The new 2012 BMW 1 Series is making friends hither and yon, but an unsourced report from the Netherlands suggests it might soon be taking no prisoners with the rumored arrival next summer of a 320-horsepower, 135i hatch. Yes, grab your salt and put on your tinfoil hat, because this appears to be the most speculative sort of speculation.

The redesigned 2012 1 Series is being launched overseas with seven choices of four-cylinder engine, the top-of-the-line being the 2.0-liter, 245-hp 128is which replaces the six-cylinder in the formerly range-topping 130i. The claim in Dutch automotive blog Driving Fun asserts that the hot hatch will get the 3.0-liter turbocharged six and enough horses to put it just shy of the 335-hp 1 Series M. What's more, it goes on further to claim a "four-wheel drive" (read: "all-wheel drive") version will arrive in December 2012.

Even if we liked such an answer, there are probably too many open questions to bother enjoying it at this point. Not that it would matter to us, anyway: were BMW ever to make such a vehicle, it probably would be too expensive to bring to America. 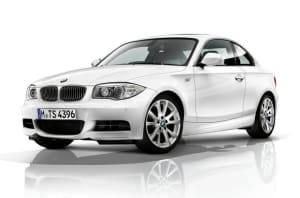