The next-generation Nissan Altima mid-size sedan will be the first Nissan vehicle equipped with the automaker's first-ever, in-house developed, front-wheel-drive hybrid system. The hybrid setup, due in 2013, will be replace the Toyota-based system, which Nissan used in the now-axed Altima Hybrid, according to Masayuki Yasuoka, a senior exec in Nissan's next-generation powertrain group.

Nissan's upcoming gas-electric setup will be loosely based on the hybrid system found in the rear-wheel-drive 2012 Infiniti M35h, meaning it will feature a two-clutch, single-motor, lithium-ion battery setup. But instead of the 3.5-liter V6 engine that powers the M35h, the Altima Hybrid will likely pack a surpercharged 2.5-liter four-cylinder powerplant, mated to a new, advanced Xtronic continously variable transmission.

All this intel was reportedly revealed during a recent test drive at Nissan's Oppama proving grounds in Japan. Yasuoka declined to comment on which Nissan model would get the in-house developed hybrid system, but the Altima seems the most likely candidate. 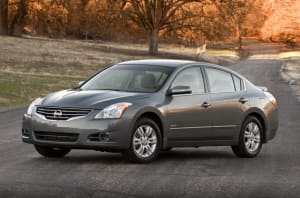