2012 Toyota Prius Plug-in to launch in Japan, Europe in January

Word is the Prius Plug-in will launch in Japan in January of 2012 and hit dealerships across Europe around the same time. Toyota is expected to price the Prius Plug-in Hybrid at around three million yen ($38,922 U.S. at today's exchange rate) in Japan and says it expects to sell 50,000 of the cord-equipped Prius liftbacks globally by the end of 2012.

For trips of less than 15 miles, the Prius Plug-in operates in electric-only mode (well, sort of). Beyond that distance, the plug-in Prius switches to its ultra fuel-efficient hybrid mode (where it's estimated to get 49 miles per gallon using the EPA's rating system), balancing motivation between its electric motor and its gasoline engine.

In Japan, Toyota will reportedly install charging stations at some 5,500 locations to support the deployment of its plug-in Prius. This subscription-based charging infrastructure will allow Prius drivers to drop in for a charge. For more details on the 2012 Prius Plug-in, check out our First Drive. 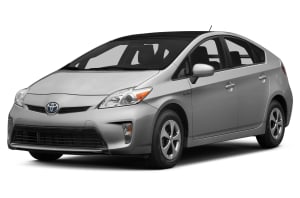