Wild bear test drives Toyota Prius, tears the bleep out of it

Eric Loveday
It was a late August morning on Lake Tahoe's western shoreline when a wild bear slid behind the wheel of 61-year-old Brian McCarthy's 2002 Toyota Prius. After clawing its way into the Prius, the bear was stuck. Eventually, the wild animal found its way out of the vehicle, but not before it took the Prius for a quick spin.

As the bear attempted to flee the Prius, it's behind-the-wheel rampage reportedly damaged the hybrid's gear selector, causing the vehicle to shift into neutral. From the safety of a nearby cabin, the McCarthy family watched as the commandeered Prius started rolling out of the driveway. The Prius rolled across the street and came to a stop in front of a neighbor's house. Brian said:

Our son was the first one who woke up, and he was watching the bear through the window. We were looking out of our bedroom window and from our view, you could look down and see the bear in the car, and its arms were just flailing all over the place, through the windows and everything.

Eventually, the bear escaped the confines of the early hybrid, leaving behind a ripped-to-shreds sedan. Their car may be totaled, but unless we miss out mark, the McCarthys did get to see firsthand the first and only time a bear has driven a hybrid. 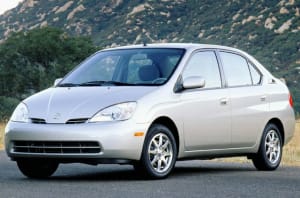