View All Specs
Add a Review
A GTI For The Masses

We've given Volkswagen a fair amount of flack for the 2011 Jetta – and justifiably so. All the things we held dear in previous generations – high-end materials, solid driving dynamics and that general sense of premium the Germans do so well – were all nixed in the name of market share.

But as we suspected, it's working. Jetta sales in the U.S. are up 74 percent over last year as consumers view the redesigned, cut-priced sedan as an upmarket contender to the Toyota Corolla, Honda Civic and Chevrolet Cruze. And honestly, more power to them.

What we've really been waiting for is this, the 2012 Jetta GLI. Packing VW's ubiquitous turbocharged 2.0-liter four-cylinder, a six-speed manual or optional DSG and an independent rear suspension, the GLI is here to assuage enthusiasts' fears that VW has lost the plot in its relentless pursuit of global market dominance. Just as Porsche hasn't given up on sports cars as it expands into un-Porsche-like segments, neither has VW in its efforts to appeal to more people. But unlike Ferdinand's second child, we still have the nagging sense that Volkswagen is leaving something on the table – despite the GLI's potential on paper.
From 40 yards out, it's hard to tell the GLI apart from a standard Jetta. Get closer and even the deeper front spoiler, honeycomb grille and vertical fog lamps pulled from the GTI do little to convey the same racy presence of its hot hatch stablemate. The standard 10-spoke, 17-inch wheels even look a little dinky in their wheel wells, despite the red brake calipers. Thankfully, an optional set of 18-inch, split five-spoke rollers (pictured below) up the aesthetic game and come coated in 225/40 R18 Dunlop SP Sport 01 AS rubber that makes for a worthy upgrade over the standard 225/45 R17 all-season Continental ContiProContacts.

The Jetta's tune changes on the inside. And to excellent effect.

Behold, a soft-touch dash; convincing aluminum trim on the dash and flat-bottom, leather-wrapped wheel; bolstered seats coated in optional V-Tex leatherette; and contrast red stitching abound. It's all a massive improvement over the bargain-basement interior we've endured in our Jetta TDI long-termer, although the GLI's plastics go from high-class to low-brow as soon as your hand ventures south (perhaps to be expected considering its plebeian roots).

But why this endless discussion of interior materials? Here's a prime example: Volkswagen is introducing its Fender Premium Audio System into the Jetta lineup for 2012. It's solid, with crisp highs and a punchy low-end when equipped in the GLI Autobahn ($25,545) and Autobahn with Navigation ($26,445) models. Forget for a moment the ironic reason why rockers started using Fender amps to begin with – artful distortion – and let's focus on the lows. When the kick drum popped at a volume level over 15 in our tester, there was a subtle rattling from the passenger-side door. A few minutes of feeling around and we finally found the culprit. The map pocket is made of low-grade plastic and the vibration from the bass rattled the cubby against the cover. Not cool, but a perfect case-in-point about why we harp on discount materials.

But this isn't a story about a reworked interior on a $23,495 Jetta (although it could be). This is about how the GLI holds up as a GTI sans-hatch. And to that end, it's exactly what you'd expect.

Clutch take-up is on the high and light side, so puttering around town doesn't require a Tour de France-honed left leg. The shifter standard VW fare, with an enlarged knob and slightly long throws providing a choice of six forward ratios. Braking is handled by 12.3-inch vented front discs and 10.7-inch solid rear rotors, all of which add up to a predictable, linear pedal feel that only began to fade after two particularly torturous runs through the Virginia hills outside VW's North American headquarters.

While the 2.0T continues to gain accolades for its linearity and tunability, VW's tried-and-true turbocharged four-pot is starting to show its age, despite a recent reworking. Two hundred horsepower was plenty for a front-driver in 2005, but consider that the Kia Optima Turbo, BMW's new turbocharged four and – hell – even the old Cobalt SS all make more ponies with the same displacement, and the GLI can't help but feel somewhat ill-equipped for the modern age, even if it gets the job done nicely. We still managed some wheelspin in second gear when planting our right foot and you can hit 80 mph in third gear if you're so inclined, but there's not much happening on the far side of the tach, despite peak horsepower arriving further along in the rev range.

The other added benefit of swapping the GTI's drivetrain directly into the Jetta is the inclusion of the XDS cross differential that's engineered to reduce torque – and thus, wheelspin – to the inside wheel through a corner. As with the GTI, the ABS-based system works, but constant flogging means brake fade comes on stronger than in something with a mechanical torque-vectoring diff. We also experienced momentary traction control engagement with the left front loaded and the right coming over a crest. That's more a product of an uneven (and likely untested) surface than an engineering fault, but considering there's no off switch for the traction control, it's worth noting.

The other core driver bits, specifically the electrically assisted steering, 15mm lower ride height and bolstered seats, are more tuned to around-town runs and freeway cruising than all-out tarmac assaults. Feel from the wheel is above-average, if not overly communicative, and the seats do their best to hold you in place, unless your personal curb weight is on the malnourished side. On the topic of tonnage, the GLI with the six-speed manual comes in at 3,124 pounds, with the DSG-equipped model slipping in just over 3,150 pounds. Compared to the GTI organ donor (three-door manual at 3,034 pounds and up to 3,160 pounds for the five-door automatic), the weight increase is negligible.

Driving the GTI and GLI back-to-back, the suspension work performed on the Jetta combined with the extra 2.9 inches of wheelbase (101.5 vs. 104.4, respectively), made the GLI the more comfortable cruiser – but at the expense of engagement. The extra weight over the rear provided by the GTI's hatch and the shorter space between the wheels made it noticeably more chuckable, with the rear rotating ever-so-slightly and allowing the front to tuck in quicker when adjusting the throttle mid-corner. The seating position – admirable in the GLI – was exceptional in the GTI, and considering the added utility of the hatch and the nominal penalty rear seat passengers pay in the legroom department (35.5 inches for the GTI and 38.1 inches for the Jetta), only regular people-schleppers and hatch-haters would be better served with the sedan.

What we're left with is an overall impression that Volkswagen has made the 2012 Jetta GLI for people who just want more. More power, more flash, more amenities and an interior that doesn't make you retch. In that, they've succeeded. But what VW hasn't made is a real sports sedan. For those people, the Golf R – despite its hatchback – is the what they're after.

Yet for the masses, the Jetta GLI fits the bill. Like the standard Jetta before it, the GLI seems to leave some of what we appreciate on the table, but in exchange nets a total package that's more endearing to the average buyer. While the GLI is closer to what we want than the standard Jetta, it's still at least 20 horses and a stiffer suspension short of ideal. And what bothers us more than anything is that we know VW can deliver it. 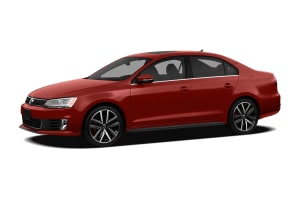