Rolls-Royce once again proves its Bespoke department knows no bounds Since its inception, Rolls-Royce has made a living making its customers feel very, very special. Given the average net worth of its buyers and the custom-tailored nature of their vehicles, this sort of approach makes good business sense. That said, some customers are clearly more special than others. Michael Fux, a businessman and philanthropist who commissioned the unusual purple Phantom Drophead Coupe seen here, is clearly one of the latter.

Fux is one of Rolls' very best customers, and he's also known for being one of its most outlandish, perpetually giving Goodwood's Bespoke department specialists a workout. Rolls has debuted one-off Fux cars during past Monterey weeks, and this year, they've teamed up again to reveal this striking purple and white Phantom. While the visuals that Fux pushed for certainly won't be to everyone tastes (we're more accustomed to seeing these sort of aesthetic choices among aftermarket firms like Mansory), there's no denying the quality of the workmanship, from the matching purple roof to the customized engraved sill plates and relentlessly white leather interior. And Fux isn't the only Rolls buyer whose tastes require an increasing degree of personalization – earlier this month, the automaker announced plans to double the size of its Bespoke operations to keep up with demand.

Fux's custom Rolls-Royce commissions have never been known for their subtlety. In the past, he's ordered a screaming yellow Phantom Convertible ( shown in Pebble in 2008), as well as a candy red Drophead that featured Rolls' first-ever black-and-red carbon fiber inserts. That car was such a test for the English automaker's bespoke team that they not only named the paint for Fux (and guaranteed its exclusivity), they produced a 2010 video about it that you can watch after the jump. 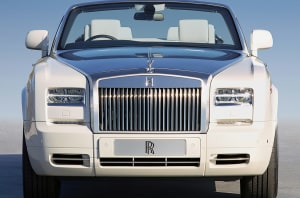