Your smug neighbors clean their clothes with Method laundry detergent, they've laid down cork flooring on their first floor and they have organic cotton shower curtains hanging in all four of their bathrooms. Driveways around the country are filled with neighbors swapping prideful mile-per-gallon figures instead of Junior's latest little league stats. Yet we fear that the term "green" gets tossed around far too easily these days. We see hybrids and electrics all around us, but most aren't designed to compete against the green yardstick that is the Toyota Prius.

The 2011 Cadillac Escalade Hybrid, for example, relies on similar tech, yet it's effectively the Toyota's polar opposite. Possessing the elegant style of a fashionable fat kid, the Escalade Hybrid manages to produce brutish noises and surprising bursts of speed. An expensive eight-passenger luxury barge, this full-size hybrid SUV could easily be dismissed as an overpriced dinosaur - especially as it has been getting a bit long-in-the-tooth while the competition has continued to evolve. GM knows this, and it's recently committed to investing a bundle into the Arlington, Texas plant that churns out the cash cow GMT900 platform this Caddy rides upon.

A replacement may be on the way for 2014, but we still couldn't help but feel that there's something compelling about this generation's sharp fenders, large rolling stock and singular swagger that's worth revisiting. Not wanting to mess about with anything less than full kingpin spec, we requested a week with the hybrid Platinum model seen here. Click past the jump to see if this baller still has game.

Cadillac has been making automobiles since 1902, but the company truly blossomed during a post-war era filled with iconically styled, hulking masses of metal. Fast-forward to 2011, and the brand's Art and Science ethos has taken hold. The Escalade integrates touches of the Wreath and Crest's design language with a giant mass of Art Deco futurism that harkens back to Caddy's bygone classics. Can you say, "222-inch-long 1957 Eldorado?"

Like the coupes and sedans before it, this Escalade features larger-than-life styling. A big, downward sweeping grille intersects massive LED headlamps. That grille, in turn, is broken up with V-cut sills and honeycomb latticework, and the chrome matches the shine from the brightly-polished 22-inch wheels.

An abundance of hybrid badging is notably absent from the exterior. Earlier model years slathered the word "HYBRID" across its flanks like neon dots on a Vegas-strip casino. For 2011, the Escalade uses much more discrete hybrid logos on each fender vent and one on its rear.

While it's no longer the Look-At-Me Escalade, this is the Platinum Series we're talking about. The interior is plush enough to make the cast of Jersey Shore jealous. They drive Escalades, too, but their rides might as well be rental-fleet Sebrings when compared to the Platinum. The Platinum's first and second rows are heated, plus the driver and co-pilot get a cooling function. Hell, the front cupholders even get into the hold-cold game. With a mount like this, it's easy for our supple journalists' hands to find comfort in the heated steering wheel, our feet avoiding puddles thanks to the power-retractable side steps. In fact, the Escalade has power everything, right down to its adjustable pedals.

Besides the variety of temperature controls, audio/visual options abound in the Escalade's cabin. A Bose 5.1 surround sound audio system pumps music through 10 speakers. Second- and third-row passengers have multiple video viewing options via a pair of headrest-mounted screens or a centrally-mounted eight-inch flip-down monitor. If the Escalade is in Park, the driver and front passenger can even watch DVDs thanks to the eight-inch touchscreen mounted in the center stack.

Interacting with the Escalade's various controls and switchgear is where this Caddy begins to show its age. This SUV isn't part of the "New GM." Playing with the switches reveals a downmarket feel that clashes with the high-class sheen of the cabin. The center console storage bin's lid feels particularly flimsy.

From the front-left captain's chair, the view is excellent off the bow and better than expected to the stern. Not bad for a vehicle spanning 202.5-inches from nose to tail. Rather remarkably, compared to its rivals, the Cadillac Escalade is actually on the shorter side. The 2011 Infiniti QX56 spans 208.3-inches and a 2011 Lincoln Navigator is 206.5-inches from grille to liftgate. Only the 2011 Mercedes-Benz GL-Class is stubbier, at 200.6-inches in length. Despite all this, the Escalade still manages to supply 172 cubic-feet of passenger volume. By comparison, only the QX56's 174 cubes offers more space, while the Benz boasts 143 and the Lincoln has just 158 cubic-feet in which passengers can get comfortable. The horror.

Once everyone settles in, you can fire up the powertrain... and hear nothing. There's definitely a 6.0-liter V8 under the hood, but when you're not moving, the engine shuts itself off. What's more, if you're light on the throttle, you can keep it dormant when cruising through the neighborhood. In fact, the gas engine can stay off at speeds up to 40 miles per hour, but getting it to do so requires the discipline of Buddha himself to pull off.

Why? When you reacquaint the throttle with the plush carpeting, the eight-cylinder engine produces a noise that we're certain haunts the dreams of Ed Begley, Jr. The 6.0-liter unit produces 332 horsepower at 5,100 rpm and 367 pound-feet of torque at 4,100 rpm. The engine may not have the slugging power of the 403-hp 6.2-liter V8 found in the non-hybrid Escalade, but this engine and motor combination still throws a punch, and puts its body into it, too.

The 300-volt nickel-metal hydride battery powering the pair of transmission-mounted 60 kilowatt motors offers a quiet contrast to the Escalade's sonorous V8. With their powers combined, they are Captain Planet! comprise the heart of the two-mode hybrid system. Working in concert, the pair can dole out a 5,600-pound towing capacity or a silent ride through the city. If you're in the mood to really burn some fuel, the run from 0-60 will take place in the upper seven-second range.

As you might expect, this Escalade Hybrid also utilizes a different cogswapper than its gas-only counterpart. The six-speed has been replaced with a four-speed automatic. This transmission, along with the hybrid powerplant, helps the Escalade sip gas at an EPA-estimated rate of 20 miles per gallon in the city and 23 mpg on the highway. While those figures don't impress in isolation, that's an improvement of seven mpg in the city and three on the highway over the standard Escalade, which is quite something in a vehicle this size.

Better still, the gas-electric Caddy remains a pleasure to drive or be driven in. It goes down the road like the pavement was finished 30 minutes prior to one's arrival. The 13-inch front and 13.5-inch rear brakes slow the titanic vehicle down like... well, like a wayward iceberg wandering into the path of steamship. Light yet responsive, the steering makes maneuvering far easier than we thought possible. We were expecting a dolled-up Chevrolet Tahoe, and we got, well, a Cadillac.

This is a modern Caddy after all, and the Escalade surprises by driving smaller that we expected. Be it changing lanes on the highway or hunting for a parking spot at the mall, the Caddy communicates clearly, and builds confidence. Body roll is kept to a comfortable minimum and the passengers in all three rows will seldom realize you're taking turns faster than you should. Punch the gas, forget about being green and watch other motorists make way.

But here's the fly in this green(ish) SUV's hemp ointment. The all-wheel drive Platinum Hybrid seen here - an admittedly loaded to the headliner example - rings up at an eye-watering $89,090. That's beyond a princely sum. Of course, a base rear-drive hybrid Slade can be had for just over $74k, or a gas-only Platinum can be had for $82.5k if that's more your bag. But none of this changes the fact that this Caddy's value equation begins to fall apart when lined up against the Infiniti and Mercedes, both of which offer far more up-to-date interiors for less money. A comparably loaded QX56 4WD, for the sake of argument, swigs fuel to the tune of 14/20, but it's much less costly at around $75,000. A kitted-out, diesel-drinking Mercedes-Benz GL350 Bluetec comes closest on the economy front, registering 17/20 ratings in exchange for your hard-earned $77,000. Our thoughts? All that extra coin spent on the Caddy could buy you a whole mess of dead dino juice.

There's no way to sugar coat this: the Cadillac Escalade Platinum Hybrid is overpriced, and it's fallen behind the competition. If you need this much space and are dead set on a Caddy, though, we can see a good argument for going with the Hybrid. At a modest premium of around $3,300, if you drive a bunch, you'll probably even earn your money back. And despite not being the latest and greatest in its class, the Escalade Hybrid remains surprisingly enjoyable to drive, and it's loaded with top-shelf features that help make it a comfortable cruiser for trips long and short. The competition may have nothing to worry about at the moment, but for the moment, this King Caddy still offers inimitable style with a green lining. 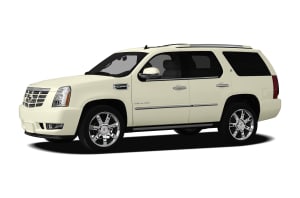