Saab appears to have beaten its short-term cash crunch (for now), making this as good a time as any to celebrate 25 years of Saab convertibles. The Swedish automaker has built 300,000 droptops since the first Saab 900 convertible hit the scene in 1986 as a 1987 model, giving the automaker a foothold in the luxury convertible market.

The first-generation 900 convertible was an unlikely hit for an automaker best known for its foul weather prowess, iconoclastic styling, turbo expertise and sensible packaging. Despite this, the 900 droptop was popular enough that it led to a 12-month waiting list, but it was the second generation 900 droptop that really made a go of it. Saab sold over 149,000 models from 1994 to 2002, giving the Swedish automaker a much-needed boost. Team Trollhättan followed that success with the 9-3 we have today, which has sold nearly 100,000 units since 2003.

Hit the jump for a more thorough rendition of Saab's drop-top history. Saab may sit in the middle of the land of snow and ice, but the Swedish automaker can definitely make a solid convertible for those days when the sun does shine.
Show full PR text
25th anniversary of launch of Saab Convertible

It all began in 1986, when the first car in a production run of just 400 Saab 900 Convertibles for the US market was delivered. Now, three generations later, almost 300,000 Saab Convertibles have been sold around the world and the drop-top from Scandinavia is established as a global icon for the brand.

Whilst Saab did not invent the segment, its Convertible has played a leading role in growing what was once a small, market niche in decline. It injected panache and real-world credibility by changing perceptions about the feasibility of four-seater, open top motoring. The fact that a car designed to exploit sunshine and warm weather should be built in a land of snow and ice added to the Convertible's mystique and its growing cult status.

Key to the Saab Convertible's abiding appeal has been its 'four-season' capability. Here was a car that worked all-year-round, and was as comfortable and enjoyable to use in sunshine or rain and hot or cold conditions.

In European markets are not known for their clement weather, such as the United Kingdom, Sweden and Holland , the Saab Convertible has accounted for as much as 50 per cent of total sales in the segment. Despite spending most of its time with the roof up and the heater on, this was a convertible that was not merely as a 'second' car, to be used sparingly when the sun came out.

Over 25 years, the Saab Convertible's success has helped to mould the shape of the automotive landscape. Today, most manufacturers offer convertible models and it was the success of the soft-top from Saab that provided their inspiration. The launch of the Independence Edition Convertible, celebrating Saab's rebirth as independent company, is now also a fitting tribute the Saab soft-top's first 25 years.

Show sensation
The Saab Convertible was born at the Frankfurt Motor Show in September 1983 when Saab surprised the automotive world by unveiling a 900 concept car with a powered soft-top.

Most of the few convertibles on the road at that time had awkward lines, reflecting the requirements of adapting a sedan bodyshape. But the Saab was different. This was a Convertible that looked good and appeared to be a unique 'bespoke' design without styling compromises. And, despite a stowed hood, there was still enough room in the back to accommodate two adults in comfort. The four season, four-seater car had been born.

Overwhelming reaction from press, public and dealers alike made a decision to take the car into production almost inevitable. But Saab was cautious about committing resources to making a car very different from its other production models.

The need to fulfill the Convertible's all-weather promise placed an uncompromising requirement on good build quality and materials. The decision was taken to use the same expert coachbuilders who had assembled Saab's show car, Valmet Automotive. Based in Uusikaupunki in Finland, Valmet is one of the world's most northerly car plants.

The first 400 cars were built for the US market. Demand was so great that people placed orders without driving the car, just as well because dealers found it difficult to keep hold of demonstrators in the face of such great demand. By the time the Convertible went on sale in Europe later in 1986 (as model year 1987), demand exceeded production capacity and a 12-month waiting list built up.

The Saab 900 Convertible was always equipped with a powered roof as standard, as well as leather upholstery. Here was an open-air car designed to withstand the harshest of Scandinavian winters. Saab had raised the bar in automotive design, showing that four season soft-top driving really was a practical proposition.

The triple layer soft-top was extremely durable, snug-fitting and totally weatherproof. Unlike many of its competitors, the Convertible had a heated, glass rear screen, not a plastic substitute prone to cracking and fogging. The exceptional power of the car's heater also encouraged the enjoyment of top down motoring in cold weather.

After its launch with a 175 hp, 2.0-liter turbocharged engine, the Convertible range was quickly expanded to include full and light-pressure turbo engines, more model specifications and top-of-the-line Aero variants. The launch of a stunning, Monte Carlo Yellow color in 1992 turned even more heads.

Second incarnation
Following the introduction of an all-new, 900 range in autumn 1993, a sleek, second generation Convertible arrived the following year under the banner: 'We didn't invent the Convertible, but we made a Saab of it'.

The new generation Convertible, and its Saab 9-3 evolution in 1998, now benefited from being part a new model program right from the outset, It was designed in parallel with its fixed-head stablemates, as its well-integrated lines demonstrated.

Saab designers now achieved a completely flat rear deck and the soft-top, soon to be hydraulically rather than electrically-powered, was accommodated under a flush-fitting 'tonneau' cover, which automatically operated as part of the soft-top mechanism. A flexible soft-top storage well in the trunk could be hitched up to provide more trunk space, and locking to the windshield header rail was made easier.

It now offers a choice of gasoline, diesel or Saab BioPower turbo engines and is built at Saab's state-of-the-art Trollhättan plant, following the transfer of production from Magna Steyr Fahrzeugtechnik, near Graz, Austria.

More sophisticated, but just as surprisingly practical as its forebears, the Saab 9-3 Convertible carries forward a rich tradition. It has always been ..... more than a Convertible.

3 most popular colors are: Black, Steel Grey and Silver

7 hydraulic cylinders are used to execute four different movements in the operation of the soft-top.

11 manual heat settings replace the automatic climate control when the soft-top is down. When it is back up, the climate control function is automatically reinstated, complete with any previously saved settings.

20 seconds is the time required to fully deploy the powered soft-top with the engine is running, making it among the fastest-acting in the premium convertible segment.

21 degrees is the ideal back-rest inclination for rear passenger comfort and this was a requirement for the 9-3 Convertible, despite the packaging constraints of soft-top stowage in the trunk.

26 meters is the total length of the hydraulic hoses used in the roof system
30 km/h is the maximum vehicle speed at which the soft-top can be raised. There's no need to come to a stop to raise the roof if it starts to rain.

140 bar is the hydraulic pressure required to operate the soft-top - 56 times greater than normal tire pressure.

181 is the number of moving parts in the soft-top mechanism. The main roof structure, including the front header rail, is made from magnesium to save weight.

366 is the number of Saab 9-3 Convertible Independence Editions being built
1,500 liters of water is sprayed over the Convertible's soft-top in a special chamber to check weatherproofing.

3,500 kilo, or more than twice the weight of the car, is the impressive load that the windshield header rail and its supporting A-pillars can carry. Necessary strength for rollover protection and good torsional rigidity. 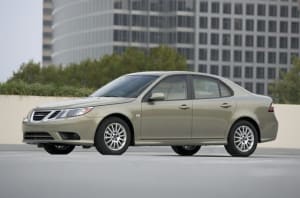