Powered by a naturally aspirated 640-horsepower V10 engine, the Lamborghini Huracán Performante Spyder is, quite obviously, fast. But a big powerful engine is only part of the Performante story. A whole host of high-tech bits and pieces combine to make this Lamborghini's most potent track weapon, from innovative composite materials to clever aerodynamic tweaks.

We just got the chance to drive the Performante Spyder for the first time on the roads in and around Napa, California. We'll have a full review coming soon, but in the meantime, enjoy this sneak peek at some of the coolest tricks Lambo has up its finely tailored sleeve. 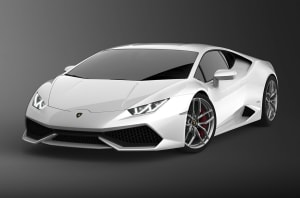 With 640 horsepower, traction must be maximized. To put all those ponies to the ground, a seven-speed dual clutch transmission routes power to all four wheels. The end result is a 0-62 mph run of 3.1 seconds, which is just .2 seconds slower than the coupe. Out in the real world, that's all but identical.

From the front of the Huracán Performante Spyder, the uniquely shaped light bars of the headlights draw in the eye, but the most noteworthy piece of technology is further below. The letters ALA are emblazoned on the car's front splitter and stand for Aerodinamica Lamborghini Attiva.

The first noteworthy fact about the Performante's carbon fiber bits is that they aren't made in the traditional method with hand-laid sheets of carbon fabric. Instead, Lamborghini developed a material it calls forged composite, where chopped carbon pieces are impregnated in a resin, pushed into a mold for several minutes, then baked at high temperatures under pressure to form complete parts.

But there's more to this front splitter than the material from which it is formed.

Business at the front, party at the back

Lamborghini’s Piattaforma Inerziale electronic brain opens or closes these ducts in less than 500 milliseconds. Not only do these active aerodynamics pieces react more quickly than competing systems that rely on hydraulics, Lamborghini claims they are more reliable and lighter in weight.

Look closely at the Performante's rear wing and you'll notice that it's hollow, with a line of thin openings on its underside. These cutouts allow an outlet for air to escape and cancel out the wing's effect when high levels of downforce aren't desirable, like when aiming for the Performante Spyder's 202-mph top speed.

The air that makes the rear spoiler work is ducted up through the wing supports on either side, and, perhaps most impressively of all, is split into two halves allowing a form of airflow vectoring. When cornering hard from side to side, the wheel that needs downforce gets it, while the other side is left alone to slice through the air.

Drop the top in 17 seconds

Aerodinamica Lamborghini Attiva first appeared on the Huracán Performante Coupe, and the addition of the new Spyder variant keeps all of that high-tech aero trickery in place. Due to the inherent stiffness of the car's aluminum and carbon fiber construction, rigidity is not lost in the transformation from hardtop to convertible.

It takes 17 seconds to lower the Spyder's fabric top, and the process can be completed with the car moving up to 30 miles per hour. A separate glass window can be raised or lowered using a toggle in the cabin. Ductwork built into the side fins just aft of the cockpit is shaped to further reduce wind turbulence.

Of course, occupants who want to be heard will still need to raise their voices to a volume that's louder than the banshee shriek of the V10 engine at its redline of 8,500 rpm. Suffice it to say, this can be a real a challenge.

This car needs an ANIMA

From the driver's seat, everything necessary to customize the performance of the Huracán Performante Spyder is within easy reach of the driver. ANIMA, Lamborghini’s drive mode system, offers Strada (street), Sport, and Corsa (race) modes, and is accessed through a red toggle at the bottom of the steering wheel.

Flip the switch from Strada to Sport and the Performante Spyder completely transforms. The exhaust opens up and backfires every time the driver lets off the gas, the stability control system adjusts to allow some slip at the rear of the car, and the steering gets more responsive. In short, don't hit Sport unless you're ready to get serious about your drive.

A set of buttons on the left side of the steering wheel allows adjustments to the Performante's digital gauge cluster. A five-second press of the middle of three buttons accesses a display that shows how ALA is currently configured, and instantly lets the driver know if the car is calling up maximum downforce or minimum drag.

Take a V10 engine producing 640 horsepower at 8,000 rpm and 442 pound-feet of torque at 6,500 rpm. Subtract 80-plus pounds through liberal use of forged composites. Add a stiffened suspension setup and an innovative aerodynamics package. The result of this equation is the most track-capable vehicle Lamborghini has ever produced with a claimed lap time of the Nürburgring Nordschleife in 6 minutes, 52.01 seconds.

Now, drop the top and cruise. Because that's the beauty of the Lamborghini Huracán Performante Spyder. It's shriekingly fast, undeniably beautiful, and somehow even feels like a good deal at its base price of $308,859. Simply put, this is the best sportscar that Lamborghini has ever produced.