The life of a fullsize pickup truck used to be easy. Not because the workhorses weren't put to the test, pulling trailers, hauling loads, and schlepping through the mud, but because they were tools expected to perform one specific job. These days, pickup owners expect a lot more from their trucks and are just as obsessed with the grain of their leather interior as they are with a class-leading spec sheet.

It's into this quagmire of disparate necessities that Chevrolet launches the 2019 Silverado. Like its competitors — specifically the Ford F-150 and Ram 1500 — GM's latest fullsize truck has to be all things to all people. A commuter during the day, a luxury car at night, and a competent weekend warrior when it comes time to work and play. After spending some time with the 2019 Silverado, we think Chevy has done a pretty good job with its latest pickup. We fully expect that it will remain a strong seller that generates a steady stream of profit for the Bowtie. But not all is perfect in Silverado-land.

Autoblog obsessively covers the auto industry. We are a trusted source of auto research, information, and automotive issues.

JEREMY KORZENIEWSKI: I am Jeremy Korzeniewski from Autoblog, and we are just outside of Jackson Hole, Wyoming to test the new 2019 Chevrolet Silverado. The trucks are big business, consistently the best selling vehicles in the United States. And if Chevy has any hope of catching Ford for the sales lead, they need this truck to be a massive success.

There are six available powertrain options on the Silverado, including a 2.7 liter turbo charged four cylinder, a three liter inline six turbo diesel, a 5.3 liter V8, and a 6.2 liter V8 with dynamic fuel management.

The most common engine you're going to find in the Silverado is going to be at 5.3 liter V8. There's actually two versions of that available for 2019. There's a carryover model that has what they call active fuel management, which allows V8 to operate on four cylinders and certain driving conditions, and that's hooked to a six speed automatic transmission.

The truck we're driving right now is powered by a different 5.3 liter V8. It has dynamic fuel management, which is a more advanced version of that system. And it's hooked to an 8 speed automatic transmission. You combine those technologies, and you get about one mile per gallon better on average, according to the EPA.

The pickup we're driving right now is the LT Trail Boss, which starts at $48,980, though this optioned up tester carries a $54,930 window sticker. With the blacked out grill punctuated by a beefy pair of red tow hooks, the Trail Boss is a ruggedly handsome truck.

The Z71 off road package comes standard, but the big selling points to the factory installed two-inch lift, Rancho shocks, and skid plates. You probably remember a few years ago that Ford made a big deal about the F150 going to aluminum. And you probably also remember that Chevy took a couple of digs at Ford because they were still using steel and a lot of people in their minds think, well, steel is a more durable material.

Well, for 2019, the Silverado does have some aluminum in it. All the pieces of the body that move on hinges, the doors, the hood, those are are now stamped out of aluminum. But Chevy says that the pieces of the truck that need to be the most durable, like the floor of the bed are still stamped out of steel, and they claim that that's going to be significantly more durable over time.

Chevy also says that by mixing up the materials, using aluminum, using high strength steel, and varying the thickness of the steel in certain places has allowed them to save quite a bit of weight. And the truck we're driving right now, which is a V8 four door model, it saves about 450 pounds over the previous generation.

Chevy says, anyone who needs to tow that much once you've passed that 10,000 pound mark, they're probably going to bump up to a 2,500. But we all know that full size pickup truck buyers love numbers, love specifications. And bumping up to a 2,500 comes with things like a stiffer ride, potentially worse fuel efficiency, and probably more costs.

The interior in the 2019 Silverado is definitely a step up from the last generation. But to be honest, it's just not good enough. When you get into a competing Ford or Ram products in this segment, you're treated to a much nicer design with what feel like higher quality materials.

Some things are pretty decent in this truck. The Trail Boss we're driving right now has a leather wrapped steering wheel that feels nice. There's some top stitching in the materials around the center stack. That looks pretty good.

But where those materials touch, the other hard plastics, they're really big gaps that don't really seem appropriate for a 2019 model, especially one like we're in right now with a sticker price of $55,000. This Trail Boss also has some hard plastic shiny trim on the doors. It's got like a cross hatch pattern into it. It's cool that they're trying to experiment with new grains and patterns and not just going with traditional fake wood, but it's a little bit odd. A lot of vehicles that you get in, especially the competing Ram products, have touch centric interfaces, where there's a lot of controls that are accessed through an LCD screen.

Not everybody likes that. And if you prefer buttons, the 2019 Silverado is probably the truck for you. There's a traditional row of buttons right down at the bottom with USB ports and power adapters. There's knobs and buttons for the climate control, traditional controls for the radio system that are duplicated and the touch screen.

That's probably fine in a vehicle like a pickup truck like this, where there's a lot of buyers who are looking for something more traditional. But if you're looking for a high tech experience, you're not really going to find it in the new Silverado.

We just spent the entire day driving the new 2019 Chevy Silverado, and there's a lot of stuff that we like, starting with the sheer number of variants and trim levels that allow a customer to choose exactly the kind of pickup truck that they want. We especially like the Trail Boss model here.

While it's not a hardcore package, it offers additional road capability over and above the standard truck. But with none of the towing payload or fuel efficiency figures beating the F150, and the lackluster interior lagging far behind both Ford and Ram, we can't fathom a scenario which sees Chevy passing Ford for the full size pickup crown. 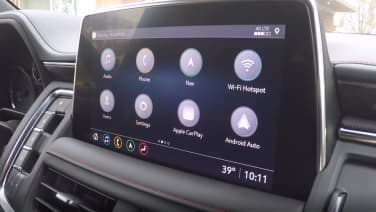 Byron takes you through the 2021 Chevrolet Tahoe's infotainment system. This 10.2-inch unit standard on all Tahoe models with wireless Android Auto and Apple CarPlay. 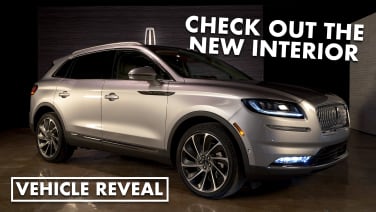 Unlike the sea creature with which it shares a name, the Lincoln Nautilus luxury crossover is steadily evolving. It was refreshed just two years ago when it adopted the Nautilus name (it was previously called MKX) as well as an updated exterior and turbocharged engine lineup. For 2021, the Nautilus … 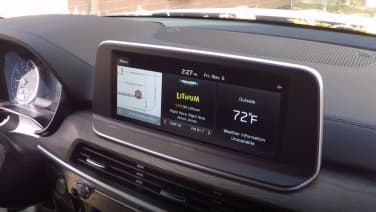 Byron goes over the 2021 Kia Telluride's infotainment and tech features, which helped earn the Korean automaker Autoblog's Technology of the Year award. 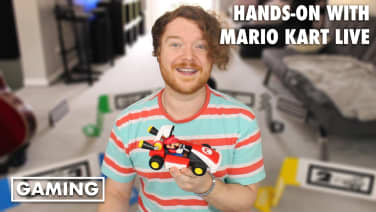 Mario Kart Live: Home Circuit is the latest offering in a long line of Mario Kart games. This version of the game has a twist, though; instead of being 100% digital, you actually control an RC kart and set up your own tracks around your house. Then, using mixed reality … 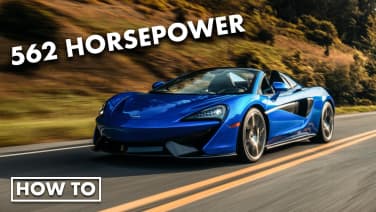 How to drive a McLaren 570S

The McLaren 570S isn't your normal car, so before you hop in and take it for a spin on some twisty mountain roads, there are a few things you need to do to get it out of your driveway without incident. Senior Producer Christopher McGraw shows you how to setup … 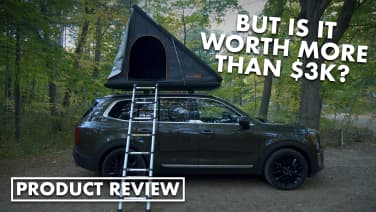 Over the past few years, I've been fortunate enough to travel, camp, and film all around the World. Usually, I sleep inside a camper van or in a tent on the ground, but this week Roofnest offered up a Falcon Rooftop tent, and because it's fall in Michigan, I knew … 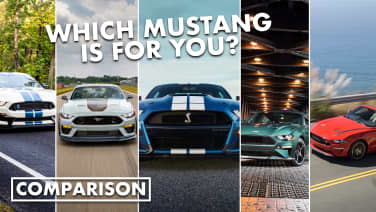 Comparing the GT500 to the other fastback Mustangs, from the most powerful, to the least.

Which Mustang is right for you? Let's look at the current fastback Mustangs and compare them from the most powerful to the least. 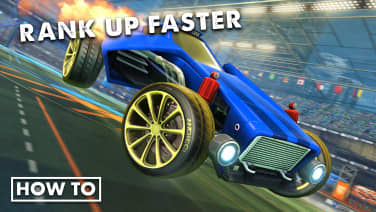 Multimedia Producer Erik shows us step-by-step how to change your settings in Rocket League to get a leg up on the competition. Now that Rocket League is #free, the playing fields just got a little more interesting. 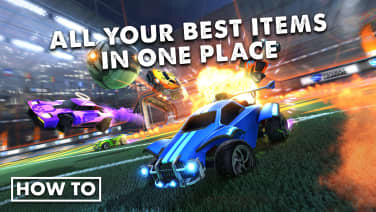 Multimedia Producer Erik Maier shows us step-by-step on how to sign in to Rocket League using Epic Games, Steam, and Nintendo Switch. Now that Rocket League is free again the playing fields just got a little more interesting. 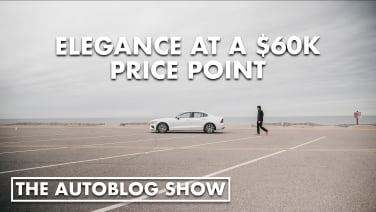 In this episode producers Alex Malburg and Christopher McGraw head to the mitten state in the dead of winter to test two very different vehicles, the impeccably designed Volvo S60 T8, and the latest generation of the Subaru Forester. 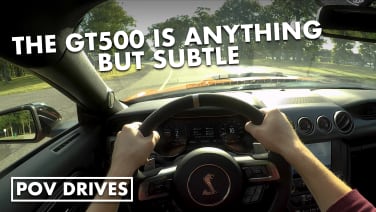 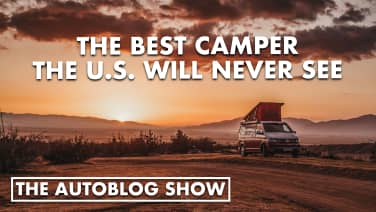 First, Senior Producer Christopher McGraw flies to L.A. where he gets to drive a vehicle that has never been sold in North America, the Volkswagen California. Then, he leaves the coast behind for Yosemite Valley, where he sees what it’s like to sleep in a luxurious, renovated Airstream at Autocamp … 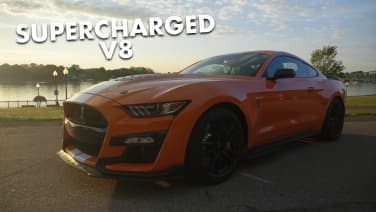 This is the Ford Mustang Shelby GT500