This Coachmen Model Tee has all the era's amenities At the intersection of the #vanlife trend, the coronavirus-inspired RV boom, and the ironic appreciation of 1970s design stands this 1977 Dodge camper van, a remarkably preserved example of the genre current up for auction on eBay Motors.

Think of how groovy your Instagram will be when you roam America's highways and byways just as our ancestors did in the post-Bicentennial era. 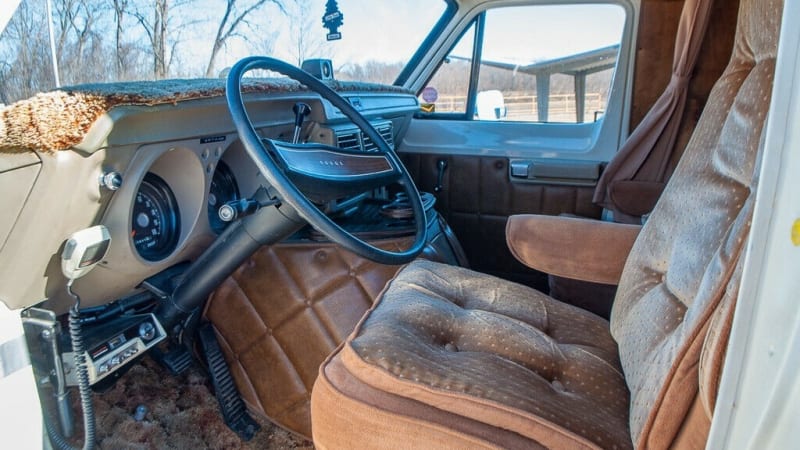 This 1977 camper van is a veritable time capsule. Based on a Dodge Tradesman B300 — the famously long-lived Dodge B-van that served as the basis of countless van conversions — this Coachmen Model Tee has everything. The orange-striped exterior sets the earth-tone mood, which reaches its apotheosis in the shades-of-brown interior. Naturally, multi-hued shag carpet covers the floors (and the dash!), but there's so much more. Dig the quilted Naugahyde on the engine doghouse and headliner, the button-tufted velour seating, the textured ceiling, and even the tassel curtains. It's like a 1970s split-level shrunk into 1/25th of the space. 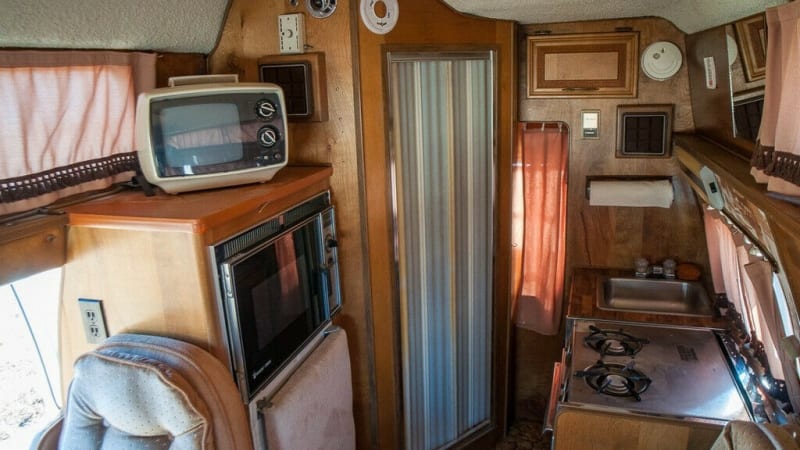 And you're not lacking in amenities. A CB radio helps you keep an ear out for Smokey. A rooftop-mounted Coleman air conditioner, a 2.5-cubic-foot refrigerator, a two-burner stove and oven, and a 32-gallon LP tank are all on hand. There's also a marine toilet and shower, a vintage microwave that looks as big as a regular oven, and a tiny portable TV to tune in Johnny Carson at the end of a long day.

Powered by a 360-cubic-inch V8 backed by Chrysler's three-speed Torqueflite automatic and power front disc brakes, this Dodge has covered just under 84,000 miles. According to the selling dealer, this Coachmen remained with its original family in Iowa until 2016 and was stored inside. The second owner undertook some reconditioning to make it roadworthy, including fresh tires on new mag wheels (the original steelies and hubcaps are included), new shocks, brake work, and more.

Now, this camper van is once again ready to see the USA, and do so in inimitable Seventies style that shades any modern-day Sprinter or Transit.