This 2021 Ford F-150 Platinum is equipped with basically all of the 2021 F-150's cool new options, including the Max Recline fold-flat seats, center console Interior Work Surface and Pro Power Onboard.

BYRON HURD: Hey, everybody. It's Byron here with Autoblog. This is the 2021 Ford F-150. As you can see, this is a platinum model equipped with the Max reclined seats. We've also got a few other neat tricks on this. So I'm going to hop in as soon as this does its thing. And I'll give you guys a little walk around on the truck. Hope you enjoy it.

OK, so now you've got me inside the cabin of this 2021 Ford F-150. This is a platinum model super crew, as you can see from the full doors. This is not the fanciest Ford F-150 you can get. That honor goes to the limited model for the time being. But this one is pretty decked out.

We've got nice interior trim, this nice leather with these fancy little badges, and some other nice touches. This also comes obviously with just about every feature you can get on one of these. We've got leather-wrapped wheel with the contrast stitching to match the upholstery. We've got the interior work surface, which I'll demo for you again here in a minute, obviously the Max Reclined seats which we've already touched on, and the fancy new infotainment system.

So I figured I'd give you guys just a quick walk around, show you where we are with the brand new Ford F-150. OK, now that I've got our EcoBoost fired up and running, you can see the infotainment screen. everything's nice and lit up. So walk you through a few of the features of the new F-150 here.

As you may or may not be able to see, depending on the angle of the shot right now, this is equipped with Ford's new propeller on board. So what you get with this is essentially a bed-mounted power distribution system that you can use to plug in normal appliances.

The system in this particular model because it's not a hybrid is limited to 2 kilowatts or 2,000 watts of power draw. And as you can see possibly from your angle, we're using less than 200 right now because this is shared with all the other systems in the truck obviously. So there's going to be some load on it no matter what.

The upgraded Max output unit actually has a split set up so that part of the circuit that you plug into in the rear is shared with cabin, including the plugs, including 110 that we have here in the cab and the bed. The other one is independent dedicated circuit. You can use them both. They won't load share. They're entirely separate circuits.

However, you will be able to see their draw simultaneously with side by side gauges in this infotainment screen instead of just the single one that we see with this particular system. And I'll remind you, you can only get the high output propeller on board if you opt for the hybrid.

With the regular gasoline engines or the diesel, you're stuck with the lower output version. As you can see, I'm sitting on the driver's side seat in Max Recline mode. Essentially all it means is that their total range of motion is effectively allowing the seat to go back almost 180 degrees.

There's no quick button that gets you there. You have to hold down the little switch on the side of the seat just like you would to lower any normal vehicle seat. But when it's in this stretch out mode, it's relatively comfortable. The only downside is there's really no support for your lower body. It may not be ideal for sleeping. But certainly it's better than what you get when you don't have this option.

Now, of course, Ford's other interior party piece is this interior workspace thing it has. So a couple things to note about this system. First of all, it only works while you're in park for reasons that will become obvious as soon as I demonstrate it to you. Second, it's perhaps slightly overengineered. We'll get to that.

So you have the vehicle in park and running as we do right now. There's a button right here forward of the gear selector that you press. The gear selector retracts. Step two, this is the hard part. Reach down, grab the handle, flip the thing forward. And there you have it-- a nice almost completely flat surface on which to place a laptop, a notebook, pretty much anything you're trying to do short of a meth lab.

The downsides to this are, first of all, it's only good when you're parked. Now, on spec, that doesn't seem like that big of a deal. But say your passenger is the one who does your paperwork for you and you just want to get to McDonald's, obviously you have a problem.

Second, we're writers, and we have somewhat active imaginations. All we can picture is the quantity and quality of debris that is going to collect inside this recess. Just imagine what that space is going to look like after the 14th time you spill a big gulp. It's a neat feature, but it's going to get sticky. It's going to get nasty. And frankly, this will probably be glued to that recess by coffee. It is pretty cool though, right?

It's one of those hey me kind of features that exists with that intersection of complexity and simplicity. Frankly, we're not entirely certain how many people use it. But we're glad it exists, especially since it gives us something to make a video about when we're stuck working from home. So just a couple more little things that I'll go ahead and touch on here while I've got you up front.

This little cubby here, which has this just delightful almost wood finish to it-- looks like a kind of composite deck boards that you might buy at Lowe's these days-- hidden beneath it, you get a wireless charging pad for your cell phone-- probably can't get any tablets in there. It's a bit small-- a USBC and a USBA port. Those are outlined in blue, which tells me they're designed for interfacing with the sync infotainment system.

Then in addition to what is in that cubby, there are redundant type A and type C USB ports on the passenger side of the interior of the center cubby. And in the back, we have yet another 12 volt, yet, another 110 volt, and, yet, another USB type A and type C. So if you want to plug something in on a Ford F-150 Platinum, [BLOWS AIR] you've got options. That's not even considering what's out back.

And while we're on the subject of power, I figured I'd bring you out back here for a quick look at the Pro Power onboard outdoor hookups. So the system, which has the, as we said, lower output set up, you can see two three-prong 110-volt plugs right there.

If this were the higher output system, there'd be 220. The basic hybrid setup supports 2.4 kilowatts. The big boy will do 7.2. That will power a lot of tailgating. There you have it, 2021 Ford F-150 Platinum. 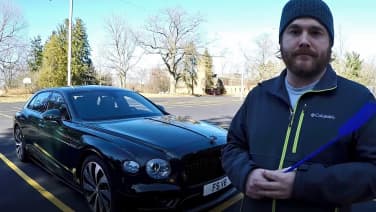 Byron's idea for a road test in the 2021 Bentley Flying Spur V8 went off the rails in a heartbeat, but what does it mean to drive an "entry-level" luxury car with an almost-$200,000 price tag? 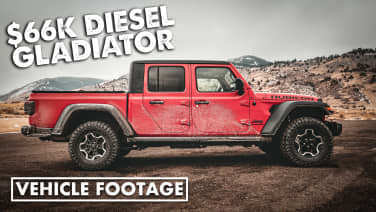 2021 Jeep Gladiator Rubicon Ecodiesel Inside and Out

It's a paradox: This is a Jeep. With a diesel, even. You could do extreme Jeep things in it (at least as its long-wheelbase breakover angle will allow). But it costs so much, you probably won’t. A Gladiator Sport starts at $35,060, including destination, not bad for what you get. … 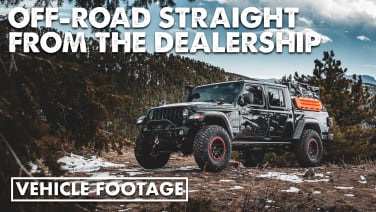 Today we’re taking a look at this RMT Overland Jeep Gladiator Sport Let’s start off with the basics. Before modification this Jeep is a Gladiator Sport powered by a 3.6 liter V6 mated to an 8-speed transmission. It features the max tow package with a 4.10 axle ratio, as well … 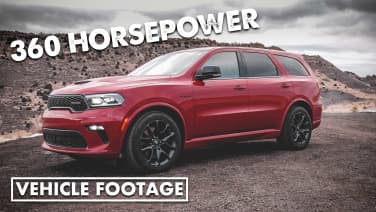 2021 Dodge Durango R/T Inside and Out

The 2021 Dodge Durango straddles the line between a car-based crossover and an old-school sport utility vehicle. It certainly looks rugged like a traditional SUV and boasts heavy-duty towing capabilities, particularly when it’s hiding a big Hemi V8 engine underhood. But the comfortable ride, space-efficient interior and reasonably good handling … 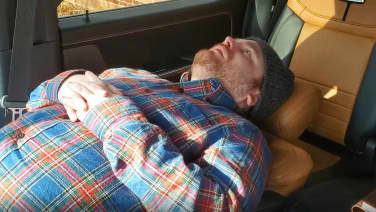 Byron contemplates the cost of modern pickups. Is he ready to make a breakthrough? 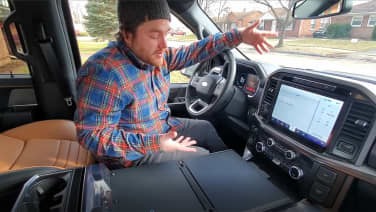 This 2021 Ford F-150 Platinum is equipped with basically all of the 2021 F-150's cool new options, including the Max Recline fold-flat seats, center console Interior Work Surface and Pro Power Onboard. 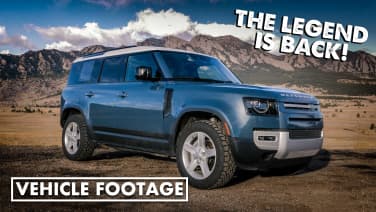 After years of false starts and dashed hopes, and further Covid-driven production delays, the first all-new Defender since 19-freaking-46 is here, including for us long-denied Yankees. And the 2020 Land Rover Defender is nothing short of brilliant, as we discovered over three days in upstate New York and the mountains … 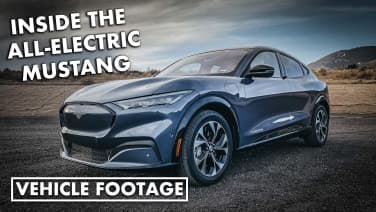 Inside the 2021 Ford Mustang Mach-E

The interior adopts the TWA Lounge look that seems de rigueur in new EVs: It’s just you and that big, 15.5-inch center screen. But where the Model Y looks a bit barren – the vinyl-clad waiting area for coach passengers – the Ford’s minimalism is joined to more-appealing design and … 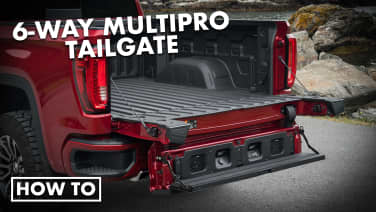 The GMC MultiPro Tailgate is a 6-way tailgate that was introduced on the 2019 GMC Sierra 1500 in 2018. Three years later, not a whole lot has changed and while the tailgate does offer quite a bit more utility than a normal tailgate, the frustrations we had when first testing … 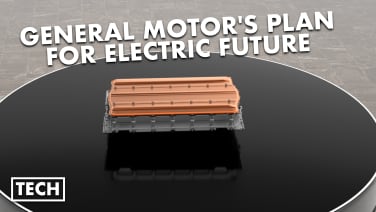 GM’s vision of the future will include a more advanced battery cell, electric vehicles, and personal air travel 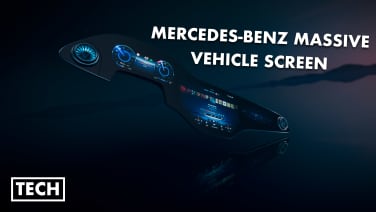 A closer look at Mercedes-Benz Hyperscreen

Rather than having a big tablet screen in the center, the Hyperscreen tries to turn the entire dashboard into a screen. It's made up of what seems to be three individual displays under one curved panel measuring 56 inches wide and powered by an eight-core CPU with 24 gigabytes of … 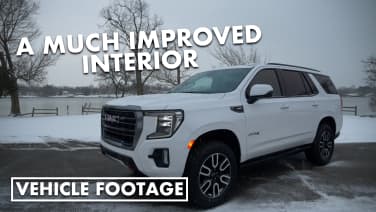 The Yukon AT4 gets an extra 2.0 inches of ground clearance with the adaptive suspension option

With Americans obsessing over trucks, it's no surprise that GMC is going hard with its AT4s-for-everybody strategy; the Yukon is no exception. This will be the first model year for the new trim on GMC's largest SUV. This off-road model gets all the goodies you'll need to veer off the … 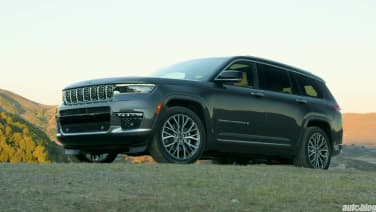 The iconic Jeep Grand Cherokee is getting a third-row for the first time in its history. Autoblog obsessively covers the auto industry. We are a trusted source of auto research, information, and automotive issues. Get more Autoblog Read: http://www.autoblog.com Like: http://on.fb.me/13uhpVb Follow: http://twitter.com/therealautoblog