Breaking out bottles, coffee mugs and my wife's purse to test the bins and cupholders

If there's one thing Honda is exceptionally good at, it's packaging. That includes managing to squeeze as much interior space from an exterior footprint as possible, and then from that, as much interior storage space as possible. Cupholders, bins, cupholders that slide to reveal more bins, under-floor storage ... each Honda has some trick up its sleeve to help you store and stuff more stuff inside.

The 2020 Honda CR-V is one such stuff-stuffing champion. Besides its copious cargo capacity, the CR-V;s front center console is cleverly designed to provide more than just a pair of cupholders and a big covered hole. To test its ability, I grabbed a disparate pair of water bottles that should provide a challenge to cupholders, made off with my wife's purse (she hasn't gone anywhere in days), and of course my iPhone. 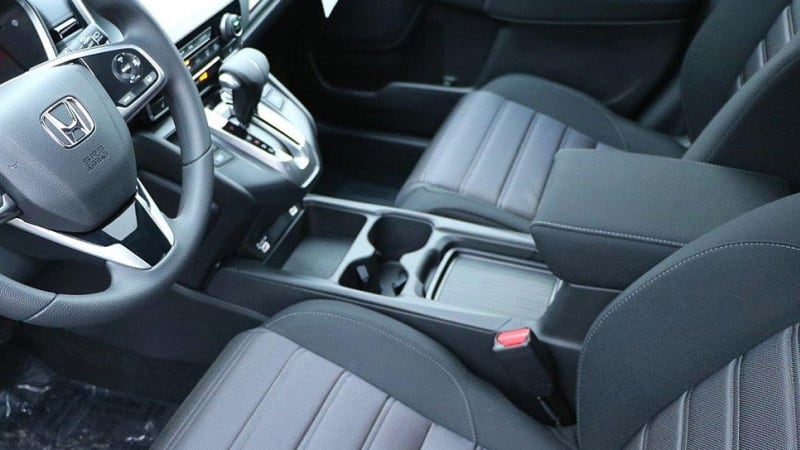 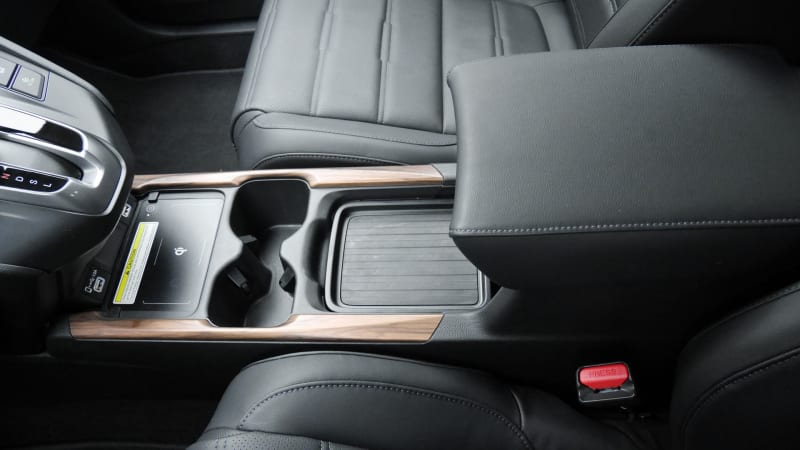 OK, first, there are technically two center console designs for 2020. The difference is the area forward of the cupholders. There is a bin there in all but the range-topping Touring trim level (above right), which received a wireless charging pad for 2020. The two CR-Vs I've tested recently have been Tourings.

Speaking of which, we might as well get that element out of the way immediately. 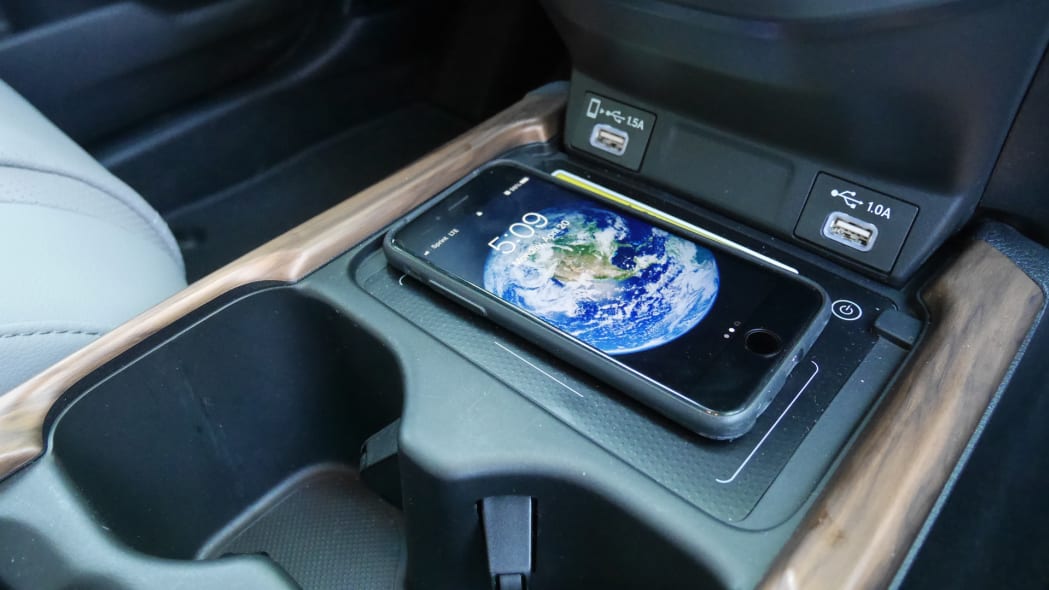 Since my iPhone isn't actually wireless charging capable, I'll just have to assume that bit of functionality works. However, I can report definitively that the pad element of the thing is poor. Quite simply, this tray is too shallow. My phone repeatedly slid out of it and flew into the passenger footwell while turning. Since this is where the USB ports are, this is also where non-wireless-charging phones must go as well (until your phone flies out of it twice and you start using the cupholder).

This is not a problem with any other CR-V trim level, meaning it won't really effect the vast majority of CR-V buyers. As you can see in the photo above, it is an actual bin that will keep your phones in place or be used for whatever else you want to drop in there. Sure, you have to actually plug your phone in, but I'd rather that than have my phone sliding around the passenger footwell. I should note that the wireless charger in the Toyota RAV4 is in a deeper bin and also available on more trim levels.

OK, now let's move on to the rest of the center console, which is shared by every trim level. Most notably, there's the flipping, sliding and disappearing bin tray. 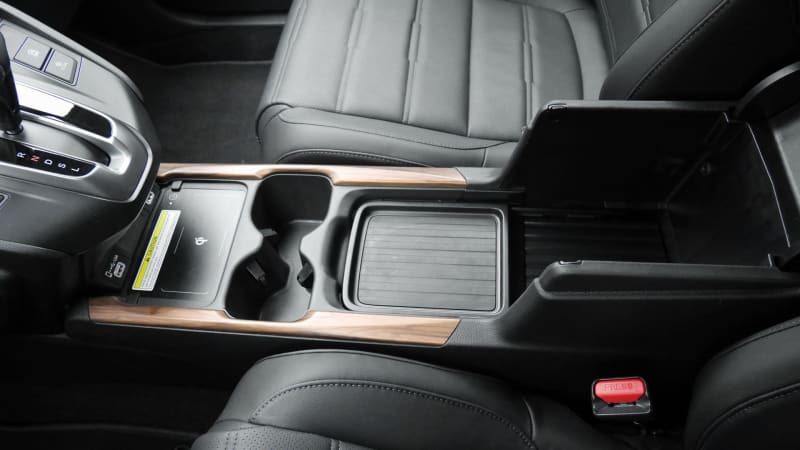 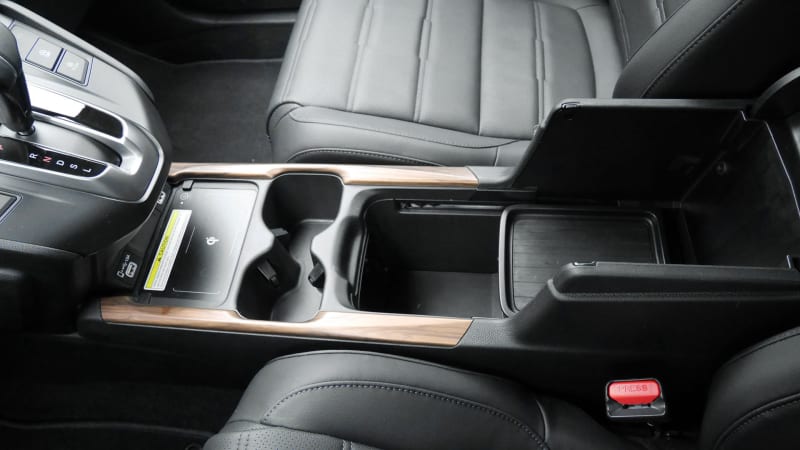 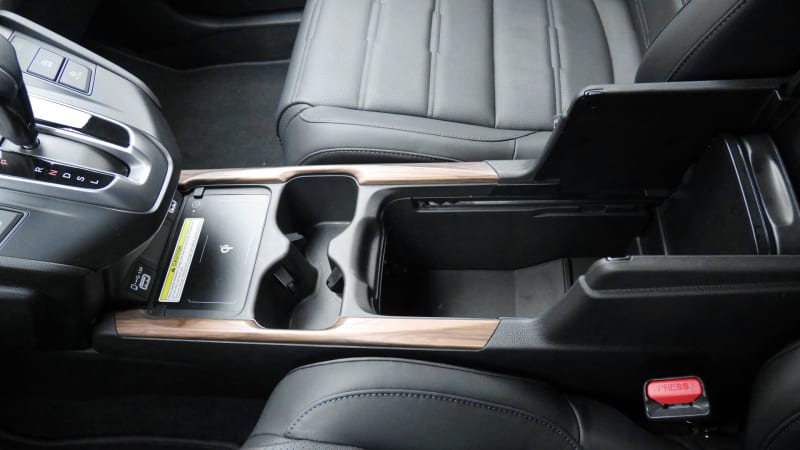 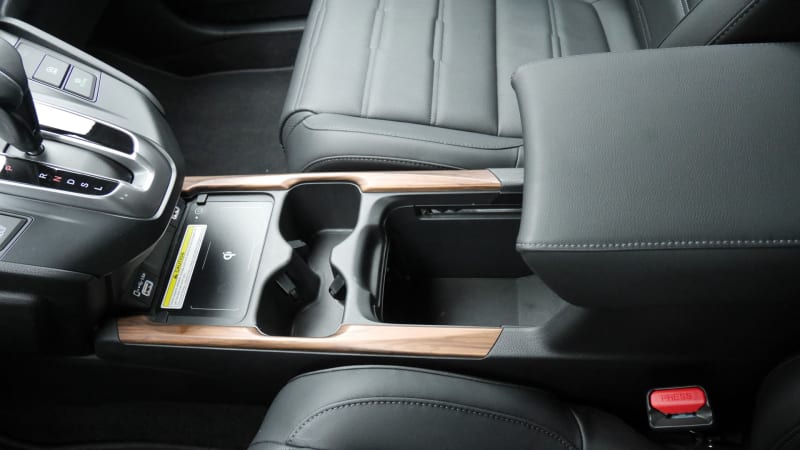 Above left: This tray with a rubber bottom allows you to place smaller items that might slide around. Alternative, you can place larger items across it and the solid piece behind it that basically form a single floor piece below the sliding armrest. That creates more of an awning rather than a roof over a fully enclosed space.

Above right: Slide the rubber tray back to gain quick access to the fully enclosed bin below. I'd say its depth is longer but a bit shallower than a typical under-armrest center console bin.

Below left: Flip the two trays up to free the entire space for larger items. How large? I'll get to that below.

Below right: Close the awning/armrest over that fully opened space for max storage and max elbow comfort. 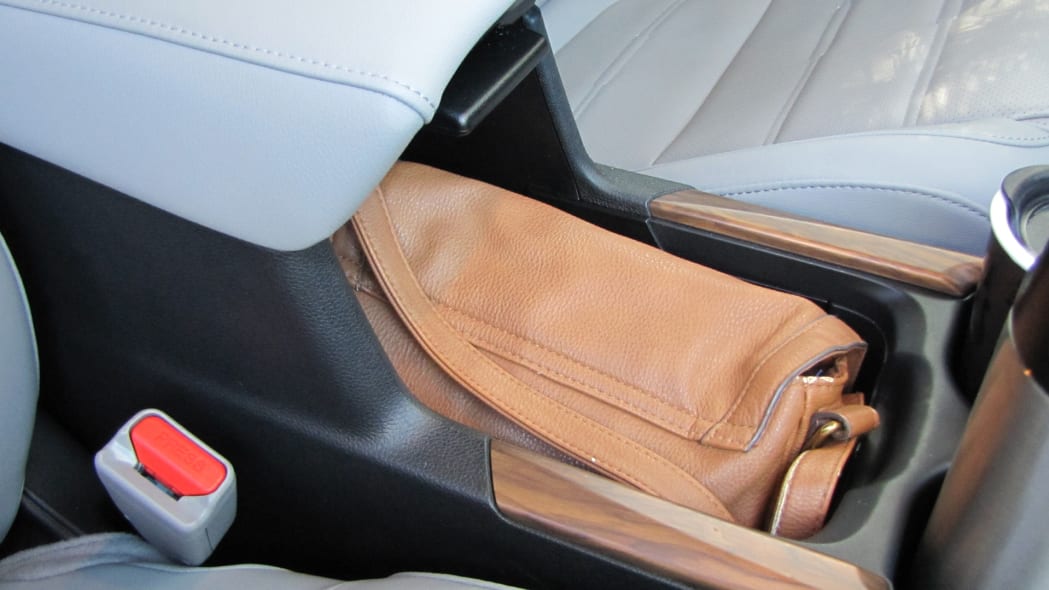 Here is my wife's purse in that bin. I couldn't cover it with those trays, so this isn't a secure location (the Pilot/Passport/Ridgeline center console does provide such a large-enough enclosed space). Rather, it's someplace better, cleaner and/or more easily accessed than the passenger footwell or seat.

A personal anecdote about this: My mother owned first- and third-generation CR-Vs, and one of the things she liked most about them was the open floor space between the seats where she could keep her purse. That open space is no longer here, but this capability seems created specifically with this preference in mind. 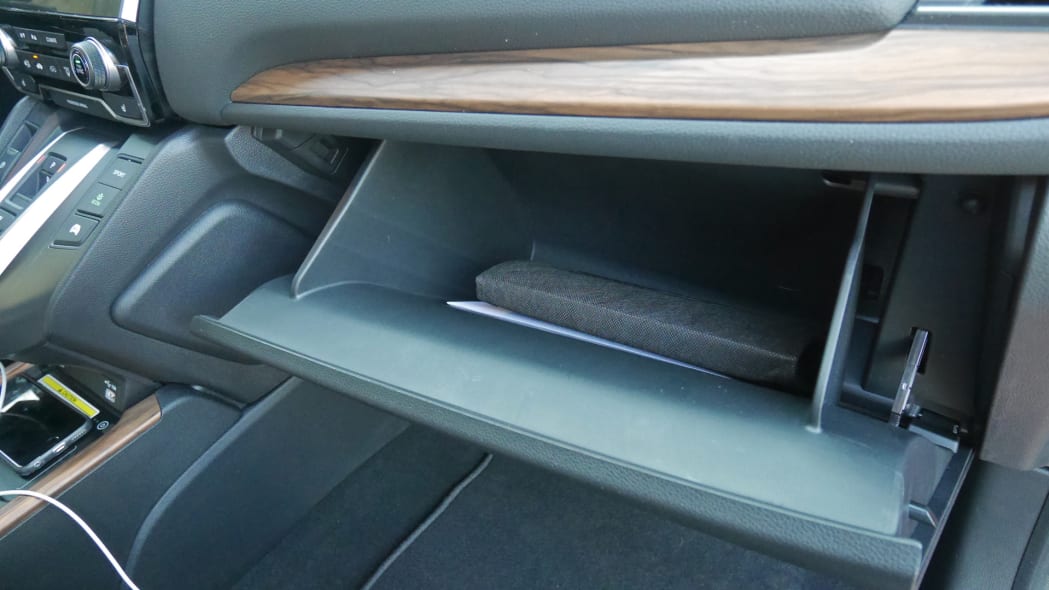 The glovebox. Pretty normal, nothing really much to say here. 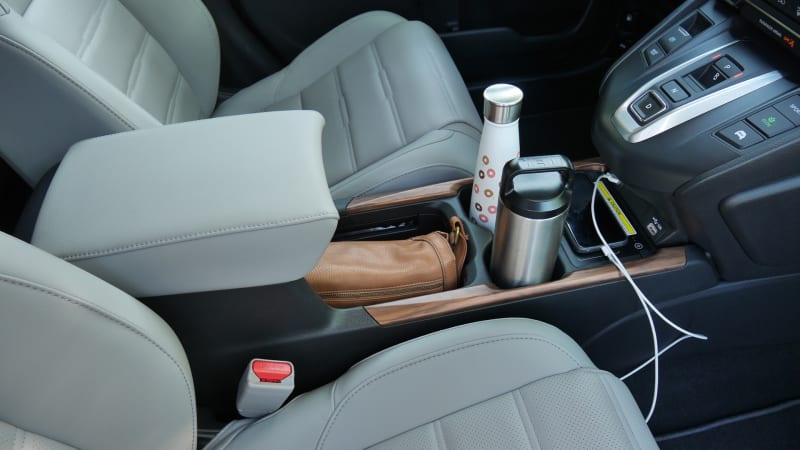 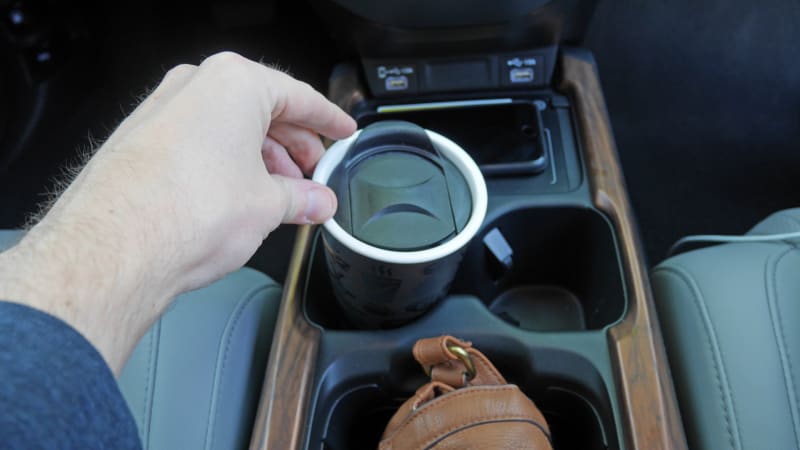 The cupholders are large and of equal depth to each other. The Yeti (silver) and doughnut print cone bottle thing have wide-diameter bases — they won't fit everywhere, but they fit here. They're also quite secure with the depth and grip provided.

The right photo shows a standard ceramic travel coffee mug. The photo above right shows how much it can move in the cupholder. Not much. That's what you want for something filled with piping hot liquid. 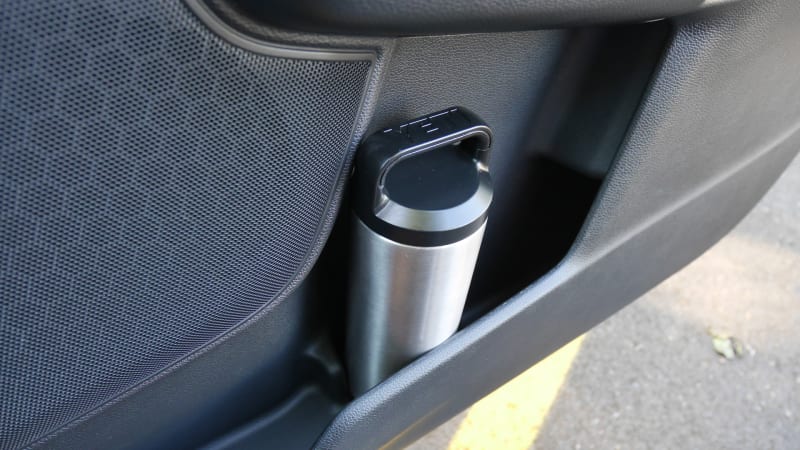 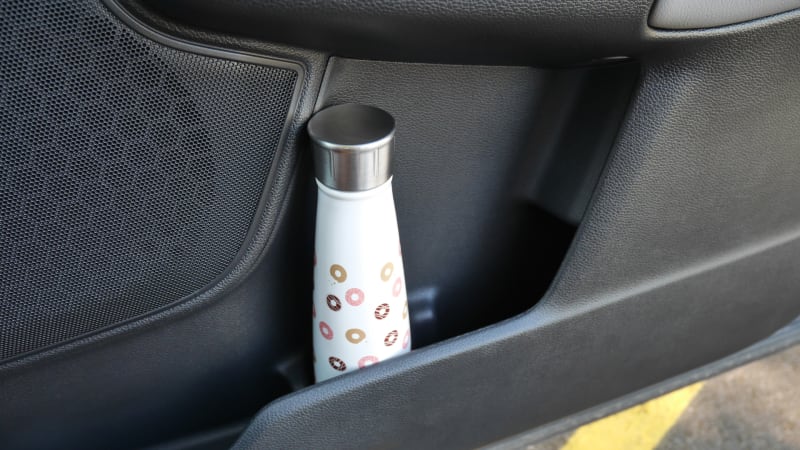 Front door bin bottle holders. These aren't that great. The speaker impinges upon their airspace, and the bin area technically isn't wide enough for the bottles. However, the door's plastic is thin enough that it flexes to accommodate the bottles. Yay? Basically, these could be bigger ... 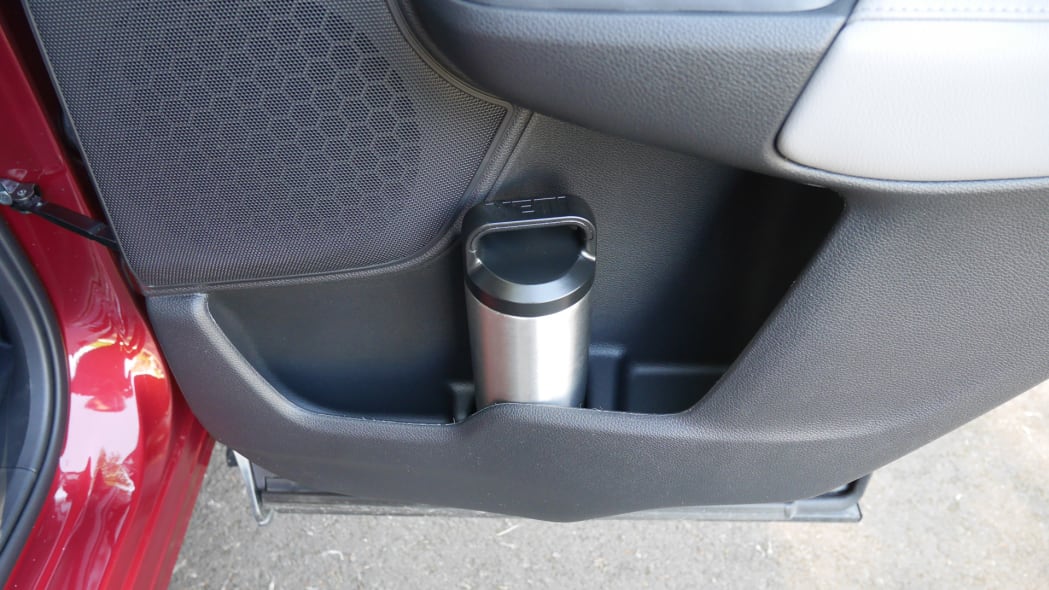 ... Just as those in the back doors are. This bin is wider and the speaker is higher, freeing up more spot for bottles. This is good because ... 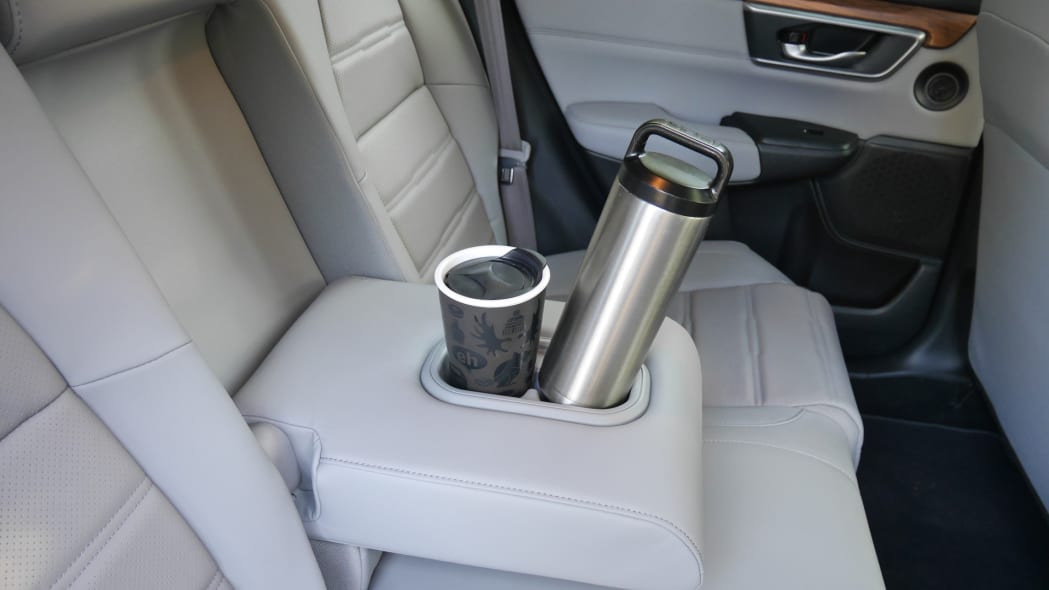 ... The flip-down armrest cupholder is no bueno for the bottles. Its diameter is too narrow. The coffee mug fit perfectly, however. These and those in the doors are the only cupholders in the back seat.

So there you have it. The door bins could be a bit more useful and the Touring trim's afterthought wireless charging pad is poor, but in total, the CR-V's interior storage is thoughtful, versatile and genuinely useful.

And if you're wondering how it does at large item storage, check out our luggage test comparison with the CR-V and RAV4.

$1,440 - $3,099 Nat'l avg. savings off MSRP
See Local Pricing
I'm not in the market for a vehicle at this time. Please move this suggestion to the side for 30 days.
Huge Savings