Is this a look at Dodge's next design language?

FCA design boss Ralph Gilles doesn't want to see yellow spoiler guards on future Dodge models. He joined the chorus of internet users urging Challenger and Charger owners to remove the protective strips installed at the factory by telling the story behind a futuristic-looking design sketch on his official Instagram account.

The stylist explained the coronavirus work-from-home order isn't stopping his team from organizing design reviews. And, while he's not normally allowed to post images of future products on social media, he decided to make an exception. "This experimental design of a Dodge of the future fell on the cutting room floor ... because the designer decided to make the yellow spoiler guards a permanent part of the theme," he wrote.

This isn't the first time Dodge has spoken out against owners who decided to keep the yellow spoiler guards on their car. The company even recently decided to make them pink to curb their popularity.

We are still having virtual design reviews while we self isolate & work from home... While we are NEVER to show future product on social media. I have made an exception this time as this experimental design of a #Dodge of the future fell on the cutting room floor...because the designer decided to make the yellow spoiler guards a permanent part of the theme. We had a really good laugh about it though! #fcadesign

Looking beyond the spoiler's yellow accents, the sketch depicts what appears to be a coupe with a front end that shares very few styling cues with Dodge's current design language. The round headlights seen on cars like the Challenger are replaced by ultra-thin LED lines, the grille is little more than a gap, and there's a gaping air vent right below it. The entire front fascia is painted black, a look oddly reminiscent of SEAT's Bocanegra models.

Sculpted sides, wheels that stick out of the wheel arches, and a glass roof add a finishing touch to the design. Gilles only posted one sketch, so we don't know what the rear end looks like. His team is busily designing the next-generation Challenger, tentatively due out by 2023, but we don't expect it will look like the sketch that surfaced on Instagram. Mark Trostle, Dodge's head of design, previously affirmed the retro lines are here to stay.

The four-door Charger is due for a makeover, too, and its design isn't as firmly anchored to tradition as the Challenger's. Time will tell whether the sketch subtly previews the direction Dodge is taking the model in. 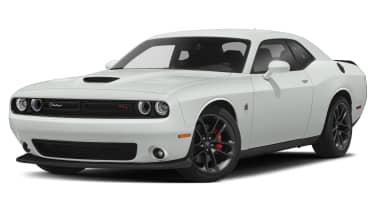 $728 - $1,759 Nat'l avg. savings off MSRP
See Local Pricing
I'm not in the market for a vehicle at this time. Please move this suggestion to the side for 30 days.
Huge Savings