All the drive components are made by VW

Hailing all fans of the Volkswagen Microbus. VW has a special treat for you today, and it’s electric. A new team effort between Volkswagen Commercial Vehicles and eClassics has resulted in the creation of what VW is calling the “e-Bulli.” Just so everybody’s up to speed, “Bulli” is the popular German nickname for what we generally refer to as a Microbus.

Volkswagen and eClassics have collaborated on an old VW before, too. See the classic electric Beetle from last year. And the occasional electric Microbus has popped up on our radar before. This 1972 prototype and this e-Golf powertrain-swapped example are a couple we’ve covered previously.

This new e-Bulli has an especially tantalizing proposition that comes along with it: You can buy one. Volkswagen says the van was meant to make a physical debut at Techno Classica 2020 in Germany, but like everything else these days, the event was postponed. Therefore, VW is taking the wraps off this van via a press release today. The project is comprehensive and impressive, so let’s dig into the details.

The donor van you see here spent its life on the roads in California before being pulled for electric duty. Its four-cylinder boxer engine was swapped for a new electric motor that makes 82 horsepower, nearly doubling the original van’s output. Torque is more than double the original output, as it’s all the way up to 156 pound-feet. A one-speed gearbox was then fitted, and the van is electronically limited to 81 mph. It’s no scorcher, but VW engineers and eClassics have given the old Microbus a significant performance bump. 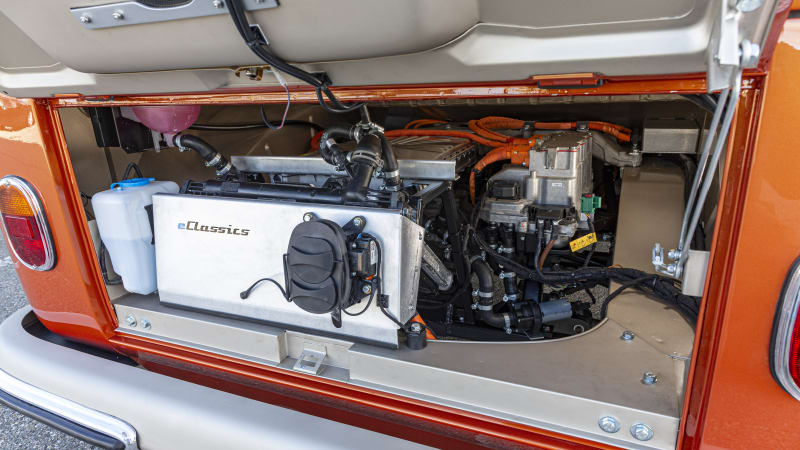 All of the drive components are positioned in the rear of the e-Bulli to drive the rear wheels, as is proper. Along the vehicle’s floor lies the 45 kWh battery pack, good for “more than 124 miles” when fully charged. The battery is capable of DC fast charging, “with up to 50 kW of charging power.” In 40 minutes, the battery can drink in an 80 percent charge when being charged at its maximum level. Owners can expect reliability from the redone Microbus, too, as all the drive and battery components are supplied by Volkswagen.

Both the chassis and design were fully worked over for the project, too. VW says it has a new multi-link suspension in front and rear, plus it also has adjustable shocks. A new rack-and-pinion steering system was put in, and four-wheel disc brakes were installed. We imagine all this new componentry gives the Microbus a much more modern and dynamic feel on the road. 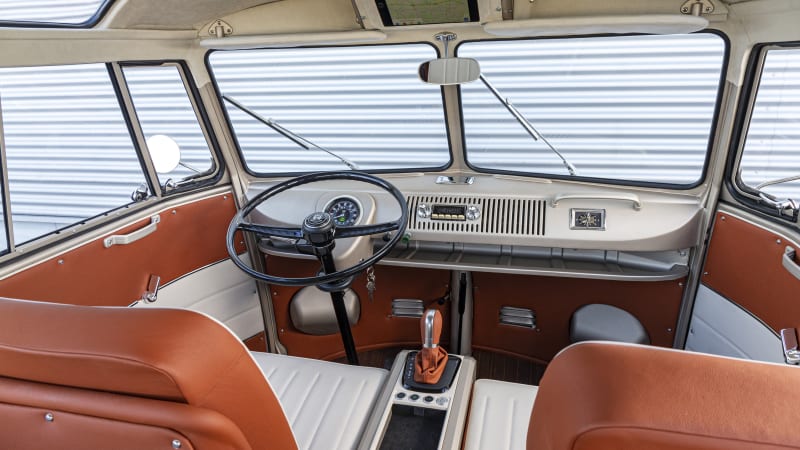 Designers swapped all the old lighting fixtures with LED tech, and there’s even an LED charge indicator on the back of the van. The orange paint is called “Energetic Orange Metallic,” and it’s complemented by the cream-hued “Golden Sand Metallic Matte.” The interior went through some wholesale changes, as well. All of the seats are new, and so is the drive interface, as it has a gear shifter in the center console area. All of the flooring is made out of wood to simulate the “look of a ship’s deck” — VW was aiming for a maritime feel for the cabin.

All of this can be had for a price, too. The e-Bulli conversion (not counting the cost of the donor bus) is being offered by eClassics for 64,900 euros. In case this T1 conversion doesn’t fit your fancy, eClassics says it will convert both T2 and T3 vans, as well. Converted from euros to U.S. dollars, you’re looking at about $70,000. If you want one, you’ll need to get in touch with eClassics in Germany, because they won’t be showing up on dealer lots anywhere in America.