No, it wasn't featured in Ford v. Ferrari How many would-be racers, celebrities, and just-plain enthusiasts piloted this Austin-Healey Sprite around Riverside raceway and received driving tips from Carroll Shelby? Quite a few, we'd imagine, as this was a longtime instructor car at Shelby's school of performance driving in the 1960s. And while you've missed your chance to get driving instruction from the legendary Le Mans winner and Cobra creator, it's not too late to acquire this piece of Shelby history, which is headed to Barrett-Jackson's January sale in Scottsdale, Ariz. 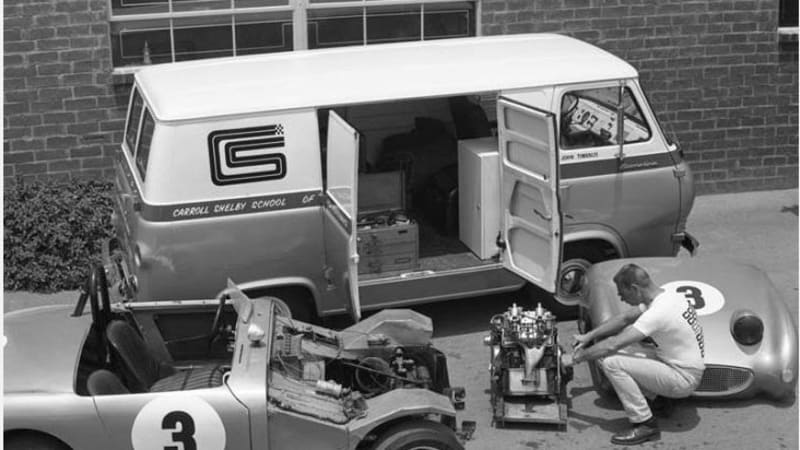 This 1959 Sprite is said to have been used as a training car at the school for five years or so. Here it is getting some maintenance work done back in the day. (We would love to see that Ford Econoline van make a reappearance, too.)

The Sprite is powered by a 948-cc inline-four backed by a four-speed manual gearbox and features five-point harness for driver and passenger, a fire extinguisher, and a roll hoop. After Shelby transferred ownership of the school to Bob Bondurant in 1965, the Sprite went to the manager of a Porsche dealership in Pennsylvania and was used in SCCA events. The car has undergone a restoration and comes with material documenting its history. It's being offered with no reserve. Here's hoping the new owner has a chance to take it around Riverside.