The specs say it has as much cargo space as a Jeep Renegade. Really?!?

The Alfa Romeo Stelvio is quite obviously more about Sport than Utility, especially the high-octane Quadrifoglio you see here resplendent in Alfa Rosso paint. Frankly, I wasn't expecting much from its luggage-hauling potential. After all, according to the specs, it has only 18.5 cubic-feet of space behind the raised back seat, which is quite simply terrible. That's the same as a Jeep Renegade, which is considerably smaller on the outside. Based on past luggage tests of SUVs with a comparable cargo number, there's no way all the bags from my garage will fit. In fact, there's a good chance multiple bags would be staying at home or riding on people's laps.

Well, let's put that assumption to the test. 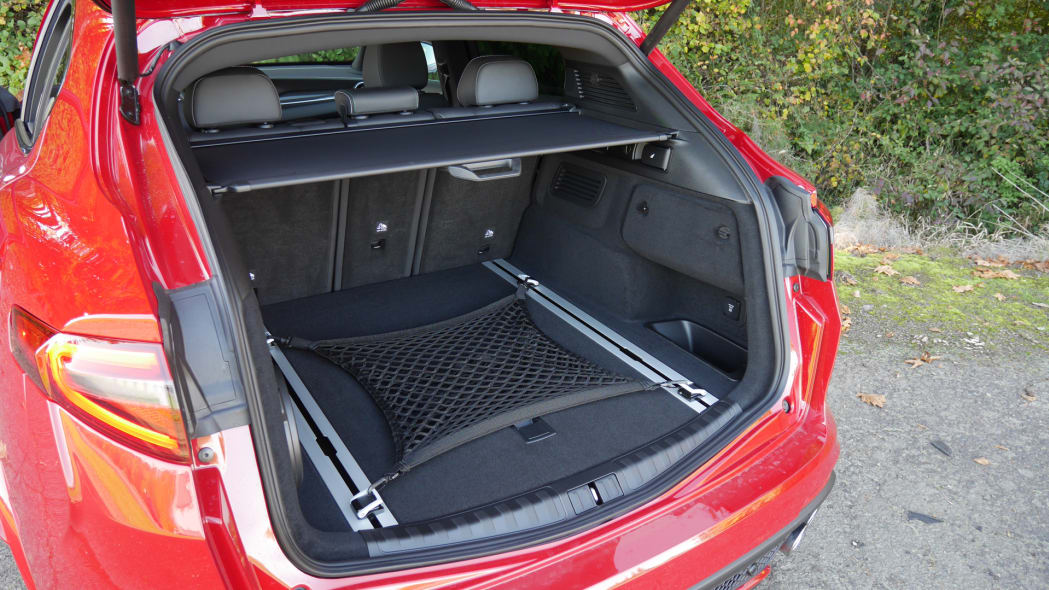 Here's what the Stelvio has going for it. Sure looks a lot bigger than a Renegade. Actually, it looks bigger than the Range Rover Evoque, which has 21.5 cubic feet.

As you can see, this particular Stelvio came equipped with a cargo rail system and net. Those clasps are easily removed by lifting up on the little handle and moving into that wider part of the track. 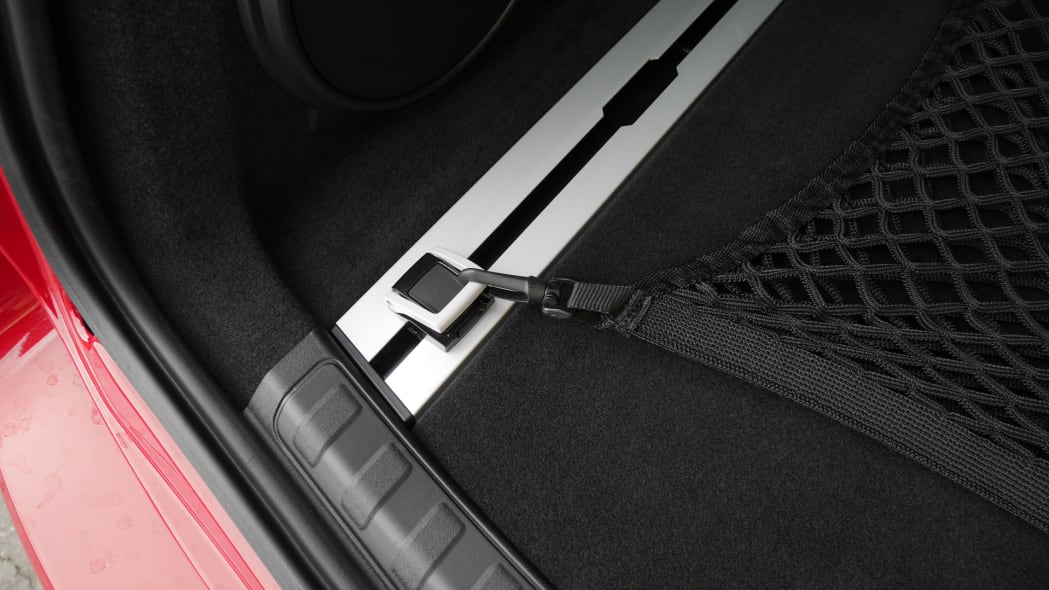 Now, you'll note that the Stelvio has a cargo cover like virtually all SUVs, but this one is a little different in that it's in two pieces. A smaller one that rolls out from a cartridge aft of the back seat, and a semi-rigid piece that connects to the liftgate. 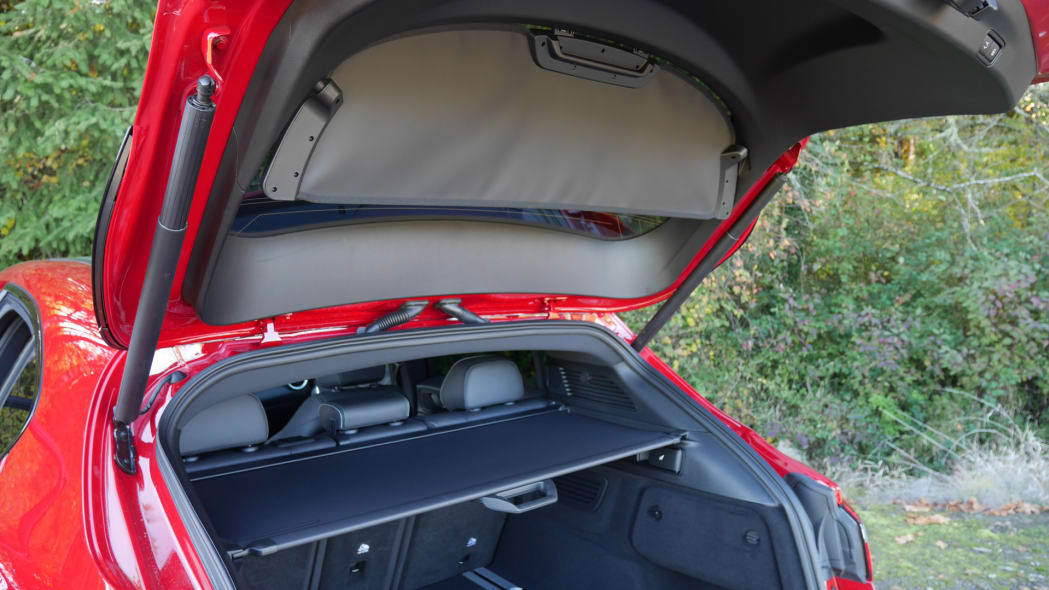 As always, I started off by keeping the cargo cover(s) in place when trying to stuff as much of my luggage as possible in the back. 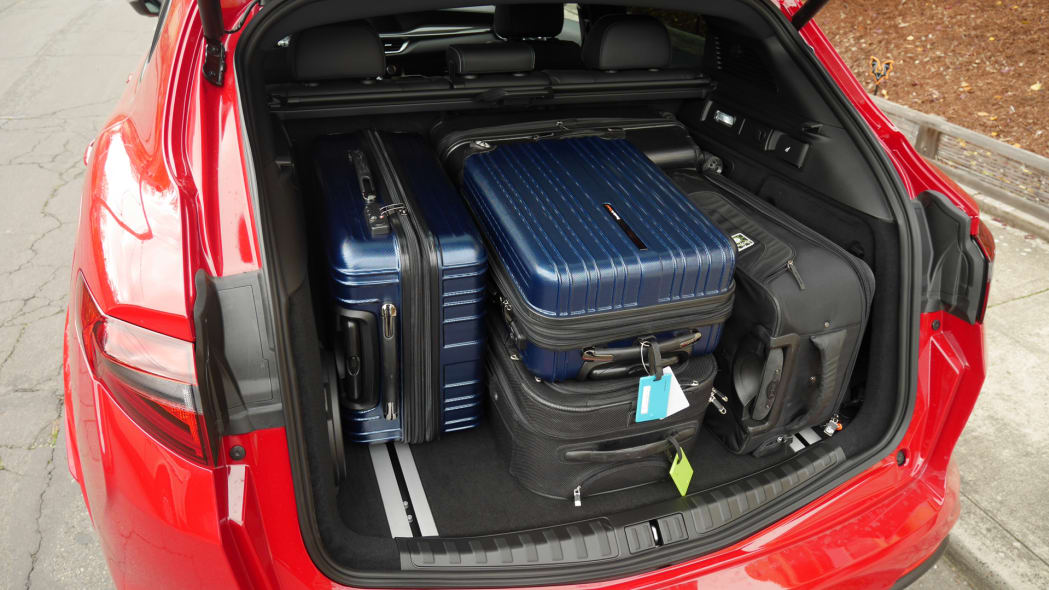 As it turns out, the cover cartridge didn't impede loading at all. I'm guessing because the reel is smaller, but either way, this is a real benefit. It means you don't have to find someplace to store the damn cargo cover if you're picking someone up at the airport, for instance, and discover their bags are too big.

However, you'll note (maybe) that my wife's fancy bag is missing from this luggage Tetris ensemble. That's because it got caught on the rigid cargo cover attached to the tailgate when placed atop the bag on the right. OK, then, let's remove that. 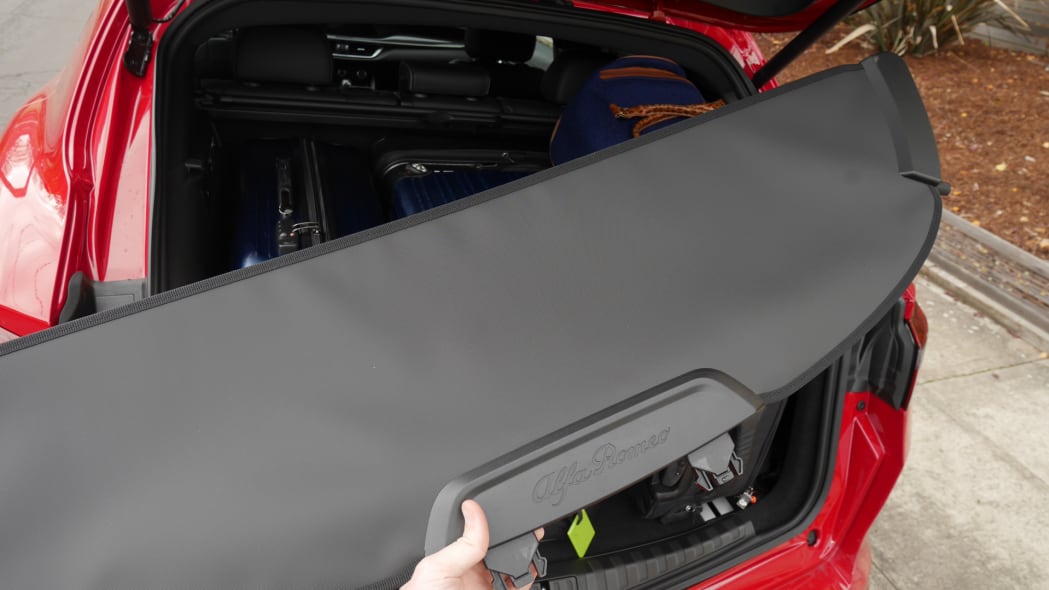 Basically, you just yank the thing out. Not too complicated. So, with it removed, the fancy bag fits easily under the window ... 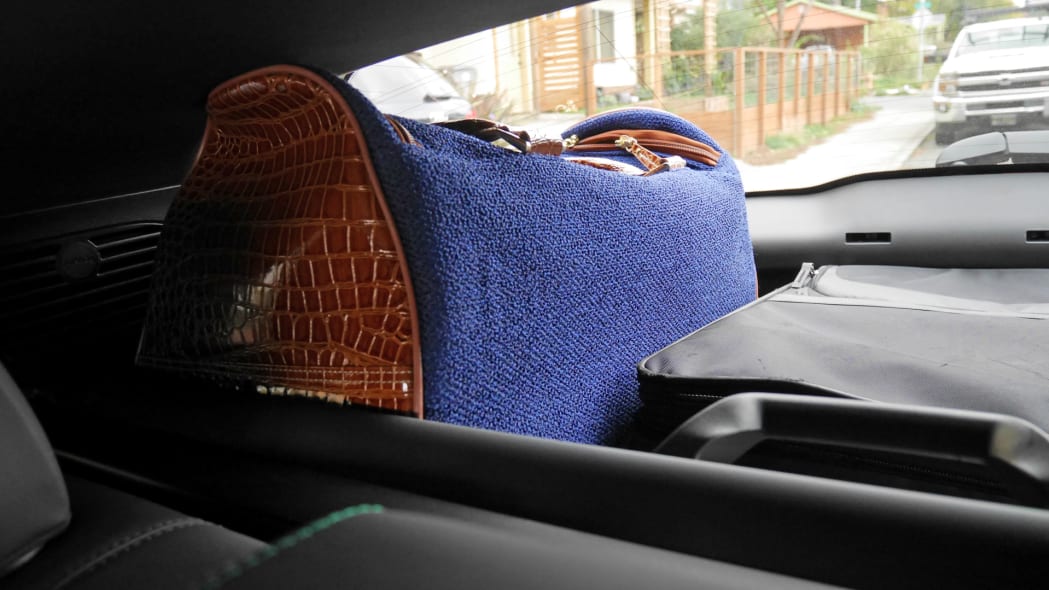 ... Doesn't impede the rear view and seems unlikely to fly forward in the event of a sudden stop. 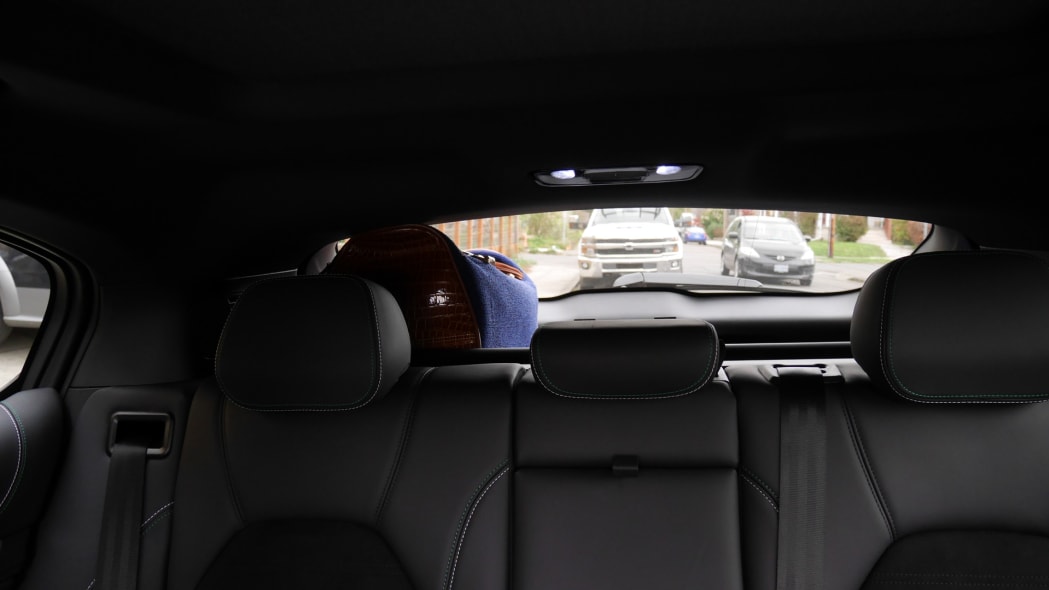 As such, the Alfa Romeo Stelvio can fit all of the luggage in my garage, which means there's something fishy about that 18.5-cubic-foot number. I'm guessing it's the result of Alfa not measuring to the roof while other car companies perhaps do. Or in the case of the Audi Q3, using a sliding back seat to get tricky with the numbers.

Either way, Alfa Romeo is selling the Stelvio short when it comes to cargo space. It's still not huge — a Mazda CX-5 is larger, for instance — but it's not as uselessly small as the official number would suggest. The maximum cargo capacity number of 56.5 cubic feet seems more realistic.

Moving beyond capacity, here are other worthwhile cargo features in the Stelvio. There are pulls in the cargo area that unlatch the back seats to fold forward (though you still need to manually push them a bit). 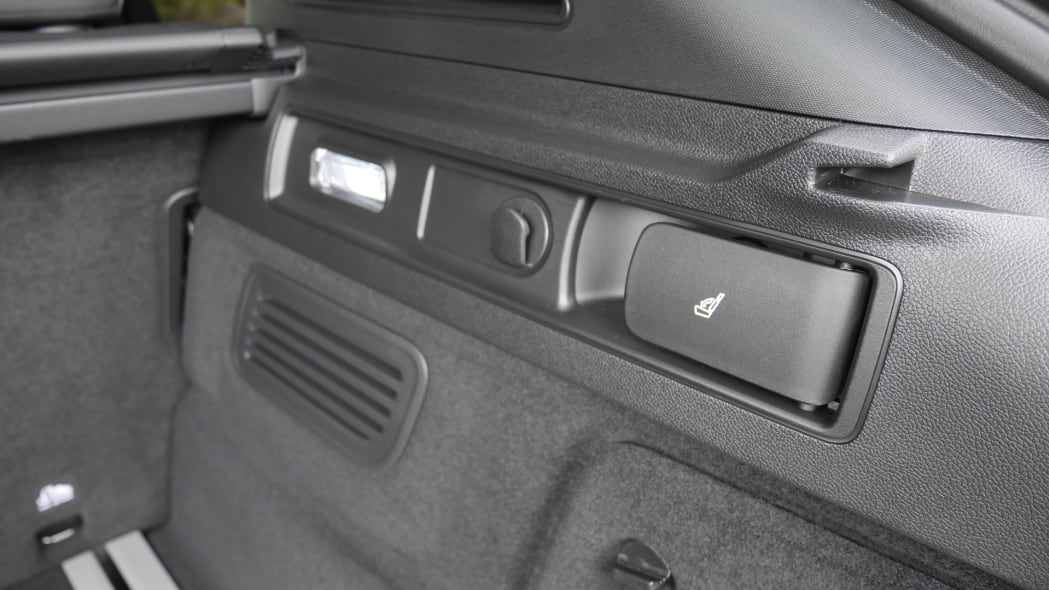 And the Stelvio does one better than the Honda CR-V's of this world by putting redundant pulls in the back seat as well. Nifty. 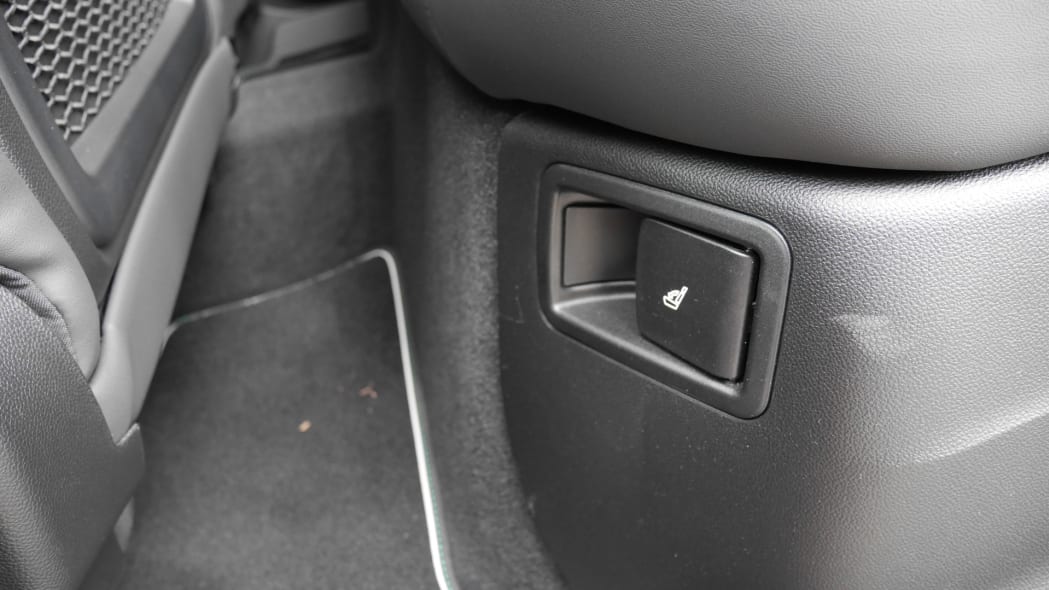 And finally, one more cargo feature: the back seat is 40/20/40 split meaning you can fold down the middle portion for some extra space. It didn't really come into play in this test, but it's there and it actually folds near flat. 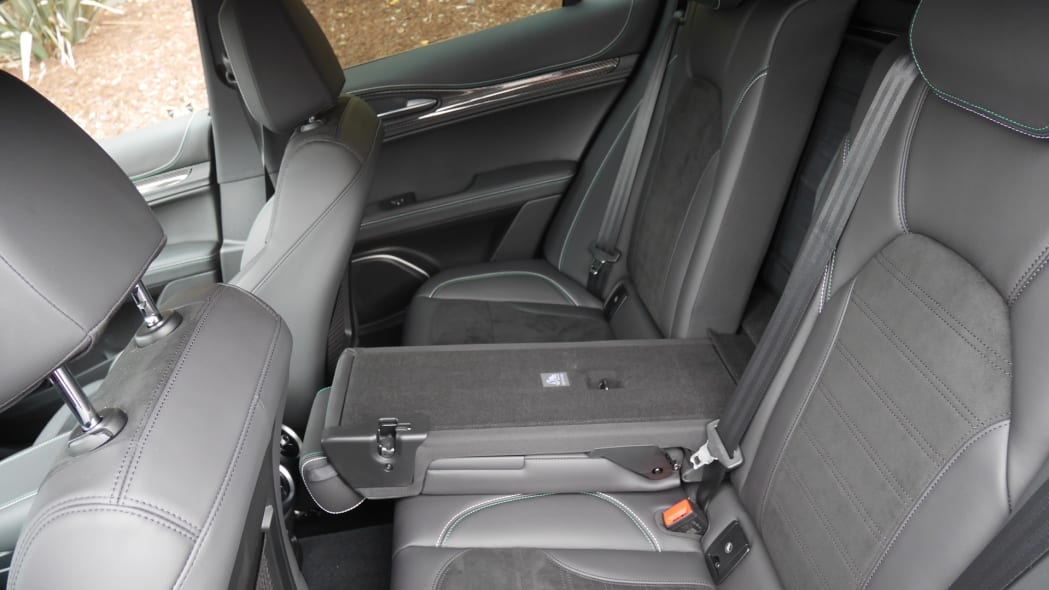 So, in total, the Stelvio is much more about Utility than it would initially seem.