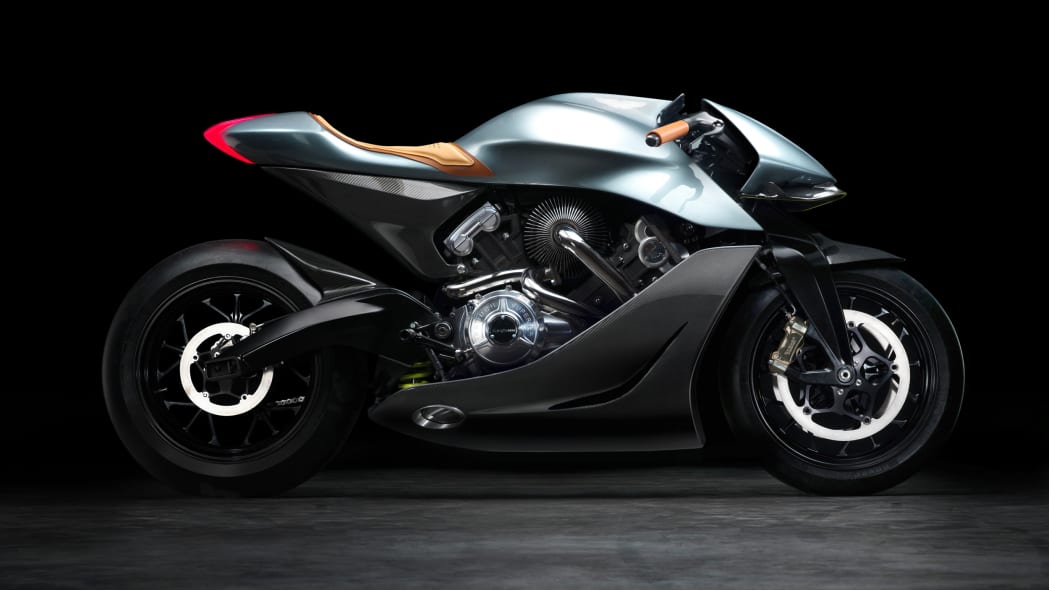 Aston Martin has taken the wraps off a limited-edition lightweight racing bike called the AMB 001, its first-ever motorcycle, at EICMA in Milan, revealing a sculpted, vaguely retrofuturistic melding of form and function that is the first offering from a new partnership with English bike maker Brough Superior Motorcycles.

Featuring a double wishbone front fork, the track-only bike represents a marriage of Aston’s design and Brough Superior’s engineering. It’s inspired by Aston’s current crop of mid-engine sports cars, presented in the brand’s racing colors of Stirling green and lime essence with matte black wheels, forks and brake assemblies mixed in with unadorned carbon fiber. The latter material features on the signature fin, which derives its design from the side strake on Aston cars and which runs atop the bike along the length of the gas tank, under the saddle and out back.

Another carryover is the same stainless-steel ultra-light wings that feature on the Valkyrie sitting under the lacquer of the bodywork on the nose and tank. There are also aerodynamic wings attached to the cowl on the front of the bike that harken to the S-curve on the front of an Aston Martin to apply downforce. Carbon fiber figures in the body structure, and titanium and billet aluminum feature elsewhere. The hand-stritched saddle is made of Oxford tan leather.

The bike is powered by a V-twin turbocharged engine that makes its first appearance on a Brough Superior bike. It makes 180 horsepower, although there’s no information offered on top speed. The bike’s dry weight is just under 397 pounds.

Just 100 examples will be built at the Brough Superior plant in Toulouse, France. Starting price is 108,000 euros (about $119,809 at current exchange rates), including a 20% VAT, with first deliveries expected in the fourth quarter of 2020.