City leaders say it could've been worse without them

Trump's tariffs still enjoy support in the Rust Belt communities that helped elect him in 2016. But U.S. Steel's layoffs, first reported by Reuters last month, demonstrate some of the risks he faces as he seeks re-election in 2020.

Steel prices peaked in May 2018 and have retreated to pre-tariff levels after American factories boosted production and demand weakened.

In June, U.S. Steel idled a blast furnace at the local Great Lakes Works plant in the cities of Ecorse and River Rouge in Michigan, an electoral swing state. Two months later, the company decided to temporarily let go of 48 employees and warned of up to 200 more layoffs by the end of September.

In the primary metal manufacturing industry in Wayne County, Mich., home of Great Lakes Works and "The Twin Steel Cities" of Ecorse and River Rouge, employment in March was down 3.3 percent from a year earlier.

City leaders said that without the tariffs, the situation could have been worse, noting that as far back as 2002, the local plant was on the verge of closing.

"Imported steel was killing us," said River Rouge Mayor Michael Bowdler, a democrat, who was laid off in 1981 from Great Lakes Works. "Something had to be done."

Last year, U.S. Steel restarted two blast furnaces and hired back about 800 workers at its Granite City plant in Illinois. Trump declared in front of cheering workers that U.S. Steel was "back".

Since March 1, 2018, U.S. Steel's shares have plunged 76% on softening steel prices and concerns about its debt-fueled investment program. The Pittsburgh-based company's reliance on the auto sector has exacerbated the pain, and data compiled by Goldman Sachs shows U.S. Steel's production costs are among the world's highest.

Last week, U.S. Steel warned that falling steel prices would make its third-quarter loss steeper than expected. It said the blast furnace at the Great Lakes Works plant will remain idled through at least the end of the year.

It has proposed a $600 million investment to upgrade Great Lakes Works and make it more efficient, a commitment local officials called encouraging. But U.S. Steel wants a tax break from Ecorse and River Rouge to carry out the investment, which will not create new jobs.

It has negotiated a similar tax deal in Gary, Ind. 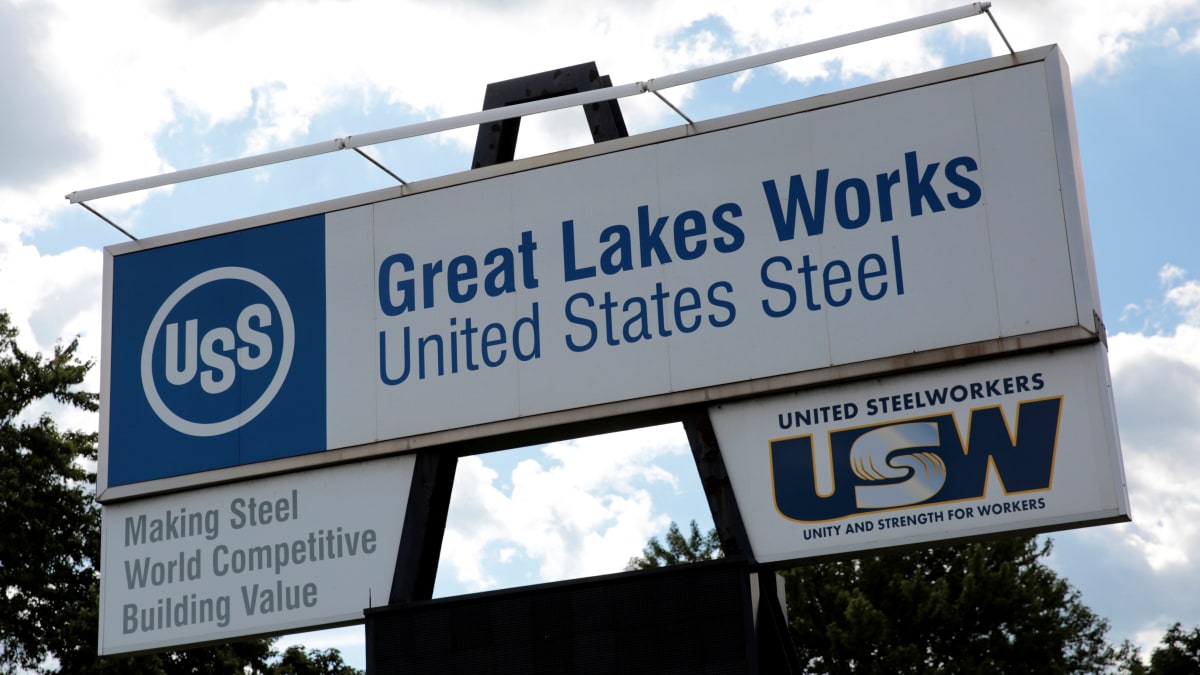 But widespread support for tariffs from members of both parties in manufacturing communities has made it difficult for Democratic candidates to campaign with a distinctive message in swing states like Michigan, which Trump won by less than 11,000 votes in 2016.

A majority of manufacturing workers surveyed in a recent Reuters/Ipsos poll had a favorable view of Trump's policies concerning them.

"We wouldn't have the demises of some of these industries, had we done this 30-40 years ago," said James Perry, executive director at the Downriver Community Conference (DCC), which runs retraining programs for laid-off workers in Southeast Michigan.

U.S. Steel is the largest employer in the two cities and among the biggest sources of revenues.

The steelmaker accounts for a third of Ecorse's revenues. City officials are also eyeing another $100,000 in new revenues from the company's proposed investment at Great Lakes Works. That is a lifeline for the city of 9,600 residents, which until two years ago was battling a financial emergency and was run by a state-appointed emergency manager.

The city of River Rouge, which was under Michigan's financial oversight for six years, gets 60% of its revenues from U.S. Steel and DTE Energy. But the Detroit-based energy company has announced it will close its River Rogue plant in 2021.

In Ecorse, U.S. Steel runs internship and job shadowing programs for students and pays for the city's annual fireworks.

In December 2008, the plant was shut for nine months, with more than 2,000 lay-offs that in turn hurt restaurants and retailers in River Rouge, aggravating the city's fiscal crisis.

When the plant reopened, Bowdler said, excited residents came out in hordes to watch thick clouds of white smoke billowing from its chimneys. Some city officials had tears in their eyes, he said.

The latest layoffs are a blow to employees and families. A laid-off worker from the Great Lakes works said the unemployment benefits of up to $362 a week were not enough to pay her bills.

"You can't survive on that," Perry agreed.