A big ride for an even bigger family

The Beauchene family technically needs a Palisade plus a Santa Fe to fit mom, dad and 10 children, but there's no doubt each of them will enjoy the free eight-passenger SUV they just received from Hyundai nonetheless. After the Beauchenes were featured on "Good Morning America" for adopting four siblings into the already eight-person family, Hyundai reached out with a bit of karmic repayment. The Korean manufacturer wanted to give back to people who had so selflessly put others' needs before their own.

The Beauchenes first popped up in headlines in November 2018 when GMA featured the family in a segment called "Tell T.J.," which highlights feel-good stories around the country. Father Don and mother Michelle, who already had six grown-up kids between ages 18 and 29, were planning an empty-nest retirement of their dreams with motorcycles, boats, and a move to Florida in their sights. But then Michelle met Lily, who was a foster child at the school where she worked.

They instantly fell in love with Lily and decided to adopt her into the family. Then the foster care facility that had Lily asked the Beauchenes if they wanted to foster or adopt Lily's just-born sister who was also heading into the system. Then the Beauchenes found out Lily and Lucy had two older siblings, Jamiee and Jeremiah. Jamie, who has biliary atresia, a rare disease of the liver and bile ducts, and Jeremiah later picked their own names to be Brooklyn and London. Don and Michelle said yes to them all, and the four kids are now reunited under one roof in one extremely loving family.

Hyundai first invited the Beauchenes to the 2018 Los Angeles Auto Show to witness the debut of Hyundai's biggest vehicle ever, the 2020 Palisade. But that wasn't the end of the line. As Palisades started to hit dealerships for the first time this year, Hyundai gifted a Palisade to the family at Preston Hyundai of Boardman, Ohio.

Check out the full story and see the Beauchenes interview on GMA here: 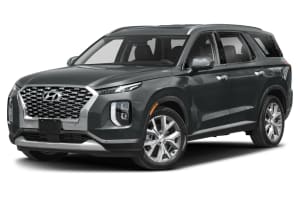