The long-awaited full redesign would seem to almost be here 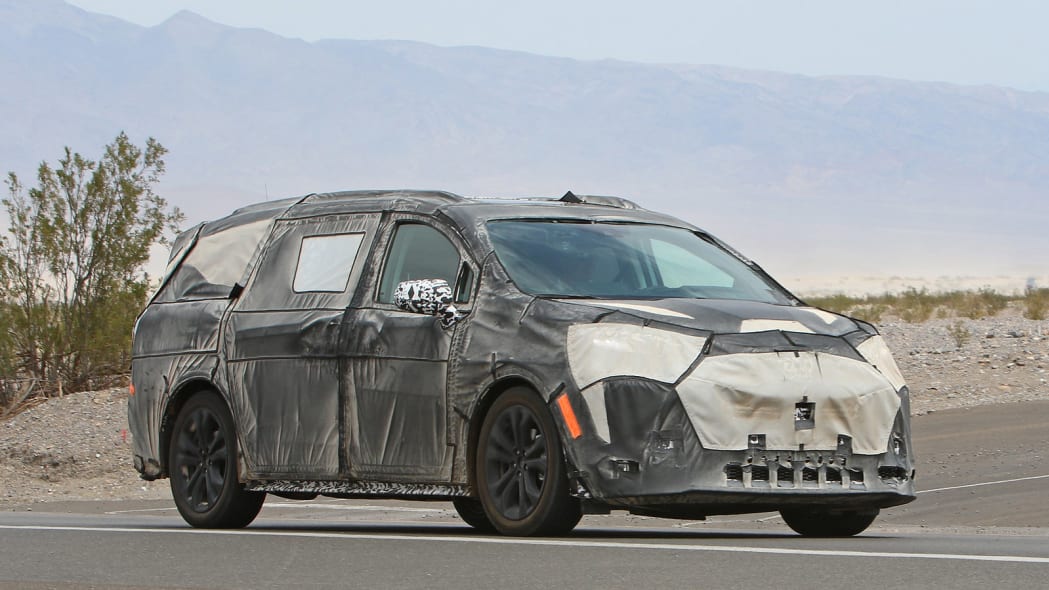 It seems like we've been writing "the Toyota Sienna enters yet another year without a full redesign" forever at this point. The current generation dates back to 2011 and is continuing into year 10 as we detail in our 2020 Toyota Sienna review. Now, there was a substantial overhaul of its interior and structure for 2015, while the powertrain was replaced two years later, and other important updates to its feature content made thereafter. In the meantime, though, the Kia Sedona and Honda Odyssey were completely redesigned and the Chrysler Pacifica became a thing. The Nissan Quest was reborn and died again. Nobody seemed to notice.

Anyway, the Toyota Sienna is extremely long in the tooth, but these fresh spy photos would indicate it's finally going to see the dentist. That's how that metaphor works, right? Though covered in copious black plastic, this is most definitely not yet another warmed over version of the current van. Note the door mirrors migrating to the doors and the little quarter window above it now residing adjacent to the main front side window rather than within the A pillar. The rear quarter also appears quite different, possibly indicating some sort of rising element not unlike the Lexus RX. Of course, that bit of camouflage could also be a leftover from an old RX test vehicle being used to throw us off, but it seems likely that Toyota would try to make that area more interesting given its recent over-the-top styling as well as what was done with the past two Honda Odysseys. The big wheels, lower grille mesh and flared rocker panels suggest that this particular next-generation Sienna is an SE, the "sportier" trim level that boasts tighter suspension and steering tuning (current version shown above). Much like it did with the recently redesign Camry and Avalon, it seems reasonable to assume that the dynamic gap between the Sienna's LE and SE trim levels would narrow given the handling improvements inherent to Toyota's TNG platform that assuredly underpins its new minivan.

Despite the new platform, we expect the current powertrain to carry over mostly unchanged apart from perhaps a minor power bump. We also wouldn't be surprised to see a new Sienna Hybrid, as most TNG cars are available as hybrids. Would it be a plug-in as the Chrysler Pacifica hybrid is? That's questionable.

Given how comprehensively wrapped this test vehicle is, it seems like the next-generation Sienna is awfully close to completion. We wouldn't be surprised to see it shown at the Los Angeles Auto Show in November or even earlier. Sales probably wouldn't be too long after. That would certainly help explain why the 2020 Sienna was announced so early.