Dutch coachbuilder will make you one, too, if you want

As much as we love shooting brakes, since they're basically two-door wagons, the world clearly isn't willing to buy them. Most remain concepts or just designs. But someone took up Dutch coachbuilder Vandenbrink on its design for a Ferrari 612 Scaglietti shooting brake. The company finished the car this year, and the results are impressive.

The shooting brake's roof fits the existing roofline of the Ferrari well, and the car's signature wide haunches haven't been hidden. The hatchback also looks like Ferrari included it from the beginning, making the car look like a precursor to the FF and GTC4Lusso. The skylights in the roof are also fascinating, and they surely make the rear seats less claustrophobic. Vandenbrink's choice of the 612 Scaglietti is a good one, too, even if it was partly dictated by the fact the company penned this design over a decade ago. It's a classic grand touring car designed to be fast but comfortable. Its large size, particularly its prominent prow, suits a long-roof design, too. The one part we slightly question are the rear pillars, which even with some creases to break them up, look a bit large and out of place.

This is currently the only example of the 612 shooting brake, but Vandenbrink is happy to build additional cars on request. The company says it will work with buyers every step of the way to make sure their example is customized exactly as they wish, from the paint to the equipment. Vandenbrink even suggests it could make one geared toward horse riding or falconry. There's no price for the vehicle, though, which is probably due to the fact that each one will be custom ordered and the cost will vary. And this is undoubtedly a car you can't afford if you have to ask the price. Vandenbrink is also happy to create one of a few other sports cars, such as a roadster version of the 599 GTB Fiorano. All you have to do is ask and bring tons of money. 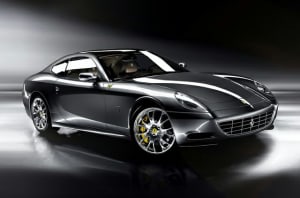