Both Ferrari and Lamborghini still outpace the British supercar brand

Zac Palmer
Nearly two and a half years ago we wrote a story about McLaren building its 10,000th vehicle since its reentry into the road car market. Today, McLaren built its 20,000th vehicle (a 600LT Spider in Chicane Grey) since its revival. For a bit of perspective, it took the British supercar maker a little over five years to build the first 10,000 cars. Now it has managed to build the same amount of cars in half the time.

This doesn't exactly come as a surprise, as McLaren has far more models now than when it started with only the MP4-12C in 2011. Even as McLaren truly takes up its place as a "high-volume" supercar manufacturer, it's still smaller than Ferrari and Lamborghini. The prancing horse managed to move 9,251 cars in 2018, while McLaren built just 4,806. Lamborghini did slightly better at 5,750 cars. 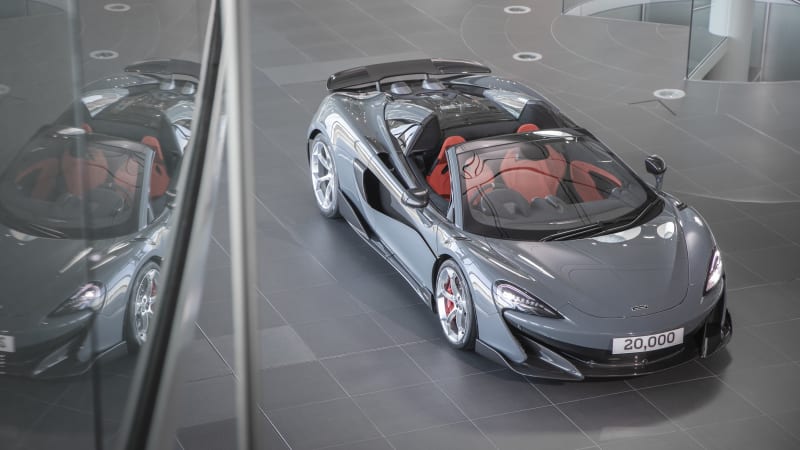 This doesn't seem to bother McLaren much, as it says it plans to keep output at approximately 5,000 cars per year into the next decade. A small increase to 6,000 cars per year is expected as the company executes its "Track25" plan to introduce more models.

Every one of the McLarens built since 2011 has been assembled at the company's production center in Woking, Surrey. McLaren credits part of the sharp increase in production to the addition of a second shift at the manufacturing center, implemented in 2016. We completely expect McLaren to remain lower-volume than Ferrari and Lamborghini in the coming years, especially as those two companies venture into the world of SUVs. The Urus is already out, and Ferrari's performance crossover will likely add even more volume. McLaren has repeatedly said it has no intention of getting into the SUV market.