The history of the Toyota Supra, as told by Toyota

As part of the various spec packs, features lists and releases we received when attending the 2020 Toyota GR Supra press launch, Toyota included a rather in-depth history of the Supra, from the first A40 generation through the legendary, most recent A80. We thought it was pretty interesting, and rather than rewriting and regurgitating the fine work of someone within Toyota's press office, we decided to share an abridged version of it below. So this would be the history of the Toyota Supra as told by Toyota itself, more an autobiography, really, but it's worth a read. Enjoy. 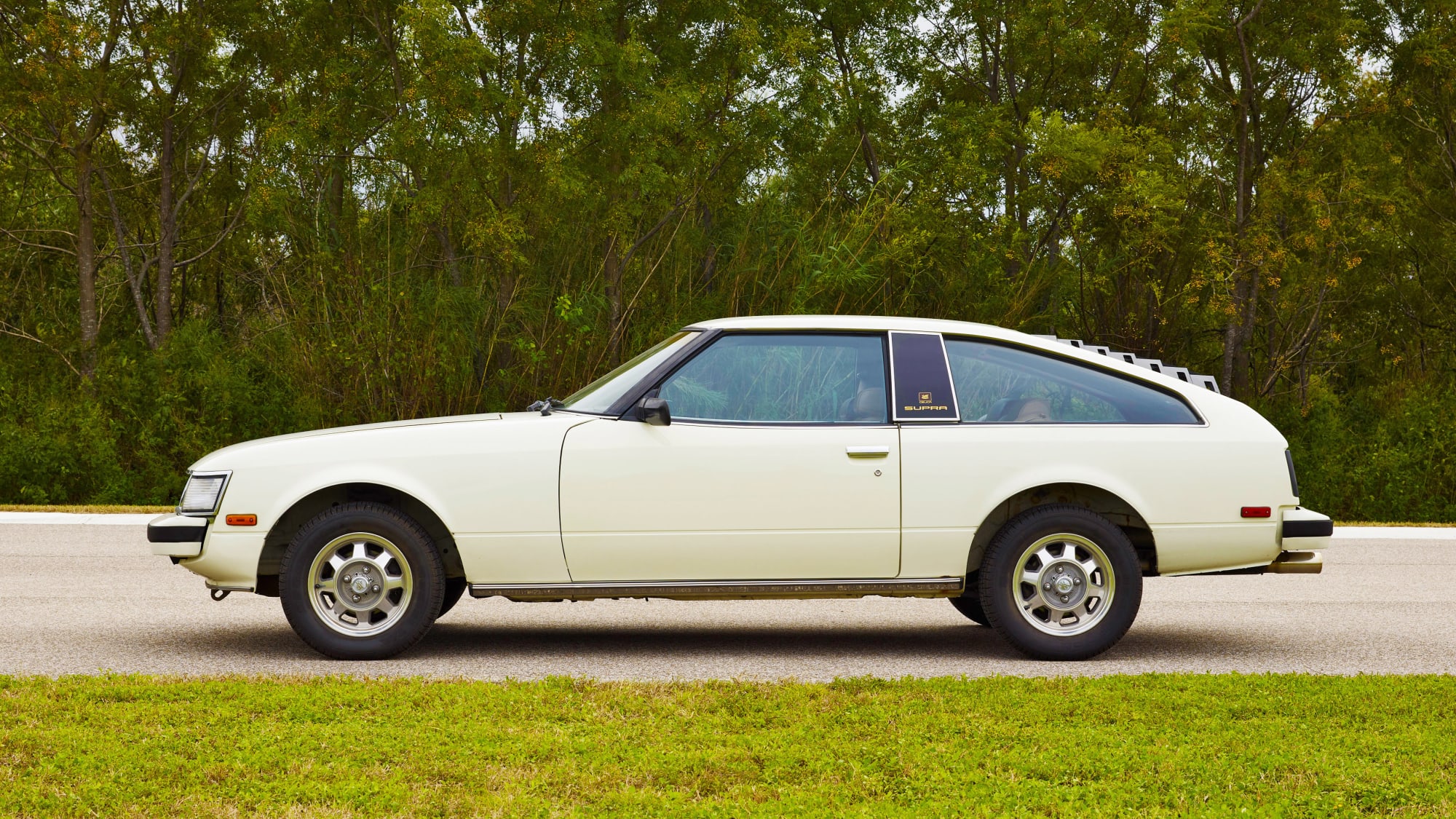 The second-gen Celica, designed by Toyota's Calty Research Design studio in California, continued the momentum (of the first Celica compact sport coupe introduced for 1971). Its responsive four-cylinder engine struck an admirable balance between performance and efficiency, though Toyota saw more potential. For 1979, a longer-wheelbase version of the Liftback model with a 110-horsepower, 2.6-liter inline-six joined the line: the Celica Supra. 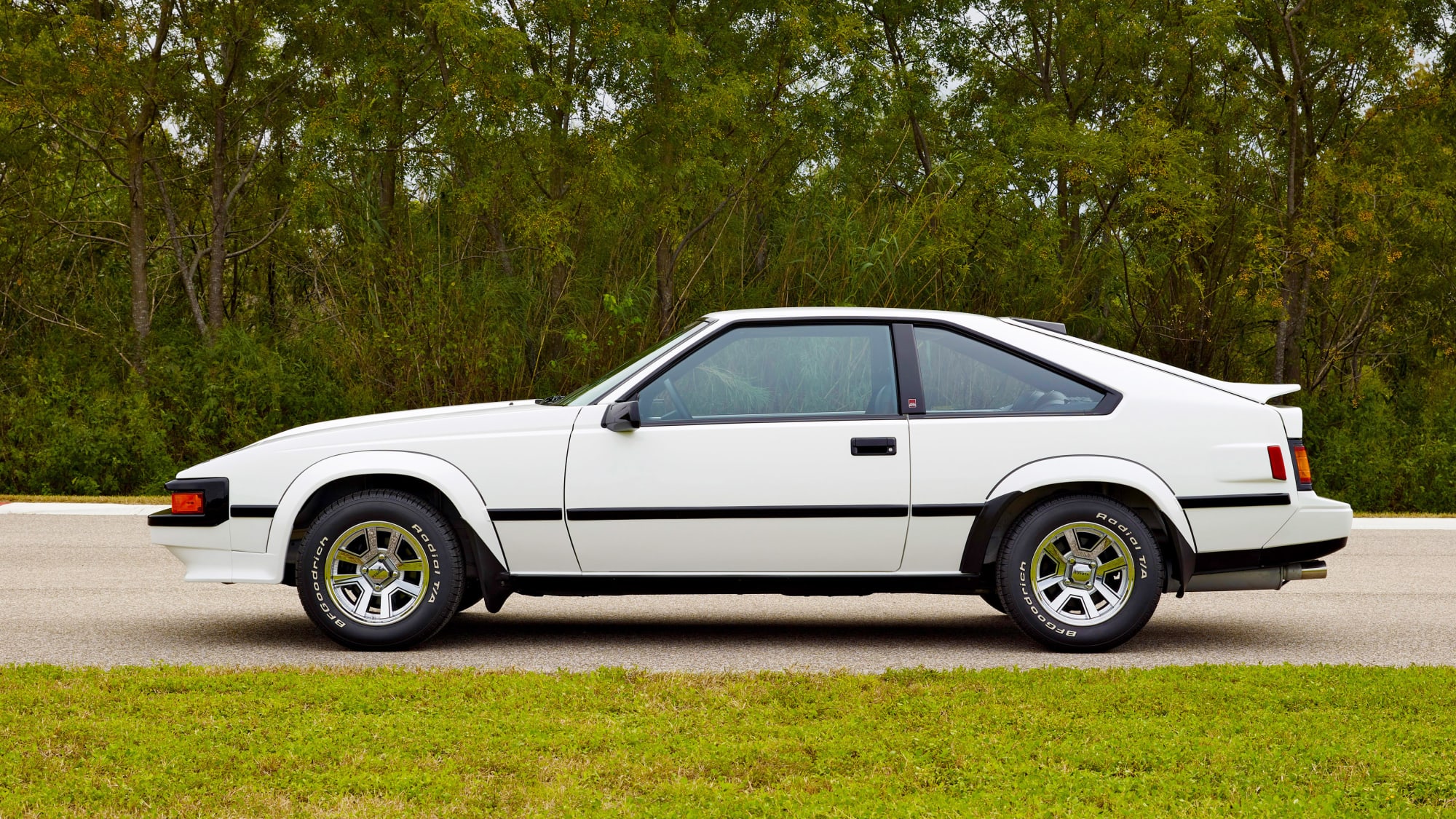 For its second generation in 1982, the Supra took a hard turn toward sporting GT. Based on the taut, angular Celica body that was also new that year, the longer-wheelbase "A60" Supra version carved out its own identity with an exclusive front-end design featuring pop-up headlights.

On a new "P" (Performance) model, exclusive wider wheels and tires and muscular flared fenders accentuated the Supra's knife-edge profile. A unique sunshade over the black-framed glass liftback suggested a spoiler and became a signature design feature. The Supra P was priced at $14,598 for 1982, while the subtler "L" model (Luxury) was $1,000 less.

Under the hood, both used the 5M-GE DOHC 2.8-liter inline-six with 145 horsepower, which was on par with some domestic V8-powered sport coupes of the day. Transmission choices included a crisp-shifting five-speed manual or a four-speed automatic.

Further signaling Supra's evolution away from its Celica base, the second-gen model debuted independent rear suspension not shared with its four-cylinder cousin. Chassis tuning by Lotus, not surprisingly, made the Supra a wonderful handler. Car & Driver magazine, which put the Supra on its "10 Best" list for 1983 and 1984, judged the sporty Toyota's handling superior to two Porsche models, a Ferrari and a Lotus Esprit in a test to find the best-handling imported car.

The second-gen Supra helped define the accessible luxury/performance GT with such standard features as power windows, power door locks, power mirrors, automatic climate control and cruise control. A sunroof and two-tone exterior paint scheme were among the options. The Supra L featured electronic instrumentation, while the P model's more sport-focused cockpit had traditional gauges and eight-way adjustable bolstered sport seats with inflatable lumbar support. The graphic equalizer for the cassette stereo was ideal for fine-tuning the sounds of The Cars, Def Leppard and Pat Benatar.

The Supra's balanced performance wasn't the only reason that advertising for the car featured legendary racer Dan Gurney proclaiming it had "the right stuff." Toyota Racing Development, founded in 1979, had partnered with Gurney's AAR team to compete in IMSA's GTU (under 2.5-liter) class with the Celica, and by 1985, had achieved 10 victories. They next entered the IMSA GTO class (over 2.5 liters) with a specially built, tube-frame Celica racecar, and won the 1987 championship. In the early 1990s, Toyota sponsored Gurney's AAR Eagle Mk. III car in IMSA's GTP (prototype) class, winning 21 out of the 27 races entered, and taking the 1993 championship. Toyota's racing pedigree would continue to influence Supra development. 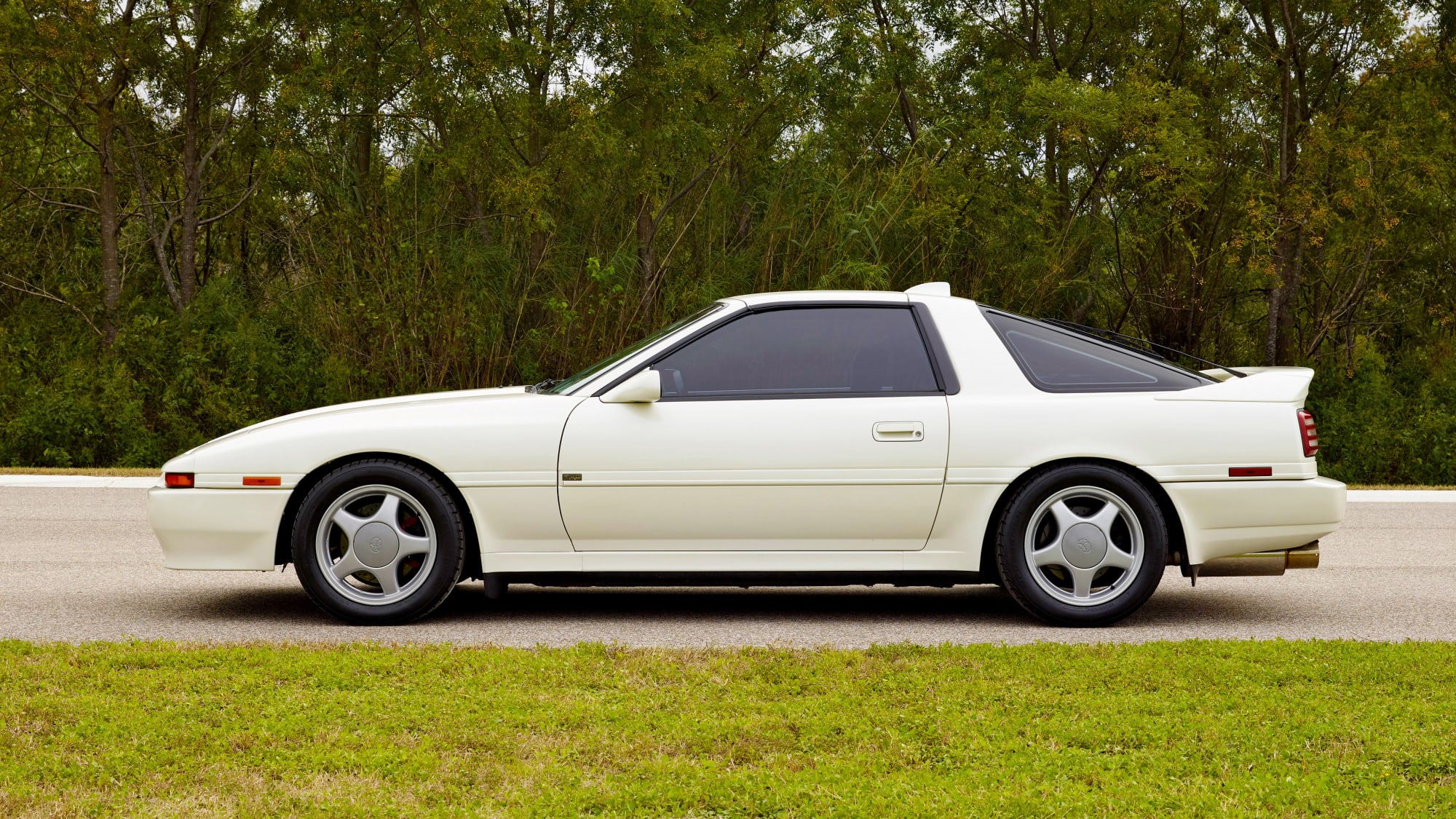 While second-gen Supra was becoming its own car in customers' eyes, separation from the Celica was well underway. In 1986, the two models would part ways, sharing only their Toyota badges.

The Celica moved to a front-drive platform and offered compelling four-cylinder performance variants. The Supra that arrived in mid-1986 remained rear-wheel drive on a new platform, built to compete against a wider variety of international sports/GT models.

The third-gen Supra design blended angular lines with softer edges in both coupe and new Sport Roof body styles, the latter with a lift-off roof panel to create a semi-convertible. The feature was not new to Toyota; its tiny 800 Sports model had one in 1964, before the Porsche 911 Targa made it more famous.
The luxurious A70 Supra brought more. The new DOHC 7M-GE 3.0-liter inline-six, with the first four-valve-per-cylinder configuration for a Supra, produced 200 horsepower and 196 lb.-ft. of torque. Five-speed manual or four-speed automatic transmissions were again available.

The Supra's new chassis, with double-wishbone front and rear suspension, delivered world-class ride and handling, and this was the first Supra to offer ABS brakes. That was just for starters. Arriving a bit later, the first Supra Turbo used the new 7M-GTE turbocharged/intercooled version of the six good for 230 hp and 246 lb-ft of torque. With the standard five-speed manual transmission, the Supra Turbo could hit 60 mph from rest in about six seconds.

The Supra Turbo was much more than an engine upgrade. A standard Sport Package (optional for the naturally aspirated model) bundled a limited-slip differential and the Toyota Electronically Modulated Suspension (TEMS). The system electronically adjusted the gas-filled shock absorbers automatically to soft, medium and firm settings in response to road conditions, steering angle, vehicle speed and braking. The driver could choose between "Normal" or "Sport" modes, each following different programs to cycle through the three settings. 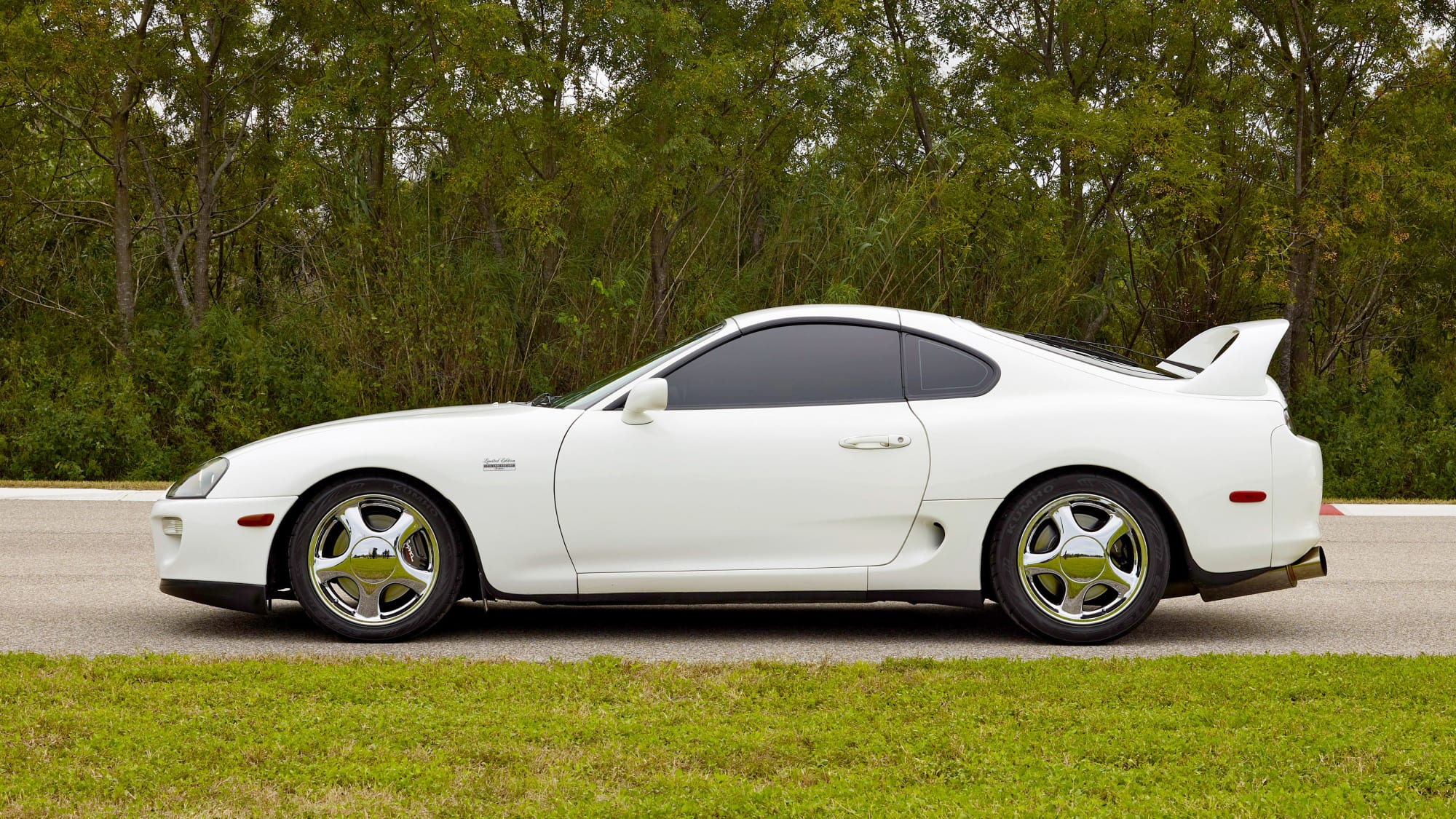 Toyota had decided the fourth-generation Supra should, like the 2000GT a quarter-century before, make a bolder statement for design and performance. Blending supercar performance, polished refinement and Toyota quality, the Supra stood apart in what was undoubtedly a renaissance period for Japanese sports cars. Its design echoed the 2000GT's classic proportions without being "retro."

The fourth-gen Supra, offered in coupe and Sport Roof body styles, was based on a shorter version of the platform that also underpinned the Lexus SC coupe. Car & Driver called the robust foundation "as flex-free as a granite tombstone."

To achieve lofty performance goals set for the A80 Supra, Toyota focused on both weight reduction and increased power. At 3,450 pounds, the Turbo model weighed about 125 less than its predecessor, some of the savings coming from an aluminum hood, roof and bumper supports — and even hollow-fiber carpeting.

The all-new 2JZ inline-six engine, however, used an iron cylinder block rather than aluminum for the strength to handle a substantial increase in power over the previous Turbo model. In naturally aspirated form, it produced 220 hp and offered the choice of a five-speed manual or four-speed automatic transmission.

The Turbo version, the 2JZ-GTE, employed two sequential turbochargers and produced 320 hp and 315 lb-ft of torque. The manual transmission was a six-speed, and the optional four-speed automatic had a manual mode. (The six-speed had a one-year hiatus for 1996.)

The Supra Turbo left no reviewer unimpressed, doing 0-60 in 4.6 seconds and the quarter-mile in 13.5 seconds at 106 mph, according to Car & Driver. Other outlets recorded similar performance. For perspective, the Supra Turbo was slightly quicker than that year's Porsche 928 GTS, which cost double the Toyota's $39,900 price. The Supra Turbo's top track speed was electronically limited to 155 mph, but it was known that without the limiter, 180 was possible.

Handling and braking were no less impressive. Said Road & Track: "Like the Supra Turbo's acceleration, its handling and braking prowess are close to the best we've ever seen, regardless of cost."
The Turbo's tall, hoop-style rear wing, which became a signature feature, was functional, adding downforce to enhance high-speed stability. The wing's look was a matter of personal taste, though, which is why Toyota did not make it standard. The cockpit was more driver-focused than in previous Supras, and the front seats were praised for comfort.

The fourth-gen Supra remained a low-volume car, with just over 11,200 sold in the United States before its withdrawal from this market in 1998. Nearly 7,000 of those were Turbos.