Ares Design turns the Ferrari GTC4Lusso into a 412 revival

Carbon fiber restomod improves on both GTC4Lusso and the original 412

Ares Design has a second project on the go for this year, after its beautiful Ares Design Coupe for the Bentley Mulsanne. The Modena, Italy, coachbuilder released renderings of its Project Pony — Ares gives "Project" codenames to cars in development — that turns a Ferrari GTC4Lusso into a modern 412. The conversion is the next in the firm's Reborn Legends group, coming after the reimagined Ferrari 250 GTO based on the 812 Superfast. This particular writer is ambivalent about the GTC4Lusso and a huge fan of the 412, so I think Project Pony an outstanding way to turn a shrug into "Buy with One-Click."

For those unfamiliar, the 412 was a passionately unloved four-seat Ferrari from the 1980s, the last in a series of front-engined V12 grand tourers that began with the 1972 365 GT4 2+2. Named for the displacement of a single cylinder, the engines got larger and more advanced, through to the 412 that ended production in 1989. The 1985 model introduced the brand's first automatic transmission, a General Motors unit just as derided as the rest of the car, but which sold better than the manual. This was the era when Tom Selleck's Magnum P.I. made the 308 a must-have poster, when Don Johnson's Testarossa made every boy question the payroll policies of the Miami Police Department, when the 288 GTO showed what a car would look like if it were half "The Godfather" and half Sophia Loren, and the F40 generated gravitational waves. The 412, meanwhile, lived in a damp hut on marsala dregs and stale polenta.

Ares Design retained the GTC4Lusso's side vents but without the strakes, the door handle, and taillight arrangement. Every other exterior line got redrawn. New carbon fiber body panels include pop-up headlights in front and transverse vents on the hood. The bread-van profile gives way to a sharply raked C-pillar that falls into a gently sloped trunk just long enough to balance the front end. The rear diffuser shoots up to mimic the original coupe. Chrome frames the side glass and B-pillar for an authentic '80s look, with the retro 412 wheels the finishing touch.

The reupholstered 2+2 interior replaces the rounded forms on the instrument panel with squared-off angles, down to the square vents instead of the original round units. There's a round steering wheel, too, as opposed to the flat-bottomed GTC4Lusso wheel.

The powertrain holds steady, meaning classic looks powered by a 6.3-liter V12 with 680 horsepower and 514 pound-feet of torque, working through a seven-speed dual-clutch and 4RM all-wheel drive to all four wheels. The price is said to start at 700,000 euros, or a little more than $800,000, which we'll assume includes the price of the GTC4 Lusso. 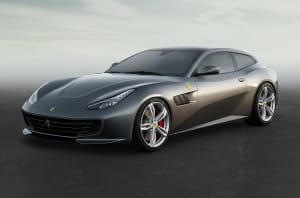