2019 Toyota Corolla vs. compact hatchbacks: How they compare

James Riswick
So you've read what we thought about the 2019 Toyota Corolla Hatchback. Oh, you didn't? Well, click to your left, we'll still be here. Just made some coffee, we're good for a while.

Welcome back! Wasn't that riveting? The blue paint sure is bright, eh? Well, now you must be wondering how that new 2019 Corolla stacks up with all the other hatchbacks. And, despite long thinking that hatchbacks were doomed, there are actually quite a lot of them these days. So many, in fact, that we couldn't fit them all in our space-limited comparison chart. So, with apologies to the Hyundai Elantra GT, Kia Forte and the dead-man-walking Ford Focus, these were the cars we chose based on sales and competitiveness: the Honda Civic Hatchback, Mazda3 5-Door, Volkswagen Golf, Chevrolet Cruze and Subaru Impreza. We also included the outgoing Corolla iM for reference. If you think we've left something of interest out, you can always create your own comparison. 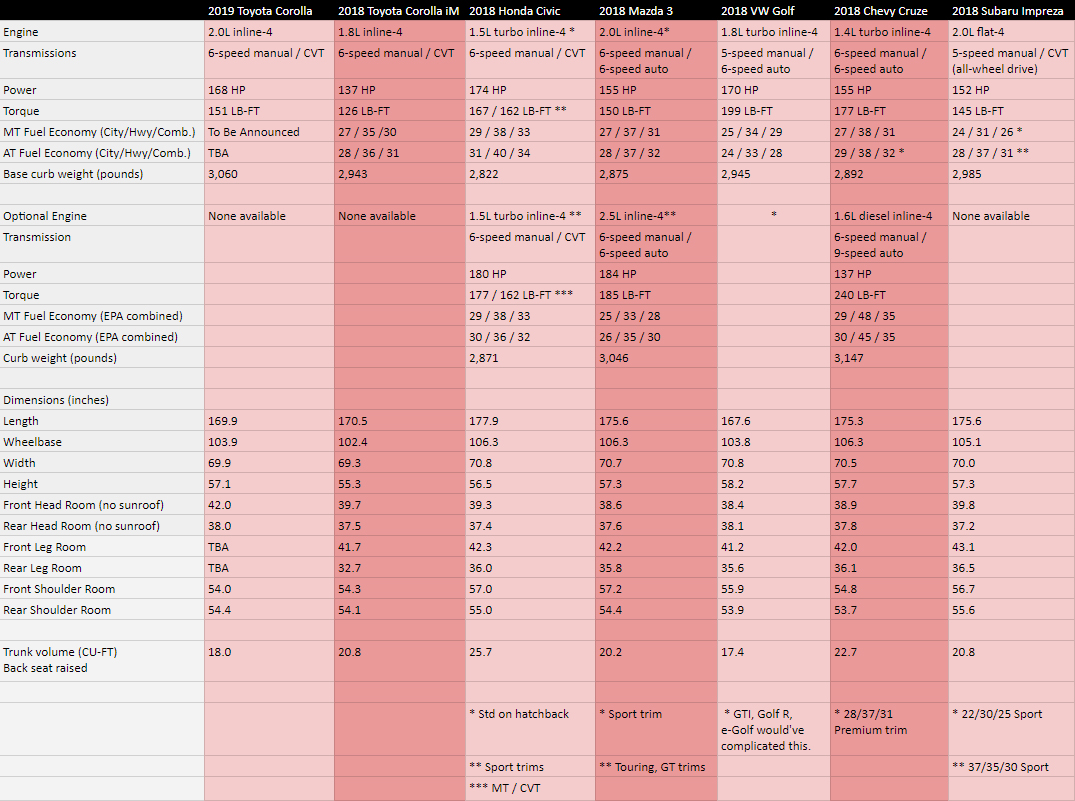 There is but one king here, and its name is Civic. While the sedan and coupe come with a naturally aspirated 2.0-liter 158-horsepower four-cylinder that's less potent than the Corolla's, the hatchback comes standard with the 1.5-liter turbo that aces the segment in terms of both acceleration and fuel economy. The Golf's acceleration should be comparable, but as you can see, it trails on fuel economy (still not bad, though).

The new Corolla ends up being better than the rest with its new 168-hp four-cylinder paired to novel transmissions: a six-speed manual with rev-matched downshifting (!) and a CVT that mimics the actions of a 10-speed automatic. The Corolla does weigh more than everything else, though, so that could hamper its acceleration. Fuel economy data also wasn't announced, but Toyota indicated it would be a bit better than the old Corolla iM. Something akin to the 2.0-liter Mazda 3's numbers seems likely.

As for the Mazda, its top two trim levels actually come standard with its bigger engine. In any event, despite its ample power, testing has often showed that the Civic is still the quicker car from 0 to 60 mph.

And finally, let's not leave out the two on the end. The Subaru is the only car in the segment that offers all-wheel drive (the Focus RS and Golf R don't count), but is also the segment weakling now that the Corolla iM has been discontinued. The Chevy Cruze may have a middle-of-the-pack 155 hp, but its turbocharged 177 pound-feet of torque should make it feel plenty potent around town. It's also the only car here to offer an eco engine option: a diesel paired to either a six-speed manual or a nine-speed automatic. (By the way, we have no idea how the auto manages to get worse fuel economy on the highway despite having three extra gears).

Finally, there are sportier versions of the Civic and Golf available. However, including the Civic Type R, Golf GTI and Golf R in here would make things confusing.

We've done enough typing for now. Take a look for yourself! The only dimensions Toyota omitted from the 2019 Corolla press materials were front and rear legroom. If we were conspiracy theorists, we might surmise that despite an increase in wheelbase and legroom compared to the Corolla iM, the new Corolla still has less than its competitors and therefore didn't want to highlight that fact. If we were conspiracy theorists, which we aren't. We can at least say the new Corolla Hatchback's wheelbase is less than all but the Golf's and that at the first drive, the back seat didn't exactly seem capacious. It wasn't overtly cramped, either, and without these competitors there in person, we can't fairly comment about real-world differences.

On the other hand, Corolla headroom is fabulous, so bring along your fancy hat, ladies! On the other other hand, cargo space is not. You can see that in the trunk volume number, and in person, the high floor and distinct lack of space above the back seat line results in an area that's not especially versatile. It should be easier to transport bulkier items in the Mazda, Impreza and even Golf. The latter may have even less space on paper than the Corolla, but we're guessing that has to do with less cargo area length (note the Golf's shorter overall length) and that its squared-off roofline would result in a more versatile hatchback. As for the Honda, it's important to note that it's a different sort of hatchback, more akin to a Prius or Audi "Sportback" in terms of its design. It too isn't that tall, but its considerable length does make a difference. After driving the 2019 Corolla, we can say that it is a far more competitive vehicle than the old Corolla iM or still-existing Corolla sedan. Besides its now-competitive power, its handling is sharper without abandoning ride quality, its manual and CVT transmissions are compelling, its interior quality is excellent, and its new tech interface is easy to use. While we can't say where it may land if we were to subjectively rank these six cars (not counting the iM), we can at least posit that it would make a strong case for itself.