Independent studies confirm that Lotus Elise drivers are 221.6 times more likely to spontaneously dispose of light-colored undergarments after driving on curvy roads. That's because the weight distribution of a mid-engine car encourages novice drivers to inadvertently ask the rear wheels to pass the fronts in the middle of a corner. Adding insult to staining, the layout's resulting low polar moment of inertia ensures that this rotation happens more quickly than the average person's sphincter-startle clench reflex.

The flip side is that even the most powerful mid-engine cars have enough weight over their rear wheels to make straight-line acceleration a worry-free affair.

Well, they used to. Full-throttle acceleration in the Ferrari 488 Pista is genuinely terrifying. Wheelspin is a genuine threat at any road-legal speed — and when that happens, its rear end steps out with the same violence as the car accelerates. And that is saying something.

The 488 Pista is diabolically quick. Like, hallelujah-hold-on-tight, praise-the-lord, scream-like-a-child and slap-yo-momma quick. Or, in slightly more objective terms, the Ferrari's claimed 7.6-second sprint from a standstill to 200 km/h (124 mph) is but 0.3 second behind that of the 1,000-hp Bugatti Veyron 16.4. When we say quick, we mean QUICK.

Perhaps too quick for the road, so it's a good thing the car is literally named after the track. The Pista is the latest in the lineage of harder-core Ferraris that began with the 360 Challenge Stradale. The 360CS, like the F430 Scuderia ("Team") and 458 Speciale ("Special") that followed, was a little quicker than the regular car, a little more devoid of creature comforts and a lot louder. The same basic recipe applies to the 488, though in its transition from GTB to Pista (say "peas-ta"), its engine gets a bigger power boost than any of its predecessors. Boasting 720 metric horsepower, or 710 American ponies, the Pista makes 49 hp more than the already absurdly powerful 488 GTB. 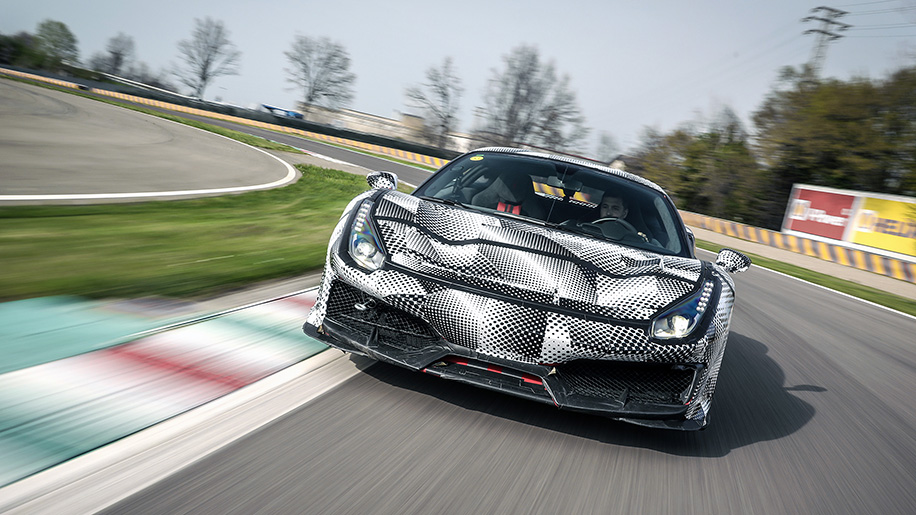 But more on that later — the star of this prototype preview drive was the engine, Ferrari's award-winning 3.9-liter flat-plane-crankshaft V8. Ferrari claims that half of the engine's functional parts are new compared with the F154CB engine in the 488 GTB — enough to merit it a new code. Say hello to the F154CD.

The revised engine weighs 40 pounds less, and Ferrari claims that it has 17 percent less rotating inertia thanks in part to a lighter flywheel and crankshaft, titanium Pankl connecting rods and hollow intake valves. The engine breathes cooler air thanks to intakes that have been relocated onto the rear deck, out of the path of the hot air coming from the front-mounted radiators. 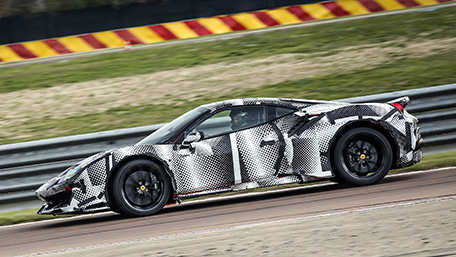 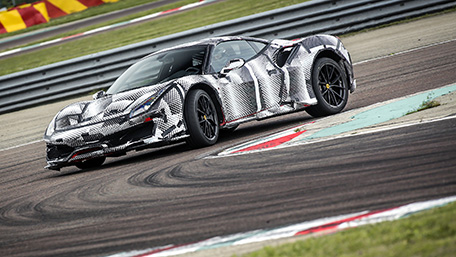 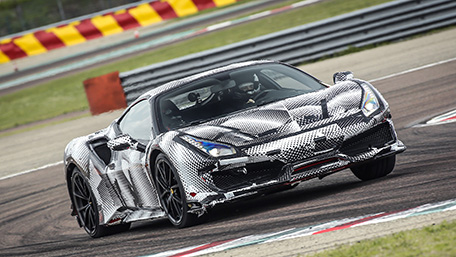 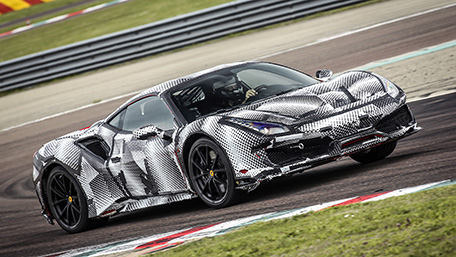 Those are pretty granular facts, but they're important because of what we haven't discussed — there's been no mention of an ECU reflash or bigger turbos to create additional power. That's because, where turbocharged engines are concerned, there's a right way and a wrong way to make more power — and Bigger Turbos, Moar Boost is the wrong way.

Indeed, an exceedingly high level of turbocharger control is what defines the F154 engine — it's allowed to make full torque only when the transmission is in seventh gear. Peak boost is up marginally, from 20.3 to 21.8 psi, and the turbocharger housings are new, but only so that Ferrari could install turbine speed sensors. Knowing the exact speed of each turbo, rather than inferring it from boost pressure, allows the Pista's computers to better control output, to sync the output from each bank of cylinders and to let the turbos run to within 1,000 rpm of their 160,000-rpm maximum speed. The margin of error in the GTB's estimation model required a 5,000-to-6,000-rpm buffer.

In the first six gears, the computers deploy four reduced-boost strategies (first through third, fourth, fifth and sixth gears) with increasing midrange output — but each mode is designed to help the engine feel like a naturally aspirated engine with a 6,750-rpm torque peak.

It works — this is a turbocharged engine that rewards revs. The engine's stupendous output and willingness to pull right to the limiter, combined with the seven-speed dual-clutch transmission's short, incredibly closely spaced gear ratios makes for a blistering full-throttle experience where each gear seems to last only a fraction of a second before it's time for an upshift. Since the engine's 710-hp maximum output occurs in a plateau from 6,750 to 8,000 rpm, full power is once again available after each shift. Acceleration is relentless and otherworldly. 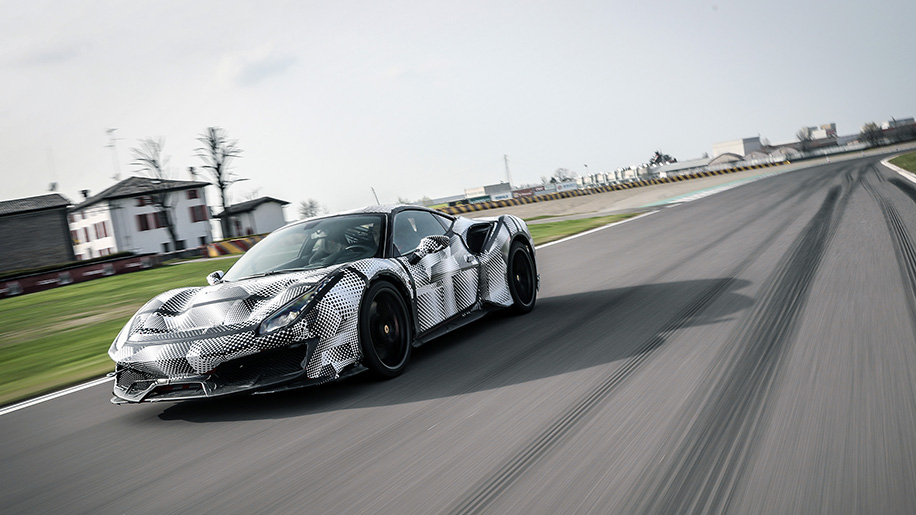 By comparison, the prodigious cornering grip seems entirely of this world. At its limit, the Pista exhibits just enough understeer to impart a sense of stability, but the smallest twitch of your right foot is enough to overwhelm the rear and summon the aid of stability control.

The latest version of Ferrari's Side Slip Control is pure dynamic sorcery, programmed with the singular mission of adding speed. In its more aggressive modes, it allows significant tail-out antics without letting you spin and prevents the car from exploding sideways in response to the transmission's positively brutal full-throttle upshifts, providing a significant safety net with no penalty whatsoever. This is the kind of stability control that you won't ever want to turn off.

Especially when you experience just how quickly 710 hp can overwhelm the this car's rear tires. The Pista encourages intimate relations with the oft-ignored area of the accelerator pedal that's located between "off" and "on." Ferrari deserves praise for having the courage to limit the engine's torque in lower gears; any driver of this Ferrari will have no choice but to exercise additional restraint.

Then, the 488 Pista proves to be far more docile and tractable than any of its predecessors. Driven around town, the Pista's ride is surprisingly unbrutal, the transmission executes smooth shifts and the engine will lug along happily at just over idle. It takes but one errant stab at the throttle to remind you, however, that Ferrari has flipped the rules of the mid-engine sports car. The corners? Those you can deal with. But when the road turns straight, you'd better clench tight before hitting that pedal.