The V8 Vantage gets harder-edged without losing its charm Aston Martin's 21st century renaissance kickstarted with the DB11, a high-dollar grand tourer that upped the outgoing DB9's dynamic envelope while keeping one foot firmly planted in the brand's aesthetically elevated roots. The sequel to Aston's bid for relevancy is the V8 Vantage, a more agile and track-focused two-seater, perennially the company's best-seller that guns for the heavyweight in the segment, the Porsche 911. With a completely updated design language and laser-like focus on performance, the 2019 Aston Martin V8 Vantage is arguably the most important modern car to come out of Gaydon in... well, forever.

Forget everything you know about the late, great V8 Vantage (and its sublime V12 counterpart). The 2019 model is a completely re-imagined beast, built from the ground up with around a turbocharged engine from an unexpected source. The old Vantage V8's naturally aspirated V8 is gone, and in its place is a Mercedes-AMG-sourced twin-turbo 4-liter V8 producing 503 horsepower and 505 lb-ft of torque (up from the old 4.7-liter mills' 430 hp and 361 lb-ft). The new donor powerplant receives a re-tuned intake and exhaust to give off a slightly different aural impression that's slightly raspier than the thumpy AMG. Unlike its AMG counterpart, the Aston version adopts a wet-sump oiling system, with the benefits of sitting lower to the ground and improved fuel economy due to the system's slightly reduced parasitic losses. Senior Vehicle Engineering Manager Craig Jamieson says that his team's learnings developing the wet sump system in the V12 Vantage enabled them to fine tune this setup for track duty. 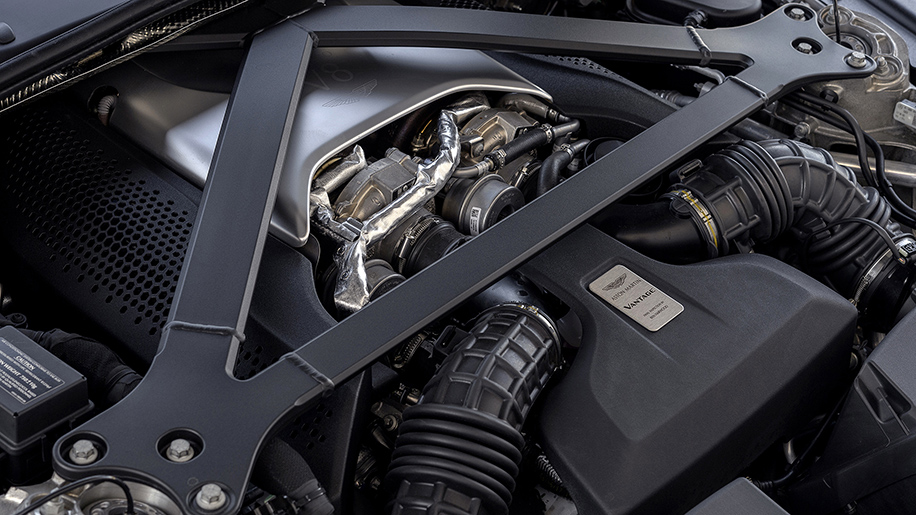 The engine mates to the ubiquitous ZF 8-speed automatic gearbox, which comes equipped here with stationary paddle shifters. Power is routed through Aston's first use of an electronic differential at the rear transaxle, which helps achieve a balanced 50/50 weight distribution. Seventy percent of the bonded aluminum chassis, which is derived from the DB11's, is unique to Vantage. Its dry curb weight is 3,373 pounds (a more standard wet curb weight wasn't available at press time), and it'll sprint to 60 mph in a claimed 3.5 seconds on its way to a top speed of 195 mph.

Though much of the Vantage's design direction comes from the obvious decision to depart from the brand's bygone era, a few choices were informed by function – most controversially, those squinty LED headlamps which some detractors have slammed as being "Mazda-like". Aston says that in addition to the reduced frontal surface area that cuts aerodynamic drag, the beady lamps utilize a smaller housing that enables the big 20" wheels clad in 255/40 rubber to more closely hug the wheel well. Encounter a Vantage in the wild and you'll notice that while its titanium grille retains Aston's familiar shape, there are plenty of new unexpected elements throughout: a functional side gill, more aggressive side sills and rear diffuser, and a dramatic tail. "Elegant," that hackneyed term so typically associated with the Aston Martin brand, might not be the first word to come to mind after laying eyes on the Vantage. But in this case, it's arguably more fitting that the Vantage will inspire words like "striking," "provocative," and "controversial." 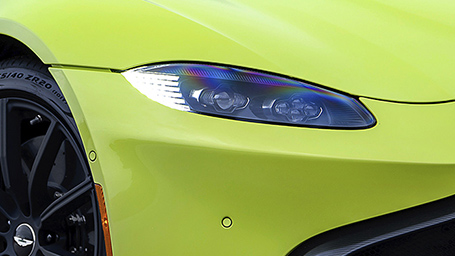 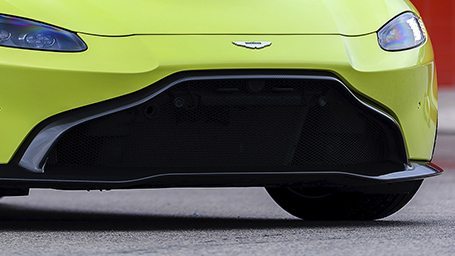 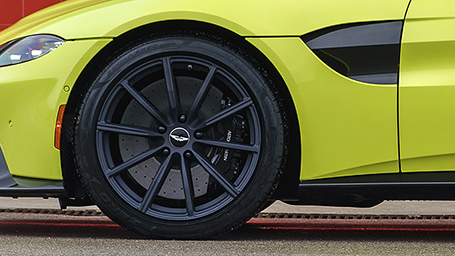 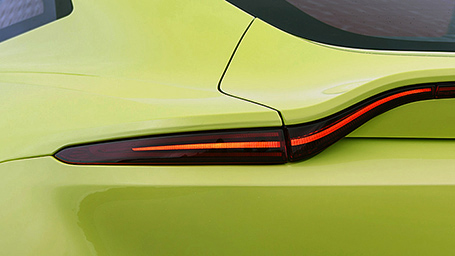 Climb inside and you're met with a more handsome, functionally focused interior than any Aston before it. Gone are the familiar circular "PRNDL" buttons laid out in a straight line, replaced by a chevron shape that feels less decorative and more functional. Though the 8-speed automatic is currently the only available gearbox, three-pedal fanboys will rejoice that there's a small space in center tunnel where CEO Andy Palmer promises a manual gearbox will reside as an option. Though not quite as precious as a DB11, the Vantage's cockpit still retains plenty of thoughtfully finished details, from top-stitched leather armrests and knee pads to assertively trimmed Alcantara and carbon fiber accents. The cockpit is buttoned-down and functional, as is the low-pitched thrum from the tailpipes when the powerplant is stirred via the centrally positioned engine start/stop button.

Even though a heavy downpour soaked the car's launch in Portugal, the Vantage's performance on rain-slicked roads and the Algarve International Circuit (aka, Portimão) revealed quite a bit about the newest Aston's performance envelope. For starters, the V8's torque feels fat and copious, a sensation which becomes amplified in wet conditions. I used the Sport Plus mode (between Sport and Track) during my first session at the Algarve Circuit, and when the rear wheels broke traction, they did so with a slide followed by a (sometimes) violent catch. Keeping Sport Plus mode but switching to ESC's less restrictive track mode makes for a far less harrowing, and more informative track experience. The electric steering provides good feedback – not quite as communicative as the 911 Carrera GTS, one of the Vantage's benchmarks, but still quite good. 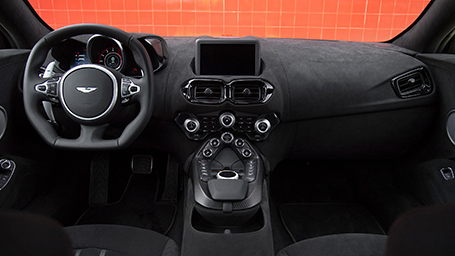 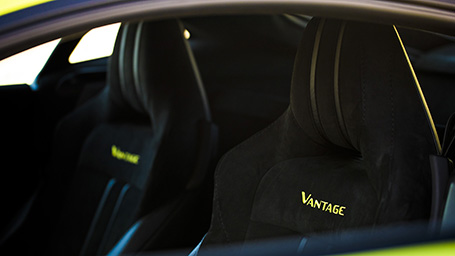 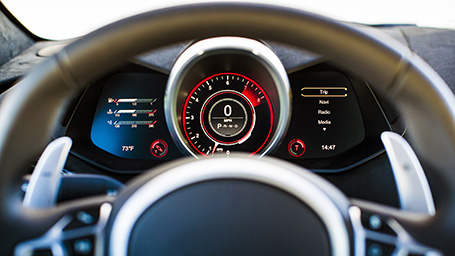 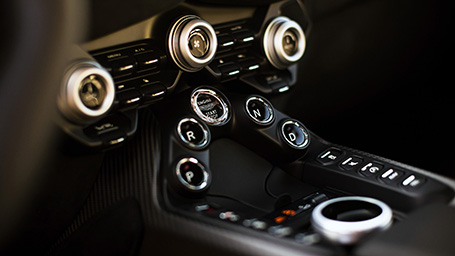 A pause in precipitation enabled higher speeds at the track, revealing what appears to be a very solid chassis beneath the muscular sheetmetal. Though it's possible to encounter some understeer in slow corners with too much steering input (no surprise there), the Vantage feels predominantly balanced, agile, and responsive. There's plenty of grunt throughout the rev band, which plateaus in torque between 2,000 to 5,000 rpm, peaks in horsepower at 6,000 rpm, and revs past the digitally indicated 7,000 rpm mark. Speaking of digital, the TFT display here seems a better philosophical fit than it does in the DB11, a car that seems to be better suited to old world touches like mechanical gauges.

After a few laps, I was regularly touching the 150 mph mark on the track's straight, which dips at the end just before a sharp right-hander. Slowing down from those triple digit speeds in the wet is a true test of any car's brakes, and the Vantage's carbon fiber stoppers feel up to the task by delivering strong, repeated stops. There's a bit of perceptible brake boost effect during the most strenuous decelerations, in which the pedal perceptibly dips and offers added assistance to the slowdown process. There was also a very slight feeling of fade towards the end of my more aggressive sessions, but considering Algarve's medium-to-high-speed setup and my repeated hammering of threshold braking, a bit of fade wasn't surprising. 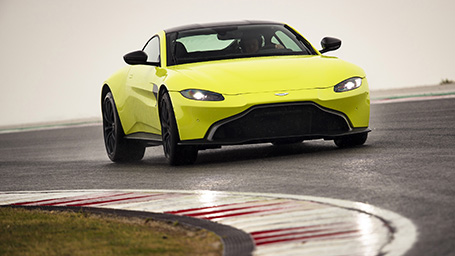 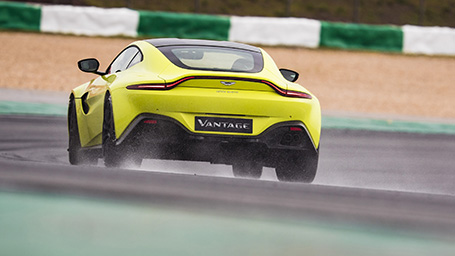 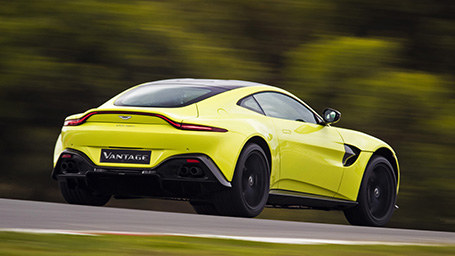 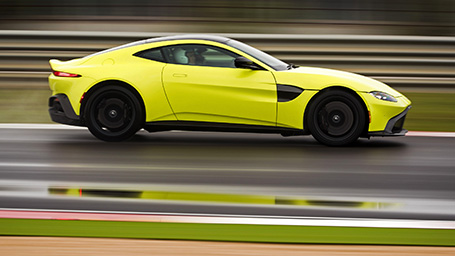 Off the track and on public roads, the Vantage seems to move away from many of Aston's GT-biased characteristics, showing itself to be more clearly focused on its sportier intention. Switch the three-mode active damping system into Sport (which is actually the least aggressive mode – see what they did there?), and there's enough compliance to make an all-day ride tolerable. There's just enough bump absorption to take the edge off the otherwise sharp ride. The Vantage's seats sit nearly half an inch lower than before which offers a better seat-of-the-pants feeling for what the suspension and chassis are up to, as well – another divergence from the careful remove of traditional grand tourers.

In final analysis, Aston Martin's newest Vantage marks a significant milestone in the brand's 105-year history, expanding into a level of performance, responsiveness, and driver feedback that could threaten some of the world's most rewarding sports cars. Though rain prevented us from pushing the Vantage to the edges of its limits, even under those conditions the new car showed a dramatic leap from its predecessor in terms of performance envelope, driver feedback, and agility. The AMG-sourced engine is a significant addition that raises the bar considerably, and the reworked design and ergonomics elevate the driving experience from that of a spirited grand tourer to a more intense, involving sports car. We can't wait to get more seat time in dry conditions to see how its athleticism rates against competitors like the Porsche 911 and the new Bentley Continental GT; until then, Aston Martin appears to have a winner on its hands, one that should (and likely, will) put its enemies on high alert.