From South Korea to North America, new Santa Fe has a lot to offer.

John Beltz Snyder
SEOUL, S. Korea — Say goodbye to the Hyundai Santa Fe Sport. For 2019, it becomes the Santa Fe — a two-row crossover that will continue to compete with the likes of the Nissan Rogue, Ford Edge and Toyota RAV4. Three-row versions coming later, which will go up against the Honda Pilot and Ford Explorer, will get an "XL" or some other, yet undisclosed moniker tacked onto the nameplate depending on the configuration. As such, it will have bigger shoes to fill in this increasingly competitive segment. The timing feels right for the crossover to come into its own, and Hyundai has done its best to make sure it pulls its weight against its rivals. 
With the updated name comes an updated look. In the flesh, it's a handsome ute that seems more SUV than CUV: beefed up and boxy, and less overtly elegant than so many swoopy crossover profiles we see today. Its big, chiseled face conveys a Lexus-like gravitas without looking too complicated or polarizing — check out the slight pinch where the "cascading" grille meets the front bumper. The rising beltline feels modern, while the mostly horizontal roof and almost vertical rear end feel anciently familiar; maybe a utility vehicle can sate our thirst for wagons after all.

Inside, the new Santa Fe has an air of quality to it, perhaps not in strict terms of materials, but in thoughtfulness. Hyundai does good things with affordable materials, and in general the interior is well laid out — specifically, the center console and its switchgear feel utilitarian and organized. We loved the smooth, tight feel of the leather wheel in our hand and the crispness of the digital display central to the instrument cluster. The seats are cozy, supportive without feeling cushy, and it was easy to find a natural seating position with little adjustment. Visibility is good, despite what you might think from looking at that high beltline from outside. There's a fixed piece of glass ahead of the side windows to improve sight lines at the bottom of the A-pillar. Checking the blind spot, the larger rear quarter window behind the second row of seating helps with visibility. 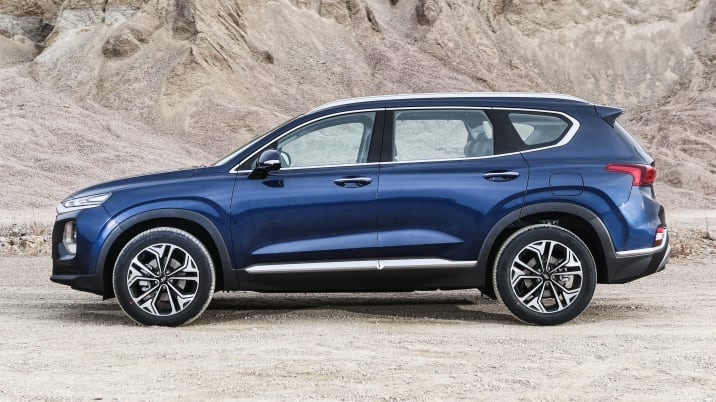 It was only after spending a couple of hours in the cabin that we noticed that there's a lot going on here. The headliner in our tester had a look somewhere between chambray and denim, but felt soft to the touch. The top of the dash was a softish dark plastic — a polyurethane leatherette, to be more specific. Below that, patterned metal trim surrounding the front occupants. There was some harder dark plastic. Then the speakers on the doors were jet black plastic formed into a type of wave pattern. On its own, each of these materials is attractive. But take a step back, and consider it all at once, and the new Santa Fe's approach is all a little much. Make sure you like the way your materials and patterns look together before you sign on the dotted line.

The 2.0-liter diesel mill in our Korean domestic tester felt like a really solid little engine, but it won't be part of the engine lineup we get in the States. We'll be offered a pair of gasoline engines: a 2.4-liter inline-four good for 185 horsepower and 178 pound-feet of torque, and a 2.0-liter turbo four providing 235 hp and 260 lb-ft. Come 2019, we'll get a 2.2-liter turbodiesel making 190 horsepower and an impressive 322 pound-feet of torque.

Despite offering different engines to the U.S. market, all markets will get a new eight-speed automatic transmission routing power to two or four wheels. In our diesel tester, the transmission did its job by staying out of the way. Shifts happen in the background; frankly, we basically forgot about it as we tooled around near the river border with North Korea. We'll be interested if the two extra gears offer any improvement to the already solid American engine offerings, particularly the turbocharged gas mill. 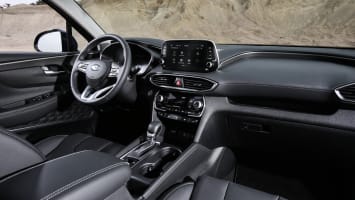 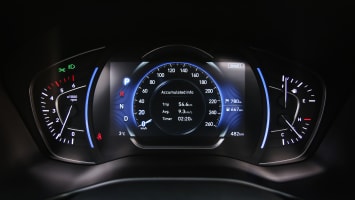 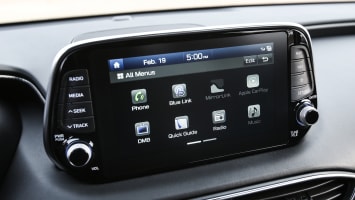 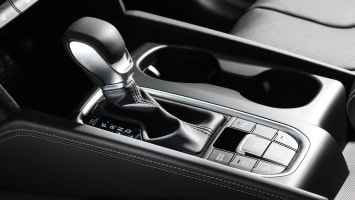 On Korea's smooth roads, the Santa Fe felt perfectly comfortable. We didn't notice much noise or movement, even on the downhill sections laden with Korea's version of speed reminders that seem like a hybrid of low speed bumps and rumble strips. It was quiet going down the road, but we'll reserve a final judgment on noise until we can test it at the higher cruising velocities allowed on U.S. highway.

The navigation and entertainment system's touch display was crystal clear and quick to respond to inputs. We didn't find ourselves getting lost in the menus (or on South Korea's highways) thanks to the pushbuttons surrounding the screen. The voice instructions were easy to follow, and the head-up display helped you count down the feet (well, meters in Korea) until your next turn. Interestingly enough, it let us know where all the traffic cameras were, a feature we'd hope to see in the U.S.

The Santa Fe's suite of driver assist systems, particularly the adaptive cruise control, works well. It follows at a comfortable distance, and showed us on the HUD the car in front of us relative to our distance setting, which really took the guesswork out of setting the gap. Lane keep assist helped nudge us toward the center of our lane, and would let us know if we were crossing over without a signal. You can turn the rear camera on for a view behind you while you're driving, which isn't always practical, but we're glad to have it available.

We only left the pavement for a brief diversion to visit an ancient fortification overlooking the ocean. The cratered dirt path took us up a steep hill to a view overlooking the beach, as well as a number of military outposts and, in the distance, North Korea. On the way back down, it was a bumpy ride, but the car managed just fine. Wouldn't want to take it off-roading, but we think it'd fare just fine on Michigan's crumbling springtime roads. 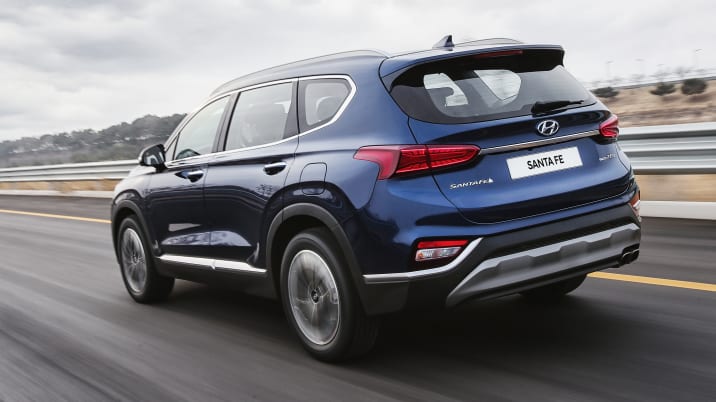 We didn't tackle many exciting corners, and definitely not at high speeds — apparently that's just something you don't do in Korea. (It's not something one really does in a crossover in general, but average Korean road speeds are considerably lower than ours.) Still, we found the Santa Fe to comfortably manage narrow curves with oncoming traffic in the opposite lane with confidence, even without the help of the lane minder. The Santa Fe's real test will be how it handles the rougher roads and higher speeds of America.

Our time with the new Santa Fe was brief, and it wasn't a U.S.-spec model, so we didn't get to dive deeply into some of the features American customers will enjoy. A couple of things we thought were interesting, though, are either new features, or a new take on ones we've seen before, and ones we're excited to experience in real world usage.

The first is the Safe Exit Assist system, which will be offered in the U.S. as well. This feature prevents the occupants from opening the door if the Santa Fe detects another vehicle approaching from the rear. This keeps the driver or passenger from getting a door ripped off or, worse, stepping in front of a delivery truck. The second feature is a Rear Occupant Alert, which is something we've seen pop up in a number of vehicles of late. In the Santa Fe, though, its uses an ultrasonic sensor in the headliner to detect motion in the back seats. If it senses a kid or pet left behind, it the car will honk the horn, flash its lights and even send the driver an alert on their smartphone if connected to Hyundai's Blue Link service.

From our initial testing, the 2019 Hyundai Santa Fe stands to be a compelling competitor when it arrives this summer. We're looking forward to spending more time with it so we can formulate opinions about the versions we could actually put in our own garage. Dropping "Sport" from the badging, Hyundai is giving the Santa Fe room to stand tall on its own merits as a core member of the lineup. Judging by our first introduction with the 2019 model, with its classy new looks, quality interior and smooth new transmission, it's worthy of the position. 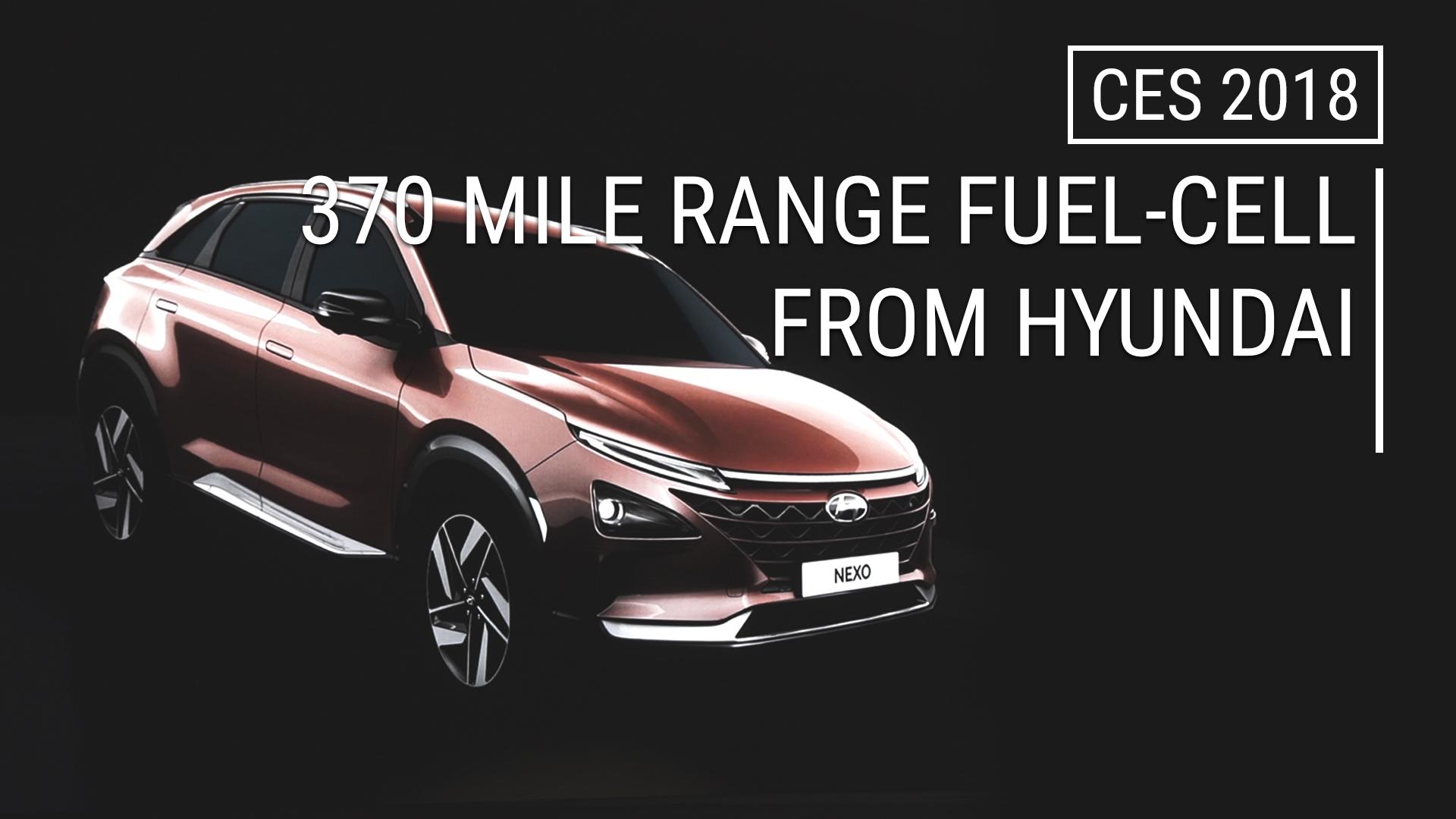