VALENCIA, SPAIN – I've got 226 angry horsepower rumbling between my legs, my kickstand is up and I'm ready to tackle Circuit Ricardo Tormo aboard the all-new Ducati Panigale V4, the most highly anticipated sportbike of the year. But I'm also a tad distracted by the sound emanating from the underslung exhaust. It doesn't sound like the brand's traditional V-twin configuration, because it isn't. The new Panigale is Ducati's first-ever V4-powered production motorcycle.

To put this in terms readers not intimately familiar with Ducati's history can relate to, the controversial move to a V4 is akin to Porsche's abandonment of air-cooled engines, or the electrification of hypercars. The 1,103-cc V4 shares a layout with Ducati's exotic MotoGP race bike. Unlike the more conventional 180-degree crankshaft found on V4-powered bikes such as the Aprilia RSV4, the Ducati employs a 70-degree crank pin offset and a twin-pulse firing pattern that makes it run like two back-to-back V-twins, firing with a 1-2 pulse along one bank, a brief pause, then another 3-4 pulse. Close your eyes, and it sounds bit like a Ducati V-twin, but with a slightly less irregular and staccato rhythm. The sound is deep, bold and familiar — related, but not exactly the same.

To be fair, there have been V4 Ducatis, but they weren't production models: the limited-production Desmosedici RR (which was essentially a road-legal spinoff of the 2007 season MotoGP bike) and the 1960s-era Apollo prototype (an ill-fated would-be Harley-killer, of which only two were built).

The powerplant's unique features, such as a counter-rotating crankshaft that reduces the gyroscopic effect of moving parts to help the bike corner while reducing the tendency to wheelie, are also derived from the company's MotoGP bikes. All in all, the new V4 produces 214 horsepower (or a stunning 226 hp with the optional Akrapovic race exhaust), and 91.5 lb-ft of torque at the crank. 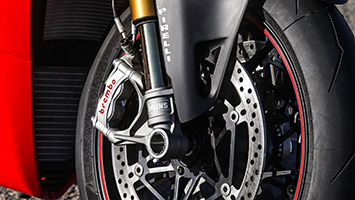 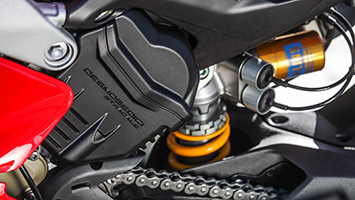 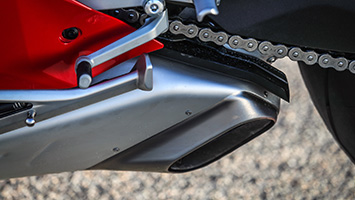 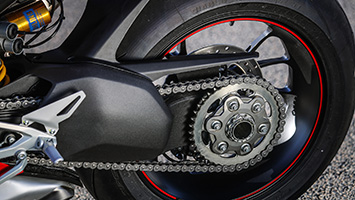 For some automotive perspective, that's nearly double the power-to-weight ratio of a La Ferrari, bringing this motorcycle's potency per pound closer to Formula 1 car territory than any street-legal four-wheeled vehicle. While it produces incrementally more power (+9 hp) and slightly less torque (-2.7 lb-ft) than the outgoing 1299 model, this one revs to 14,500 rpm in the first five gears and 15,000 rpm in sixth, spreading its torque more evenly across a broader rev range. The result is a bike that's easier to ride, and more crucially, easier to ride fast.

The Panigale feels slim and compact, with a 32.4-inch seat height that might feel a bit tall for shorter riders (but is typical for a superbike). The cockpit view is dominated by an updated 5-inch TFT screen that utilizes a new interface, controlled via a more logically arranged set of buttons and toggles on the left handgrip. Scroll through the settings and you can manage a seemingly endless number of variables, from traction control and wheelie control to engine braking and lean-angle-sensitive ABS thresholds. Personalized settings can thankfully be saved and recalled; there are so many, you'll want your preferences dialed in and preserved.

Out of pit lane and onto the track, the Panigale pulls ahead with a deceptively low-pitched engine note and a long-legged stream of power. Whereas the outgoing twin had a wild surge of low-end torque, the new mill feels more progressive and linear. When my instinct and ears told me it might be time to think about shifting, I glanced at the tach and saw only 8,000 rpm. Since redline doesn't come until 14,500 rpm, that means I would have left a considerable 6,500 rpm on the table (or 5,000 rpm until peak horsepower at 13,000 rpm). 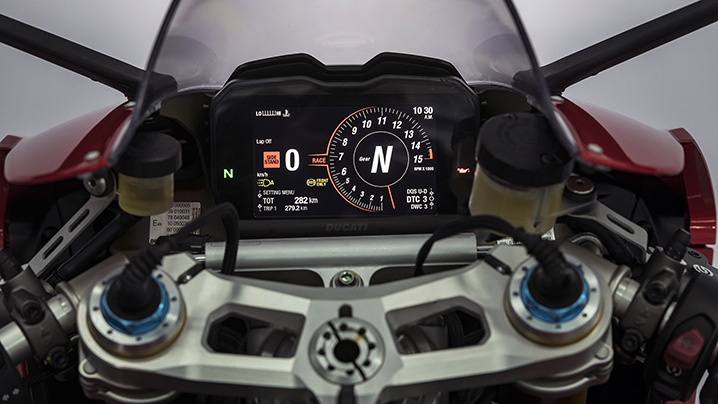 You could short-shift the Panigale on a racetrack, but that'd get you mowed down by faster traffic. Stay on it, and there's a meaty stretch of midrange torque and an eager climb to redline that caps off a breathtaking rush of power. While the clutch is required when engaging first gear, Ducati's so-called Quick Shift system eliminates the need for the left lever when shifting anywhere between second and sixth. Simply kick the foot lever up and the next gear engages; tap it down, and rev matching brings the engine up to speed for the gear below, enabling smooth mid-corner shifts just like any run-of-the-mill, paddle shift-equipped supercar.

With 14 turns in just less than 2½ miles, Valencia is a surprisingly technical track for this high-powered superbike (a larger-scale track such as Circuit of the Americas, as used for the 1199 Panigale R, might have been a more obvious choice). But tackling Valencia's first corner, a sharp left-hand hairpin, reveals this 430-pound motorcycle changes direction easier than you might expect. Mid-corner tracking feels solid and stable, and the bike responds reassuringly well to steering inputs thanks in part to Ducati's new aluminum frame. Weighing only 9.2 pounds, the twin-spar setup mounts directly to the engine, which is tilted 42 degrees backward for a lower center of gravity. The frame's relationship to the engine offers added torsional stability for enhanced feel. The powerplant, incidentally, is also used as an anchor point for the rear suspension and swingarm.

Flick through the esses, and it takes considerable self-control not to jump on the throttle too early: The power comes on with such immediacy, it's easy to throw off your rhythm if you prematurely tap into the torque curve. However, if you do twist the throttle before it's time, the traction control system seamlessly steps in to save your bacon from sliding; your line might be botched and you may end up in the gravel, but unless you do something exceedingly dumb, you should be able to keep the shiny side up. The system can be set to one of eight positions, 1 being the least restrictive. At 3, there's a bit less fury coming from the engine during corner exit, but the 2 setting wakes up the bike sufficiently, enabling enough rear tire sliding to execute easily controllable drifts. 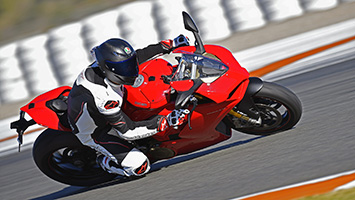 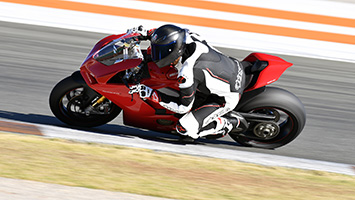 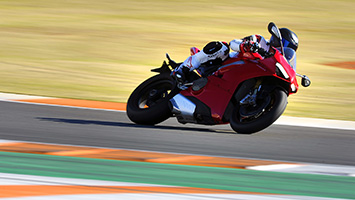 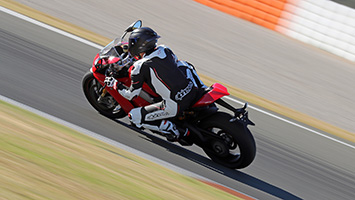 What does the number 1 setting — the closest to completely disabling traction control — feel like? I didn't manage to try it. But a fellow journalist (who happens to be a former AMA Pro Superbike racer) later described the setting as "f***ing perky"). Needless to say, all electronic systems (including a "slide by brake" system, which enables you to back the bike into a corner by dragging the rear stoppers) can be disabled. I dipped as low as level 2 (with 0 being off), leaning on the rider aids to keep my slick Alpinestars leathers and carbon-fiber AGV Piste GP R helmet (not to mention my skin and bones) intact.

Carry enough speed into the final corner and trail wide enough to kiss the rumble strip, and you're rewarded with a staggering blast of acceleration as the rear Pirellis hook up with the warm pavement below. Though there's less of a tendency to lift the front end compared with the 1299, the nose still climbs and lightens enough to wobble as the torque transfers through that tiny contact patch of rubber at the tail. I wrestled the grips to stay onboard, hanging on with arm strength as the Panigale charged ahead, upshifts punctuated with the shotgun sound of unspent fuel combusting through the exhaust. At the end of the half-mile straight I saw an indicated 278 kph (172 mph) before I used my upper body as an airbrake and grabbed a bunch of front brakes. Squeezing the lever hard enough clamps the Brembo monoblock Stylema stoppers down enough to make the rear end of the bike lift, a reflection of the sheer stopping power and front-end grip the Ducati is capable of delivering. Once you've scrubbed off 100 mph or so, it's a wide left, another short straight and then that hard-lefter to start the loop all over again. 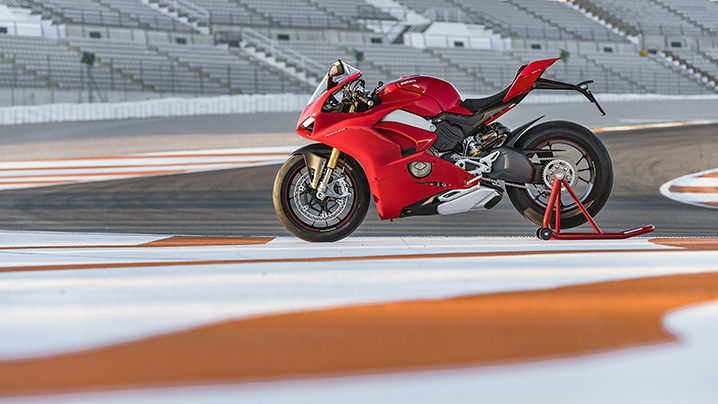 Two prevailing sentiments dominated my sessions aboard this blood red weapon: exhaustion and relief. Exhaustion because, well, despite its refinements in ridability, there are inherent physical challenges to leaning 430 pounds of bike through 14 turns every 2.5 miles, ones that invariably lead to stiff wrists, sore muscles and spent core strength. The relief comes because every safe arrival back into pit lane, whether a few corners were botched or the knee-dragging proceedings were aced, is a good one. One surprising observation was, at least during the 78 degree F conditions, I didn't feel Ducati's significant engine heat from the seat.

The 2018 Ducati Panigale V4 puts a bright red exclamation mark on the idea that speed worshipers are savoring a golden age of horsepower and technology. You don't have to be a motorcycle person to notice that, despite fierce competition from the Japanese big four ( Honda, Kawasaki, Yamaha and Suzuki), Ducati's V4 is still a relative performance value. Its entry price of $21,195 – or $26,995 for the V4 S model with the trick electronically controlled Öhlins suspension­ – is essentially the going rate for a sensible Korean sedan.

We will always love our cars here at Autoblog, but we have a soft spot for bikes that combine race-bred performance and bleeding-edge technology, while delivering mind-blowing bang for the buck. Through that prism, the Ducati Panigale V4 delivers a stunning package that departs from tradition while adopting a reassuringly raucous (and appropriately future-friendly) powerplant, a four-cylinder packed with enough soul to atone for the loss of the beloved twin.