The F1-inspired hypercar will be revealed at Frankfurt

Joel Stocksdale
Mercedes has been surprisingly forthcoming with details and information about its upcoming AMG Project ONE hypercar, having shown a completely undisguised powertrain. But the one part of the car the company has been tightlipped about is the body. Finally, the company has released a teaser giving us some idea of what the car will look like.

One of the first interesting things we noticed about this car is that it seems the three-pointed star is not going to have the same prominent position in the center of the grille as with virtually every other production Mercedes. Instead, it appears to be lying flat against the bodywork, away from the grille. This also seems to indicate that Mercedes isn't trying to shoehorn the AMG GT's fascia onto this unique car. The headlights are narrow slits unlike the more bulbous units on regular Mercedes. The silhouette also looks reminiscent of GT1-class race cars of the late 1990s, such as those based on the McLaren F1 and Mercedes-Benz CLK GTR. 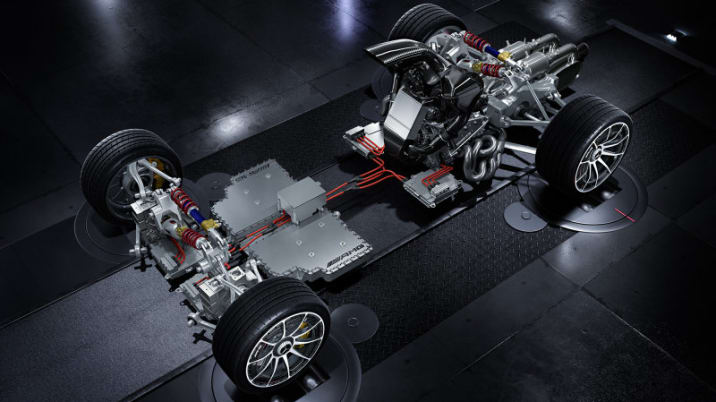 We'll have to wait for the car's full reveal at the Frankfurt Motor Show to get a clear look at the body, but we can tell you plenty about what's under the skin. It uses a hybrid powertrain consisting of an F1-based 1.6-liter turbocharged V6 that revs to 11,000 rpm and a quartet of electric motors. Mercedes confirmed with this teaser that the powertrain will produce over 1,000 horsepower and take the car to a top speed of over 217 mph. The company will build 275 examples of the car at $2.54 million a piece. Mercedes has said that the car can be operated like a normal car, but the engine will have to be rebuilt at 31,000 miles. Such is the life of a racecar engine, but we doubt prospective buyers will be too concerned about the short engine span, and many cars likely won't even reach that any miles. Expect more fascinating details to come forth when the car is revealed.