VW California XXL is the camper van of our dreams

Why name it 'California' and not sell it in the States?

This week, Volkswagen announced that it had built its 150 millionth car after nearly 80 years in the business. Many of those models, like the Volkswagen California camper van, aren't sold here in the U.S. That means there's always a twinge of jealousy when Volkswagen reveals something as awesome as the California XXL concept. The California is based on VW's Transporter van, but the XXL is supersized, based on the bigger Crafter work van, and it's a German-styled one-bedroom apartment on wheels.

The Crafter is Volkswagen's answer to vehicles like the Ford Transit, Mercedes-Benz Sprinter and Ram ProMaster. Its California is simply a camper van version of the Crafter, with a bed, a kitchen and option features like a single seat for the living area. The California XXL takes it several steps further, turning the camper van into something that could be considered a viable home in some major cities. The pop-up roof provides tons of extra space, while the heated floor and all-wheel drive make it livable anytime of the year.

The long roof features a fixed panoramic window. Just beneath that rests a heated and cooled bed. Moving the sleeping area up top provides room for more living space down below. There is a retractable wet room with a folding sink, shower and toilet. Hot water is provided with a gas heater. A pop-up window provides ventilation. The living area has an extendable work surface with sink, gas stove and a refrigerator. There's also an espresso machine in one of the cabinets. The burners sit flush when not in use. In addition to the space up top, there's another sleeping area in the California XXL's rear. 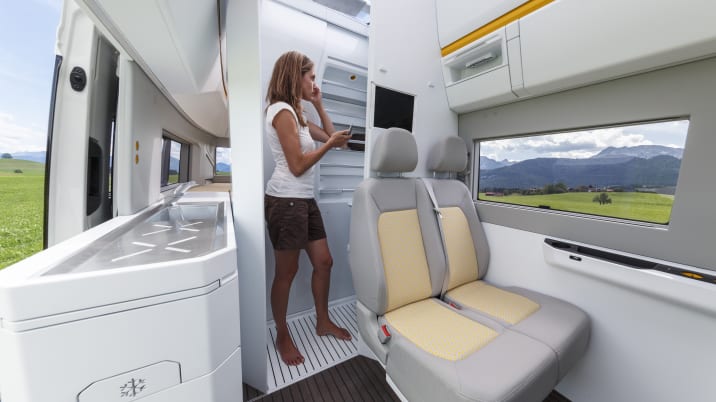 A sliding door opens into the living area. Near the door is a drawer for dirty shoes. There is compact lighting throughout the cabin, and nine 220V outlets (this is European) and six USB ports throughout the van. The cork floor and white cabinets help keep the space light and open. Dark interiors can feel claustrophobic, especially in something as packed as a camper van. The front seats swivel back. A bench seat adds space for two more. An extendable table has several size adjustments. A projector replaces a television, projecting onto the back wall of the wet room.

There's more going on outside. Two camping chairs can be stored in the tailgate. The interior table can be removed and attached to the California XXL's exterior. Behind the tailgate is a large storage space that's also accessible from the van's interior. Hidden out back are a 140-liter freshwater tank and a 90-liter wastewater tank.

The California XXL packs a Volkswagen turbodiesel and 4MOTION all-wheel drive. Power is sent through a six-speed manual transmission. The engine makes 175 horsepower and 302 pound-feet of torque.

It may just be a concept, but we want it all the same. Maybe we'll get a similar version of the new I.D. Buzz when it hits showrooms in a few years.