Only two people on the ground suffered minor injuries, with one going to the hospital. The pilot, a 30-year-old man from Oregon, reported no injuries.

"I'm so lucky," driver Amanda Hayes told KOMO News. She said the wing's plane scraped her car. "I just said, 'Get down!' And before I know it, I could feel the heat on my face... and like the fireball and the wing clipped at the end."

"When it was over, I wasn't sure if we were OK, if our van was OK. I don't know, that's probably the closest I've come to really thinking, 'oh this is the end, ' " she said.

Motorist Guanting Li captured the crash on his dashcam.

The plane, a single-engine Piper PA32, crashed in Mukilteo after losing power on takeoff from Paine Field, which is near the road and is the home base for Boeing's massive Everett assembly facility.

The plane struck clipped a powerline and a traffic signal, which ruptured its fuel tank - raining burning fuel on the cars below. The plane the skidded to a stop in the road. The crash and ensuing power outage created gridlock, as the busy Mukilteo Speedway thoroughfare was shut down for the evening commute. 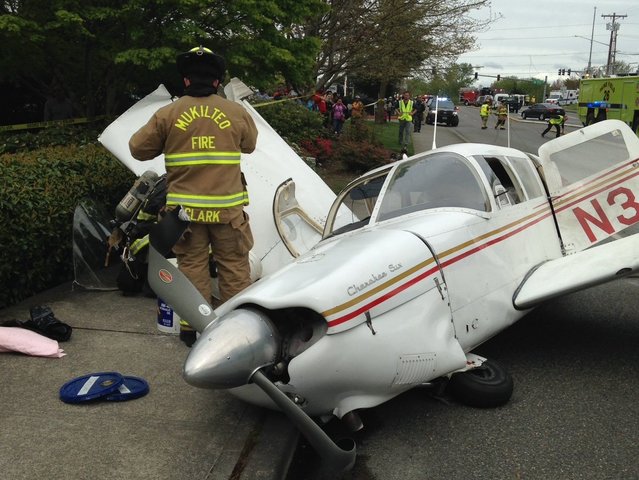