Hyundai built an awesome Santa Fe to cross the Antarctic

Joel Stocksdale
Remember those amazing Arctic Trucks Toyota Hiluxes Top Gear used to go to the North Pole? Well Hyundai created a Santa Fe in a similar way for a trip across Antarctica. To do so required some significant alterations, all of which turned the Santa Fe Sport into a wicked off-roader.

For added ground clearance, Hyundai fitted portal gears to the ends of the axles, a la Mercedes-Benz G550 4x42. Big tires also help with ground clearance, and the 38-inch examples used on the Santa Fe Sport are in fact enormous. They can even be deflated down to just 2 psi for maximum traction. And since the trip would be both long and cold, a huge 60.75-gallon fuel tank and an engine heater were installed.

To sweeten the Antarctic trip, Hyundai brought along the great-grandson of Sir Ernest Shackleton. For those unfamiliar, the elder Shackleton made an attempt to cross the Antarctic in 1916. Unfortunately, as the video explains, his ship became trapped in the ice during the journey. Shackleton and the crew abandoned their goal of crossing Antarctica, and instead worked to survive, which they did. So for the centennial of Shackleton's attempt, Hyundai invited the great-grandson along to finish the trip. Hyundai also carved the names of Sir Shackleton's crew into the Santa Fe Sport's sheet metal to symbolically bring them along, too. You can see it all in the video above, along with more details on the trip at this website. 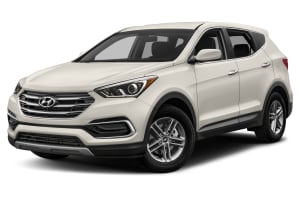