Although it received a thorough refresh for 2016, the Honda Accord is starting to show its age. Our spy photographer has snapped pics of a heavily camouflaged next-generation Accord prototype. Though this car wears all of the typical detail-hiding wrap and loose covers of an early-build test vehicle, we can make out some Civic-inspired details through the mask. That should be no surprise, as the two cars will share more parts than ever before.

We have photos here of two different cars, but unfortunately the more revealing one was photographed from a great distance. The Accord's new face borrows heavily from the current Civic. There are thin, wide headlights that end at the grille, with LED daytime running lights flowing from the corners down and in. The grill itself is much larger, topped by what's likely a chrome bar with the Honda logo square in the middle. The shape of the foglight housing looks to mirror that of the daytime running lights.

It's far more difficult to find details on the rest of the car. The roofline doesn't appear to be as aggressive as the one on the Civic, but it is more of a fastback than the current Accord. The taillights are still too camouflaged to make out any real details, and the wheels are straight off the current car.

Honda hasn't announced anything on the next-generation car, and based on these photos it looks like the new Accord still has quite a bit of development work to go. The car should get turbocharged power for the first time and may finally lose the wonderful but slow-selling V6. Look for the full reveal sometime in the next year, possibly as soon as the Los Angeles Auto Show in November. 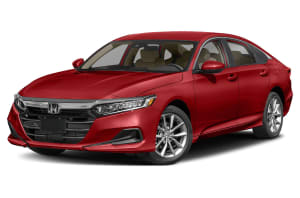