There is a viciousness lurking within the 2017 Mercedes-AMG GT C, a ferocity to the way it accelerates that sets it apart from its lesser, suffix-free GT sibling. Both have a 4.0-liter, handcrafted turbocharged V8 engine, but the differences in power and character are palpable. One car is fast; the other, well, vicious.

The thing is, and perhaps this is quite literally the beauty of the GT C, that it doesn't look particularly vicious. Certainly not as the GT C Roadster slathered in $9,900 designo Solarbeam Yellow paint. It's a pretty car that's lustworthy enough to earn buckets of buyers based on its looks alone, but like Alicia Vikander in Ex Machina, there's a tremendous machine disguised by all that hotness.

Hotness that is maintained despite a few functional tweaks made to enhance its aerodynamics and handling prowess relative the GT and the coupe-only GT S that resides in the lineup between them. The most obvious differences are at the rear, where a horizontal vent slices under the trunk lid, expelling air that's been shunted up from below to enhance the downforce already created by the roadster's speed-activated pop-up spoiler. Additional vertical vents just aft of the widened fenders – 2.25 inches more than the GT and GT S – serve as aerodynamic elements and visual endowments to make the tail end look a tad more bootylicious. 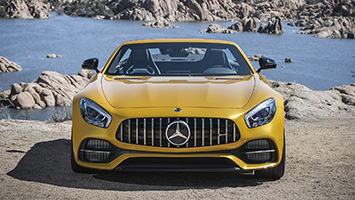 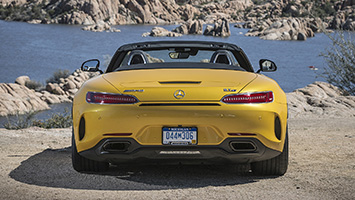 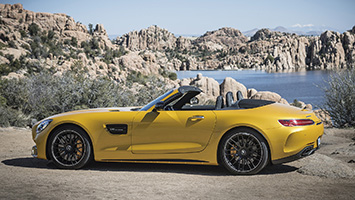 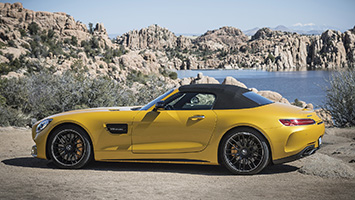 Now, these elements are shared with the more hardcore AMG GT R (which goes further with a rear diffuser, a manually adjustable wing, and other high-tech aero enhancements), as are the active aero shutters located below the AMG Panamericana grille that for 2017 now graces the face of every AMG GT model. And don't be surprised when that grille starts showing up on future AMG models as Mercedes seeks greater visual differentiation between its three sub-brands: Mercedes-Benz, -Maybach, and -AMG.

Other items common with the GT R include its active rear-wheel steering, the lighter lithium-ion battery, a Race driving mode, and the AMG Dynamic Plus package that includes dynamic engine and transmission mounts, increased front-wheel negative camber, and a redline that increases from 6,000 to 6,500 rpm. The GT C lacks the nine-setting traction control, various carbon-fiber components, manually adjustable coil-over suspension, and spectacularly awesome Green Hell Magno paint option, but it still presents a heightened driving experience more comparable to the GT R than to the lower two GTs. Really, think of the C as the more road-friendly version of the R.

And what that equates to is a sports car that defies the expectations you might have for something with a three-pointed star and the sort of Batmobile proportions that contributed to its SLS predecessor being an occasionally unruly and vengeful driving companion. It is particularly and impressively balanced, with the 4.0-liter V8 residing well behind the front axle – the carbon-festooned "engine cover" signed by Gunter von Whomeverschmidt in Affalterbach only covers a pair of coolant tanks. Sure, it can be a little difficult to place that long hood into tight corners at times, but dynamically, the GT C was equal parts capable and poised on the driving route's brief stretches of central Arizona winding road. As viciously fast as it is, never did it feel unruly.


The steering is also sublime, differing in ratio and calibration from the lower GTs', and combining with the rear wheels that toe in up to 1.5 degrees. Although there are different settings, they pleasantly aren't that different from each other in terms of their exceptional feedback and consistent, friction-free effort at speed. It's incredibly easy to be smooth and establish a rhythm driving this car. The clearest difference between the modes seemed to be on the highway where Comfort possesses more slack on center to make things less nervous and fatigue-inducing. You might even say more comfortable.

The steering of the AMG GT roadster, which we also drove, is further relaxed and ultimately not quite as sharp nor rewarding. Its ride quality is another story, however. Despite both cars being equipped with a continuously variable adaptive suspension (optional on the GT), their tuning is different and it's just enough to make the supposedly lesser car the more pleasant choice for grandly touring. The GT C doesn't exactly beat you up and the GT is far from plush, but given that both include firmer Sport and Sport+ settings, it would be nice if the C provided more comfort in Comfort.

So there would certainly be no complaints from this table if AMG let you order the GT suspension with the GT C's engine, which packs 550 horsepower and 502 pound-feet of torque. That compares respectively to 469 and 465 for the GT, 515 and 494 for the GT S, and 577 and 516 for the GT R. This is where that viciousness comes in, and not in a non-linear, jacking-up-the-boost sort of turbocharged way. It's an omnipresent ferocity; an engine that's impressively responsive throughout its rev range and perfectly natural in its ability to pin you into the hard AMG Performance seats. 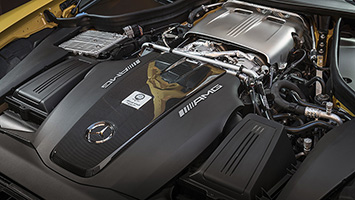 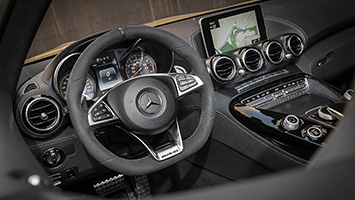 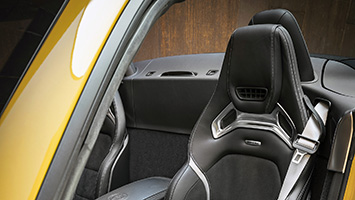 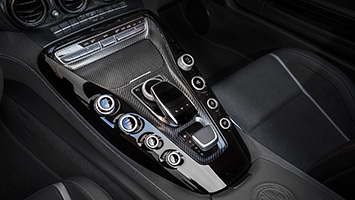 The accompanying soundtrack is sweetly mechanical and addicting, encouraging you to downshift early and often to let it sing to its handcrafted heart's content. Rocketing forth in the opposite direction up the gearbox brings in the talents of the standard AMG Performance Exhaust, complete with loud and extra-loud modes. Its song is spot-on, being just enthusiastic enough to make your toes tingle but not so obnoxious to draw complaints from the HOA. The snaps, crackles, and pops it produces when off throttle are also of the more subtle, natural variety than the rather contrived, farty efforts found in an increasing number of cars.

In addition to the extra power, the GT C's otherwise shared seven-speed dual-clutch automated manual transmission gets revised gearing – first gear has a higher ratio, seventh has a lower one. As always, this transmission is a gem when in Sport+ or the Race mode exclusive to the C and R. It expertly knows when it's appropriate to downshift when braking hard into a corner, and as a result you end up using the paddle shifters because it's fun, not because it's necessary. Meanwhile, the transmission's behavior in Comfort mode is just as buttery smooth as that of a traditional automatic. 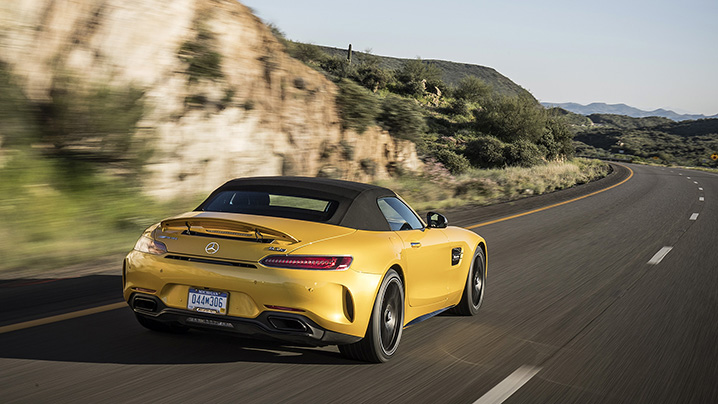 Now, all of the above applies to both GT body styles, but this is the first time we've had a chance to sample the new-for-2017 Roadster. Its decapitation results in an extra 55 pounds of structural enhancements along with a folding cloth top that neatly stows away in 11 seconds at speeds of up to 33 mph. When raised, the top does an excellent job of keeping wind noise out, while noise and buffeting are acceptable when lowered. The glare-resistant COMAND screen and available seat ventilation should be appreciated when the sun is doing its damndest, while the Airscarf neck heaters will be handy during tweed-cap-and-scarf season.

Whether the top is raised or lowered, however, the GT lives up to its grand touring name. There is more interior space than in the old SLS or the Jaguar F-Type, a sports car that's perhaps closest to the GT in overall concept, if not execution. Though verging on rock hard, the AMG Performance sport seats, complete with adjustable side and bottom bolsters, never stopped being supportive despite more than 300 miles of driving and a driver with a questionable back. There's even a useful pair of cupholders, a half-decent glovebox, and a trunk capable of stowing a pair of sizable weekend bags. Hell, even the driving aids are the usual superlative Mercedes norm, meaning you don't really need to drive much at all once on the highway.

As such, forget the highway. Arriving in dealers this fall, the GT C is truly one of today's special cars, possessing the increasingly rare combination of genuine automotive beauty and world-class, occasionally vicious performance. You'll want to drive it, you'll want to ogle it, you'll want to hear it.