There is understeer. There is oversteer. And then there's a four-wheel slide through an unavoidable spackle of rubber marbles that have built up through a fast, prolonged sweeper. A highlight reel of every other Indy 500 crash zips through my brain, as driver after driver goes off line, catches the marbles, and sails into the crunchy confines of the Safer Barrier.

But then, there is an awful lot to be said for downforce. For, even as its otherwise sticky Michelin Pilot Sport Cup 2 tires struggle with the marbles, the 2018 Mercedes-AMG GT R continues to tenaciously hold itself to Portugal's Autodromo Internacional do Algarve. The GT R isn't just an extra stein of power poured into the regular GT with some bigger, pricier brakes thrown on for good measure. That was largely the AMG M.O. of yesteryear. And, okay, it still has those, but with the R, you get extra vents, foils, ducts, and diffusers that all contribute to keeping the ultimate AMG GT adhered to Portugal through that grand corner. And, quite ideally, most of them are hidden away, preventing one of the most beautiful cars in the world from becoming an overwrought track-day special.

Those parts also provide plenty of faith to progressively feed in throttle as that long, final sweeper unwinds into Algarve's main straight as marbles kicked up from the car ahead pang, pang, pang off the GT R's long, long hood. The lateral G's first press me into the prominent bolsters of the optional AMG race seats and then into their thin backs. It's invigorating, but then comes the deep, guttural, nasty bellow of the hand-built 4.0-liter V8 massaged up to 585 horsepower courtesy new turbochargers with a higher boost pressure, plus a modified compression ratio, sharpened throttle mapping, and a modified exhaust (including an additional, center-mount port). Mercedes says the entire combustion process has been retuned and the grand total is 82 more horsepower than in the AMG GT S. 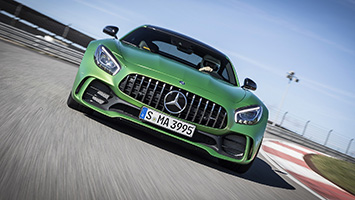 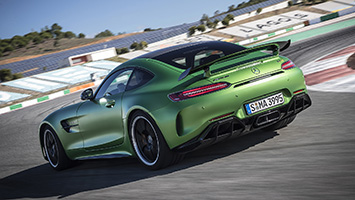 Yet, the resulting acceleration advantage isn't just a matter of extra power (the 0–60 run is estimated at 3.5 seconds versus 3.7 of the GT S). Few areas of the GT R have avoided the weightsaver's scalpel. This includes the wider front fenders, roof, torque tube, drive shaft, and multiple structural braces made of carbon fiber, plus forged wheels and composite materials taking the place of several metal parts. Mercedes had most of these components on hand at Algarve to let us hoist them ourselves, and the weight difference is obvious – lifting the nine-pound driveshaft makes you look like The Rock – and it's easy to see how all of it together shaves off about 200 pounds versus the GT S's curb weight.

A further 37 pounds can be cut by opting for the carbon-ceramic disc brakes, which provide fade-free, mammoth stopping power as the main straight dips downhill before leading into a sharp right turn. They are the definition of confidence-inspiring despite the very-Mercedes low-effort pedal that makes for perfectly pleasant real-world driving.

Really, though, it's the gentlemen in lab coats manning the wind machine that have made the biggest difference. It all begins up front. Those 15 chrome slats that boldly differentiate the R from its GT siblings and evoke the original 1950s SL race cars actually disguise the fact the grille has been tilted forward for improved aerodynamics. Beneath it is the "active air management system," or a wide box filled with vertical slats. They automatically open when additional cooling is needed, but mostly stay closed to reduce drag and direct air down under the car to the next bit of engineering wizardry: the exclusive new active aerodynamics profile. 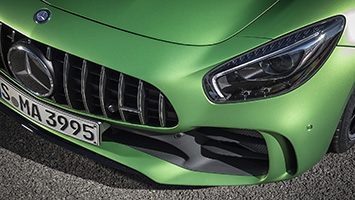 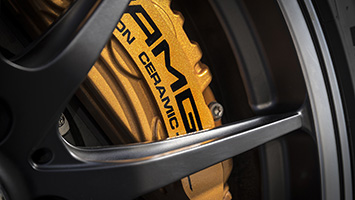 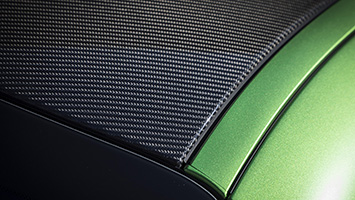 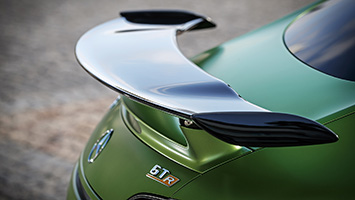 When the car is in Race mode at speeds higher than 50 mph, a carbon-fiber blade lowers by 1.6 inches and significantly changes airflow. This reduces front-axle lift by essentially sucking the car to the ground and leads to improved high-speed steering and stability. There wasn't a GT S on hand to compare to this improved bit, but there certainly is never a reduction in confidence from the GT R's steering, which lets you sharply and fluidly turn into corners. But more on that shortly.

As the air moves under the GT R, it's channeled to the special rear diffuser or up to the air outlet between the taillights (shared with the one-rung-lower GT C). These help the rear of the car remain planted, as does the carbon-fiber wing that can be manually adjusted to match the downforce requirements of a particular track or drive (an electric adjustment would've added weight).

And all that downforce continues to be appreciated as the Autodromo continues to throw curves at the GT R, particularly those cresting a series of blind hills that perpetually left me wondering, "which way do I turn again?" Handling the rebound of such track elevation changes and real-world pavement irregularities is the new coil-over suspension special to the GT R.

Most elements are constructed of forged aluminum to reduce unsprung mass; a thicker anti-roll bar is applied at the rear and the adjustable coil-overs allow you to alter the ride height if needed. They also combine with AMG Ride Control, the continuously variable and adaptive damping system that works within three ranges: "Comfort" for all street driving, "Sport" for undulating race tracks like the "Green Hell" of the Nürburgring for which that snazzy AMG Green Hell Magno paint job is named, and "Sport Plus" for pristine modern Grand Prix circuits like Algarve. 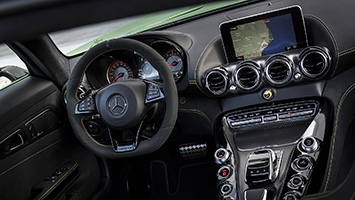 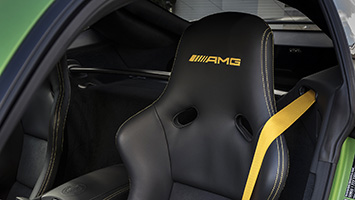 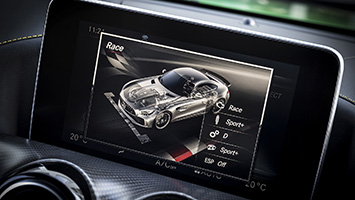 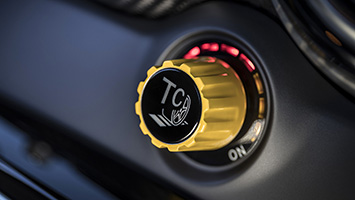 Now, out in the real world, "Comfort" is certainly a relative term. The GT R won't beat you up as much as other track-focused cars (or that other GT-R), but bad roads are still jarring, and being mindful of road undulations is an absolute must to keep that aerodynamic underbody un-crunched.

Yet, the real world does provide a better chance to showcase another advancement for the GT R: AMG's first application of rear-wheel steering. It's frankly a bit difficult to tell that it's doing its job on the track, but on a tight, technical mountain road filled with hairpins and switchbacks, its ability to turn the rear wheels up to 1.5 degrees improves agility and reduces steering effort. It also aids stability at higher speeds. Up front, however, the steering also differs in that it's electromechanical versus the hydraulic power steering found on the GT S. Again, one of those wasn't on hand, so it's tough to confirm the assumption that some feel is lost in favor of increased response – either way, there was no reason to complain about what's present.

Indeed, there's precious little to complain about with the GT R. Perhaps the long hood can make the car hard to place and the optional fixed-back race seats definitely won't fit everyone. There's also the matter of how it compares to other track-going greats.

"We compare it to the [ Porsche 911] GT3 RS," says Tobias Moers, AMG's chairman of the management board and one certifiably confident guy who's been kicking around the in-house tuner since 1994. "But we are faster. Always." 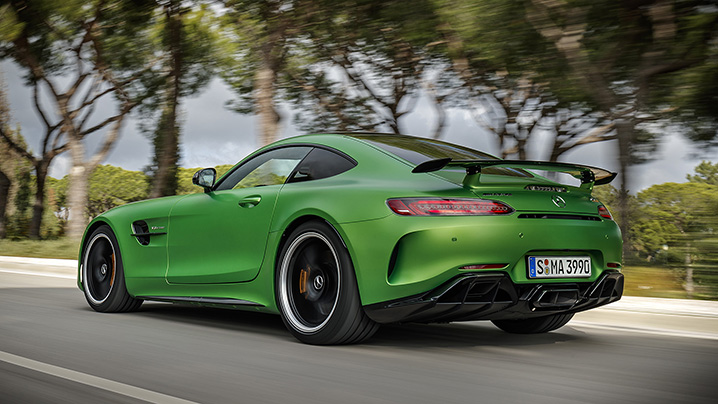 He proclaims that as if banging a gavel. Sadly, that's a challenge to be confirmed another day. And indeed, this one is coming to an end as the light drizzle foreshadowed by a rainbow in the distance (you can see it in our 360 in-car video) drifts onto the Autodromo. A perfect opportunity, then, to try out the GT R's final addition, the nine-mode adjustable traction control system. When stability control has been deactivated, the special yellow knob located within easy reach on the dash (it's cheekily un-Mercedes in its singular purpose and after-thought placement) is turned right for additional traction control interference or left to dial it back until shut completely off on level nine.

It really is a brilliant way to let you dial in the car to match your skill, preferences, and current road conditions, and to easily do so while driving extremely fast. At the same time, however, you don't have to turn stability control off to enjoy the GT R, as there is more than enough leeway available in Sport Plus to make you feel in control. Even when skipping across those marbles, the system was more than happy to let me deal with the situation.

Perhaps that's the lasting impression of the GT R: Despite its stem-to-stern enhancements over lesser AMG GTs, it remains an accessible high-performance machine that can serve and flatter a diverse range of talents. It's also not wholly inappropriate for places other than the track thanks to its reasonably livable suspension and 100-percent Mercedes-Benz interior.

It's certainly an emphatic message to the world that Affalterbach can do a lot more than just bigger engines, loud exhausts, and fancy wheels. 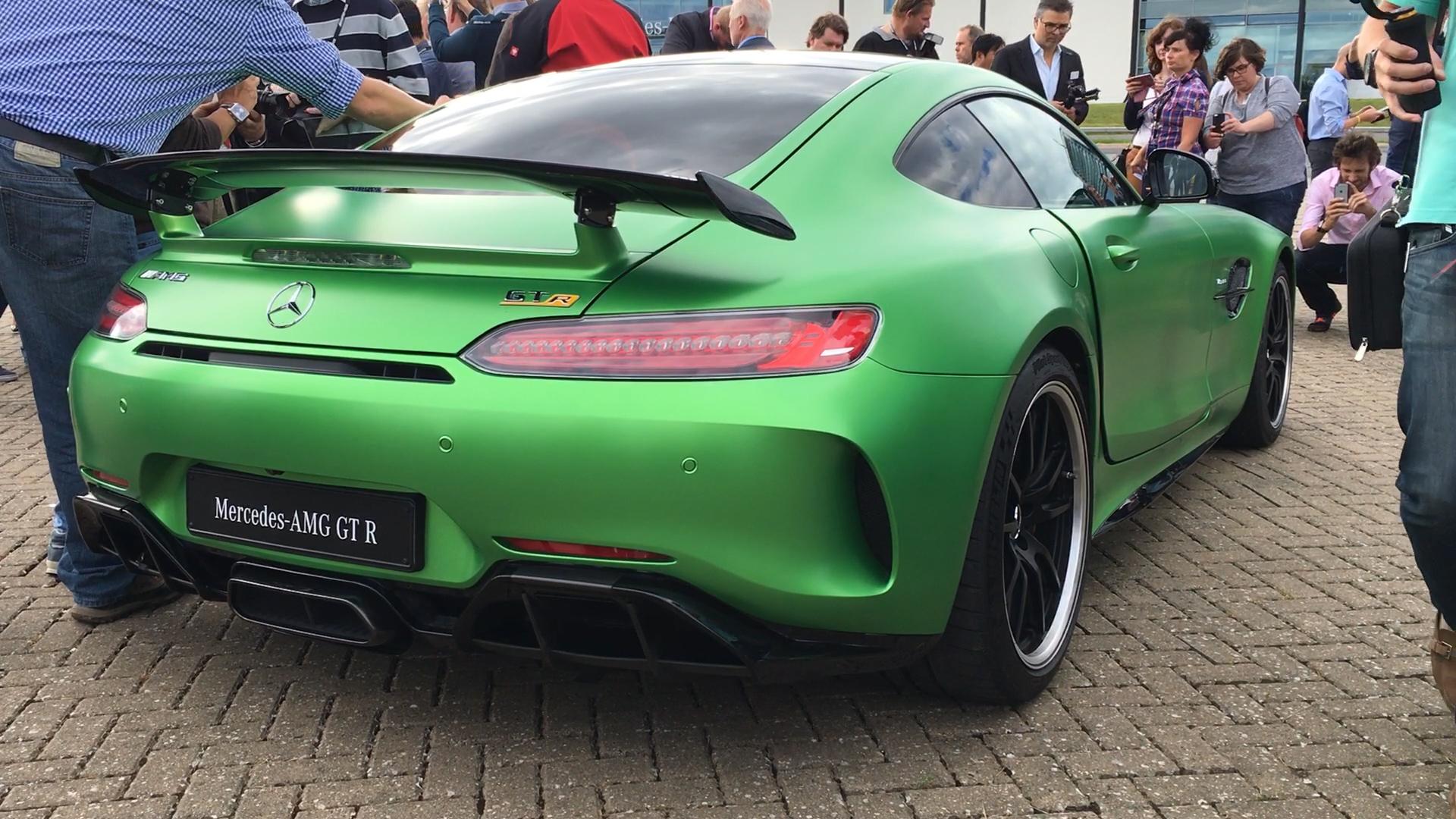