What it's like to drive Bentley's Continental GT3 racecar I'm gliding across the back roads of Napa in a Bentley Flying Spur V8 S, and all is right with the world. Two and a half tons of metal, leather, and hubris provide insulation, while the audio system's eleven speakers smother me with the syrupy sounds of Katy Perry as the landscape floats past. My guilty pleasure is mine alone, because this bank vault on wheels is practically soundproof.

But I'll soon be harnessed into a fearsome hellion that would terrify all but the edgiest of Bentley owners. I'm headed to Sonoma Raceway to drive the 2,800-pound, 600-plus-horsepower Bentley Continental GT3 racecar. Goodbye swankiness, hello madness.

Bentley probably isn't the first brand you associate with racing, but the Flying B's competition highlights include Le Mans wins in 1924, 1927, 1928, 1929, 1930, and, most recently, a top finish at the fabled endurance event with the brand's 2003 return. The 1-2 victory in '03 came in the wildly engineered LMGTP prototype class; it wasn't until a more relatable, Continental GT-based car was campaigned eight years later that Bentley unlocked the full potential of its rich history. 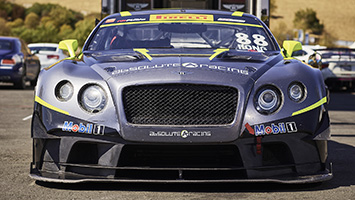 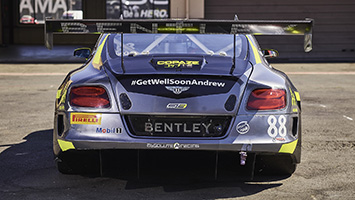 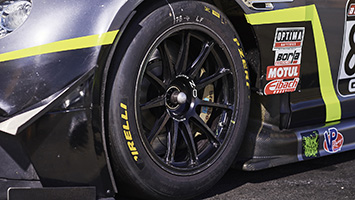 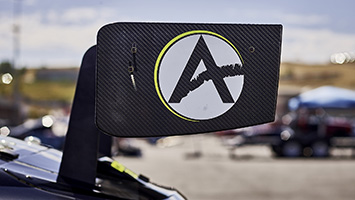 "Motorsports is essentially a business tool," Bentley race boss Brian Gush told Autoblog at the GT3's race debut three years ago, reinforcing the industry's familiar "race on Sunday, sell on Monday" mantra. But let's also tip a hat to the intangible: There's something undeniably cool about watching a beefed-up version of your daily driver battling it out on a world-class track, especially when that car is a fat-cat luxury coupe that seems better suited to the boulevard than the race circuit.

After swapping blue jeans for a Nomex jumpsuit, I watch as the GT3 emerges from the transporter, and the sight is downright intimidating. It's wide and low, with an impossibly big wing. There's another source of intimidation: While a small group of journalists has sampled Bentley's media car, I'm about to get behind the wheel of a privateer-owned car. No pressure.

"Ever met the owner?" a Bentley rep asks, referring to Team Absolute's Adderly Fong. "He's a big guy, mean, with a really short temper," he quips, which is essentially shorthand for "don't wreck his car." I crack a tentative smile, acknowledging the not-so-veiled message.

Bentley test driver Butch Leitzinger gives me the lowdown on this particular GT3, which happens to be coming fresh off a top-ten finish at the weekend's Pirelli World Cup Challenge. The tips are simple: no sudden throttle inputs, especially on corner exit; careful not to bottom out at the base of the hill; don't drive too slow during the car-to-car photo pass because the car runs hot; and of course, the recurring theme: Don't crash the thing. 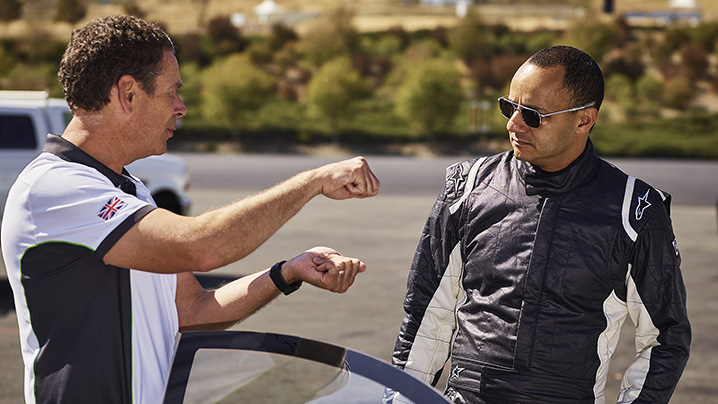 Almost everything about the rear-drive, tube-chassis GT3 racecar feels diametrically opposed to its all-wheel-drive roadgoing counterpart. Most immediately, the racecar's body panels appear shockingly insubstantial: while a production car's door tips the scales at 125 pounds, the GT3's weigh less than 15. And though the cockpit retains the basic waterfall shape across the dashboard, the space is unadorned, dominated by raw carbon fiber and unfinished surfaces. The standard hand-stitched, airbag-equipped steering wheel is replaced with a race unit strewn with more than a dozen buttons and dials. Analog gauges have been ripped out in favor of a strictly business LCD display, making the few holdovers from the production car (like interior door handles, knurled metal paddle shifters, and the HVAC vents with their organ pulls) feel strangely out of place.

Activate the fuel pump and hit the starter, and a cerebrum-rattling thrum resonates through your sternum. Cinched within a five-point harness, there's virtually no wiggle room in any direction. But thankfully, my 185-pound frame fits snugly in the Recaro race buckets, enabling me to focus on the first big task of the day: executing a smooth exit off the line. Moving from a standstill is trickier than it sounds, and involves carefully engaging a grabby clutch while feeding in throttle. Once successfully rolling, another layer of noise fills the cabin – the thick whine of the Xtrac six-speed's straight-cut gears. Unlike a developed-to-death production car, the GT3 shows its rough edges in pit lane, with partial throttle producing a neck-snapping driveline lash. 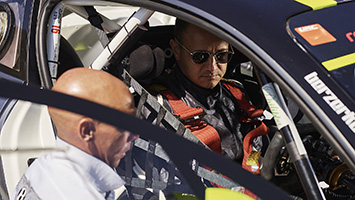 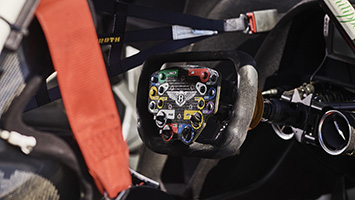 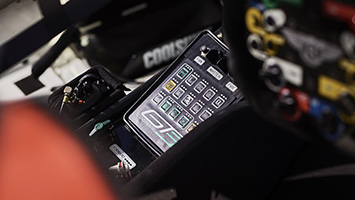 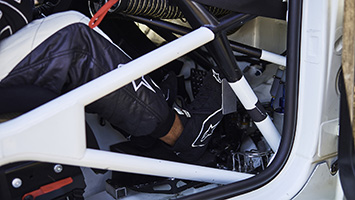 As I accelerate up the hill toward Turn 2, the GT3 comes into its own as only a racecar can, the increasing speed highlighting the machine's singularly focused personality. I take the first few corners easy; mechanical grip feels surprisingly scant at lower speeds, especially because the Pirelli PZero rubber is cold. Even with the traction control in the relatively restrictive 7 setting, the tail kicks out when the rubber isn't up to temperature. But as confidence builds and I acclimate to the right-hand-drive configuration (which actually feels surprisingly natural because it puts the apexes into a clear sightline on this counterclockwise track), my speed elevates and the GT3 starts to sing, its communicative steering conveying the surface below with accuracy.

A few things set the 4.0-liter V8's power delivery apart from that of the street car. For starters, the engine, which is capped at 600 horsepower in race spec, feels like its twin turbochargers spool more quickly and seamlessly, almost masking the fact that there's any forced induction. The race engine seems to wind up more eagerly, as if the drastic weight loss includes a big reduction in rotational mass. Maximum revs aren't particularly high – after all, Bentley has always been known for low-revving torqueiness, not screaming redlines – but keeping an eye on the progressive shift lights keeps you from bouncing off the rev limiter like an amateur. It takes a firm stab of the middle pedal to slow the car down, but the unboosted brakes have breathtaking stopping power when you get into them. It stops just as effectively as it goes, maybe even better.

Once you get a feel for how authoritatively it can decelerate, the GT3 can be driven with more anger leading into corners. Don't overdo it with the stoppers, and there's a shocking amount of cornering grip thanks to the car's tremendous downforce and sticky race slicks. The disconnect between expecting the car to fly off the track and its insistence to stay grounded requires a leap of faith. But once you've conquered the fear of failure, the GT3 manages to guide itself through high-speed corners with a level of adhesion that simply cannot be matched by street cars, which are invariably tuned for aerodynamic neutrality not downforce. 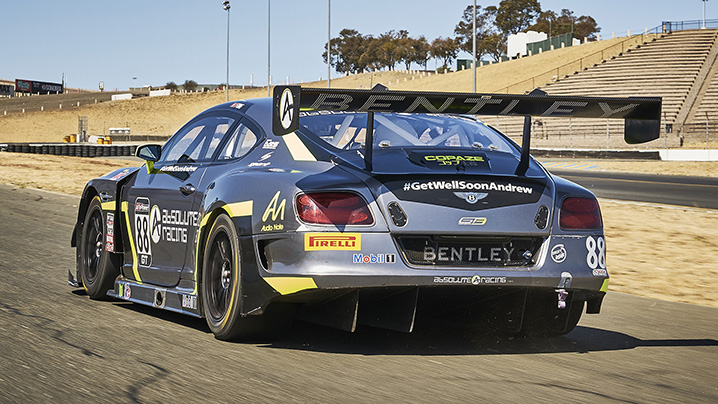 Another curious thing about racecars: the faster they go, the more natural they feel. While upshifts are clunky at low speeds, they're bang bang fast when you're cooking; the GT3's brakes squeak and moan at piddling velocities, but clamp down for real when you're flying. Try to drive a competitive racecar slowly, and you're punished with the ignominy of looking graceless and hamfisted. Push it to wring out its performance, and it makes you look good, as long as you don't push too far.

As I pull into the pits at the end of the session, it feels as though the GT3 has transformed from foe to co-conspirator. Its jarring harshness at low speeds make no concessions to drivability or comfort – virtually the opposite of the street car. But the GT3 comes alive with speed, responding with fierceness and effortless facility. Fast, vehement, and unapologetic, the GT3 racecar is a charismatic and eminently manageable counterpart to the roadgoing Continental GT, a steroidal leap of performance that does without the precious affectations of luxury. Quite simply, it just gets on with hauling ass.

As though to remind me of its sinister side, the GT3's exhaust pipe burns my ankle as I maneuver around the roll cage and climb out. My drive home in the Flying Spur is predictably peaceful and smooth, but with a slight stinging sensation on my leg that ensures I won't forget the bespoilered beast.