View All Specs
The 2018 Mercedes-AMG E63S can act as unruly as a Hellcat or glide with the comfort of an S-Class. Its adeptness at both is what makes it so compelling.

We're pondering this as we navigate crumbling roads near the Portuguese city of Faro. Slipping the big sedan into Comfort mode, we bide our time. Later that afternoon, we're blasting down the front straightway at the Autodromo Internacional do Algarve at 145 miles per hour. That's a split personality we like.

This isn't just an E-Class with a big motor. It's a sophisticated evolution of one of Mercedes' true – if understated – icons, and it's a step forward for AMG, which could easily have slapped its fabled badge on the E-Class, jacked up the power and the sticker price, and called it a day. Instead, all of the performance pieces blend with the sedan's traditional luxury bearing, resulting in something very polished. 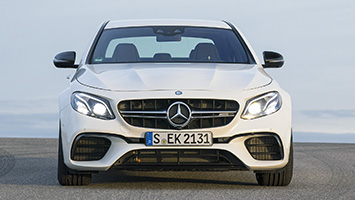 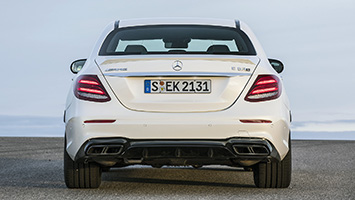 We applaud AMG's comprehensive approach, but the engine is always the spotlight feature. The 4.0-liter V8 has two twin-scroll turbochargers – instead of the single-scroll units AMG used previously – and they help the E63S make 603 horsepower and 627 pound-feet of torque. Mercedes previously announced plans to sell a base E63 model, rated at 563 hp and 553 lb-ft in the United States, but then changed its mind citing consumers' preference for optimal power. Versions of this engine are used in the C63 and AMG GT models, but it's the most powerful and most transformative for the E-Class. The last-gen E63 ran a twin-turbo 5.5-liter that maxed out at 577 hp – it's a great engine still used in some AMGs, but after trying the new one we have little nostalgia for it in the E-class.

Then there's the sound. Forget old-money or old-man-car stereotypes, the E63S flat-out roars in a visceral manner. There's a slight whine when you listen closely, but then it growls angrily with every jab of the throttle. Sixty miles per hour can happen in 3.3 seconds (quicker than the Cadillac CTS-V and BMW M5) en route to an electronically limited top speed of 186 mph. Befitting its softer side, the E63S can cut four cylinders at cruising speed to save fuel. The bipolar biturbo teams with a nine-speed automatic transmission, a reworked version of the one from lower E-classes, now able to handle the prodigious torque output and tuned more aggressively. In the E63S it uses a wet start-off clutch in place of a torque converter for better engagement. It makes good on its performance promise, but at times we felt the sophisticated gearbox made some uneven shifts. 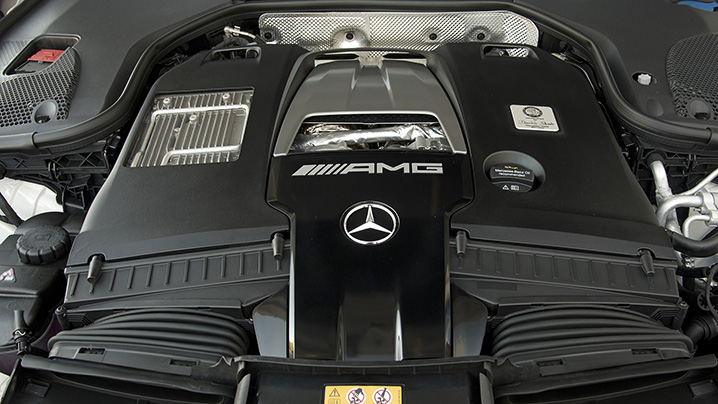 The E63S launches a new AMG Performance 4Matic+ all-wheel-drive system. Unlike previous 4Matics, this setup can send full output to the rear wheels under certain conditions, like on the front stretch at Algarve when pure straight-ahead speed is all that's desired. And yes, it has Drift Mode, which basically lets you lock it into rear-wheel drive. To activate, cue up the Race setting, turn off stability control, drop the transmission into manual mode, pull both shift paddles, and check with Dumbledore to make sure he's cool with what you're doing. We didn't have the opportunity to try it on the track, and we weren't about to put a six-figure Mercedes in Drift Mode on public roads in a foreign country, so just be comforted knowing the option is buried somewhere deep in the computers. The E63S has an electronic differential, one of the few differences over the E63, which has a mechanical diff.

Drift Mode aside, the track is the best place to showcase the angry side of the E63S. It's likely the only place we used all 603 horsepower, and blitzing the circuit with the Sport Plus setting selected provided the right balance of stability and athletic dynamics for this big car. Yes, track time is a bit of a cliché on automaker press events, but the E63S was a riot at Algarve, where the elevation changes rapidly and the tight turns and long sweepers pose challenges to drivers of any level. 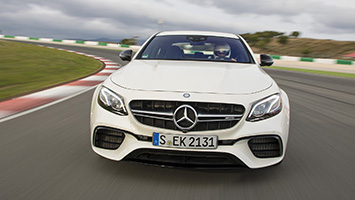 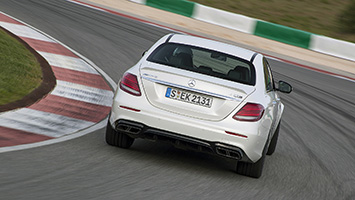 Back on the road, we found the steering to be direct and precise, exactly the kind of feel we want in a performance sedan. It's the sort of thing that keeps commuting interesting. The brakes are strong and there's minimal pedal travel. We expect the E63S will tip the scales just under 4,200 pounds, but it still feels nimble. Nearly missing an exit on the autoestrada, we pounced on the brakes, wheeled right, and pivoted onto our route. No drama.

During less drastic maneuvers, we preened as we rolled through small villages between Faro and Portimao. It's clear the E63S is not a regular Mercedes. The huge three-pointed star anchors the grille with blades flanking out horizontally. The flared wheel arches add just 0.67 inch of width but count for far more in style points. The slightly angled LED headlights add a judgmental look to the front end, as if the car is sneering, are you really up for this? Muted chrome accents are used tastefully, dressing up the beltline, door handles, greenhouse, and trunk lid (an optional package replaces the trim around the windows with black pieces, as seen here). The quad exhaust pipes are the only shiny pieces of chrome, though sound is their flashiest trait.

Inside, the E63S appearance is in line with less-powerful E-Class models, save for some racier trim and accent pieces. The AMG model offers performance seats as an option that have more bolstering and a reinforced shell – nice for the track, but they're skippable for most drivers. Our test car had two 12.3-inch high-resolution displays, one in front of the driver and one in the center of the dashboard. They're not touchscreens, and Mercedes' rotary wheel and mouse-like touchpad take some practice to navigate efficiently. Burmester speakers do a great job kicking out '80s rock, which we kept on a low background hum during our drive. It fit well with the purple ambient mood lighting that can be chosen from among 64 different color options.

This is all window dressing. Enthusiasts of means will seek out the E63S for its power and the aura of what it can do on a track, regardless of whether they ever take it there. The rest of the time, it can be as docile and well-mannered as almost anything Mercedes makes. As Mathias Schoettle, the car's chief engineer, summed up, it's "an executive jet on wheels." That's accurate, but more fitting for decadent S-Classes. The E63S is much rowdier than the executive jet-set would ever tolerate. And that's why we like it so much. 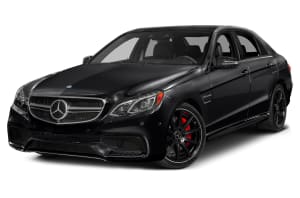