This Nissan Leaf reads your thoughts, projects them on the road

Chris Bruce
Do you remember what went through your head when you first started driving? You probably wouldn't want those thoughts visible to everyone, which means this specially modified Nissan Leaf would have been a nightmare. The EV projects its driver's emotions onto the road for every bystander to see.

For the video above, Nissan hooked the tech up to 30 young Japanese drivers who were also EV first-timers. The subjects wear a headband that monitors their brainwaves,monitoring for alpha waves – produced by the brain when a person is relaxed or concentrating – and beta waves, which show when someone is tense or excited. By measuring these levels, the system can project one of 33 messages reflecting the person's mood, and the words show up on each side of the car in bold, manga-style graphics. You know it's scientific because there are guys in white lab coats.

We're not sure how or if this system helps these drivers feel more comfortable in an EV, but the implementation looks fantastic. The combination of the graphics plastering the car and the way similar images appear on the road is a really fun idea, if just a bit distracting. On second thought, maybe it's not the best idea for a new driver. 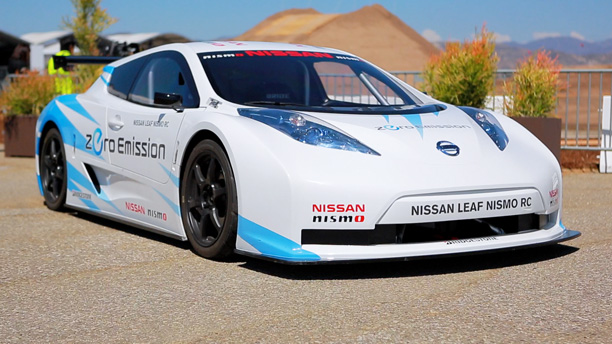 YOKOHAMA, Japan (April 13, 2016) – Nissan Motor Co., Ltd., to commemorate the 5th anniversary of the 100% electric vehicle (EV) "Nissan LEAF," has produced a movie featuring a special EV version that projects the driver's experience and thoughts behind the wheel. The film, entitled "THE ELECTRIC CARtoon! IN A DRIVING SCHOOL AT NIGHT", （https://youtu.be/ddWx_cI84UM） features young drivers experiencing EVs for the first time. Their reactions, thoughts and feelings are reflected in real-time word animations projected around the on-road Nissan LEAF.


■Project background
This project offers a visualization of drivers' experiences when handling the EV at night on a school course. The fun experienced by the driver is conveyed in eye-catching visuals, so that even those outside the car can share the excitement.

■LEAF visualizes the EV driving experience
The car used in the "THE ELECTRIC CARtoon!" project features a driver's headset that reads and analyzes brainwaves produced while driving. There are 33 visual patterns used to express the drivers' various states of mind. Driver brainwaves and projected animations are automatically matched, and visualizations are in a cartoon-style with speech and thought bubbles. The car exterior also has a unique design, taking inspiration from Japanese animation, which is now popular across the world.

In this project, alpha waves were defined as brainwaves emitted when the brain is in a conformable state, and beta waves as those when the brain is in an excited state. As a result, about half of those taking part emitted beta waves when starting the EVs and more than 90 percent emitted a significant quantity of alpha waves when turning road corners. In this experiment, we confirmed that those taking part were in "a comfortable state" or "an excited state" while they were driving EVs.