Bradley Iger
As much of the nation grapples with some fairly unpleasant weather conditions, most of us will be forced to keep our fun rides locked up in the garage for the foreseeable future. But because the love of all things on four wheels never takes a break, we find ways to get the fix even while stuck in the house. Below is a list of ten enthusiast flicks to rent, stream, or go all-in and buy to get you through the winter.

10. Ronin: If watching European heavyweights like the BMW M5 and the Audi S8 do battle through the streets of Paris and Nice isn't enough to sell you on this one, then the legitimately awesome heist-gone-wrong storyline should seal the deal.

9. Repo Man: This early '80s cult classic follows the lives of a group of misanthropic Los Angeles repo agents as they attempt to track down a '64 Chevy Malibu with a mysteriously high bounty. Aliens, punk rock, vintage American iron, and hilariously bizarre antics abound in this gem.

8. Gone in 60 Seconds (1974): Not to be confused with the Nicholas Cage-fueled remake of the same name, the original Gone in 60 Seconds will always hold a place in every gearhead's heart mainly due to its 40-minute(!) car chase in which nearly 100 cars are destroyed – including a few that weren't actually supposed to be.

6. Cannonball Run: Burt Reynolds, Farrah Fawcett, Dom Deluise, Jackie Chan, Roger Moore, Dean Martin, Sammy Davis, Jr., and a chimp all race across the United States in exotic rides from every corner of the globe to claim a massive prize in this awesomely campy 1980s treasure. Inspired by the real-life outlaw road race organized by Car and Driver scribe Brock Yates in the '70s. 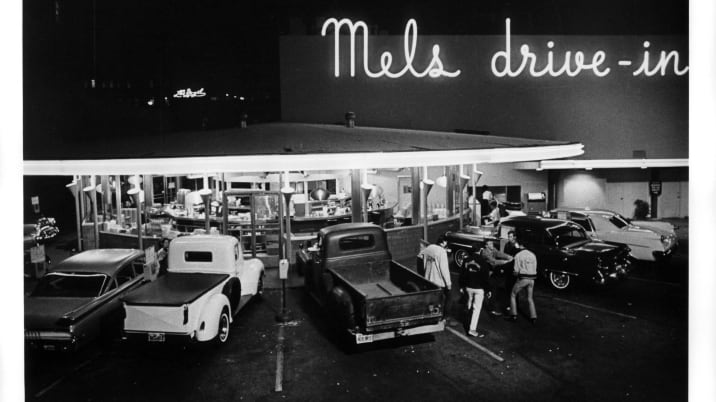 5. American Graffiti: Before Star Wars, director George Lucas was known for this lovingly constructed homage to early '60s SoCal hot-rod culture. While the film tackles the coming-of-age trials and tribulations of a group of Modesto teenagers on a pivotal night in August of 1962, it also prominently features some downright iconic street machines, like Milner's Ford Deuce Coupe and Falfa's '55 Chevy.

4. Smokey and the Bandit: Buried somewhere deep within this film, there's a plot line about smuggling a truckload of beer from Texas to Georgia. But honestly, the only elements of this movie you really need to concern yourself with are Burt Reynolds, Sally Fields, and a '77 Trans Am with a screaming chicken on the hood that goes sideways and does huge burnouts whenever possible.

3. The Road Warrior: Decades before Mel Gibson went off the deep end, he donned the role of the utter badass Mad Max. In this post-apocalyptic, vehicle-centric sequel to the original Mad Max, the highways have turned into battlegrounds, and Max's road-hardened V8 Interceptor is showcased in all of its supercharged glory along with various other strange and wonderful DIY assault vehicles. If you lamented the severe lack of Interceptor in Fury Road, this one might help make up for it. 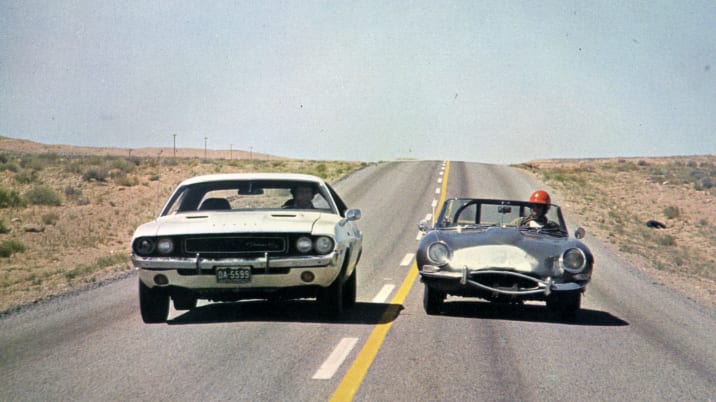 2. Vanishing Point: For reasons unknown, car courier "Kowalski" puts a 15-hour time limit on himself to get a vehicle from Denver to San Francisco. Armed with nothing more than a Hemi-powered Dodge Challenger and a head full of amphetamines, he leads throngs of police on a multi-state chase. The proceedings are chronicled by a freedom-fighting blind radio DJ along the way as the driver encounters snake charmers, naked women on horseback, and various would-be street racers looking to test his mettle. Hey man, it was the '70s.

1. Bullitt: Bullitt stands on its own as a great '60s crime drama starring the perennially cool Steve McQueen. But what Bullitt will always be remembered for is the truly jaw-dropping car chase through the streets of San Francisco between McQueen in his '68 Mustang fastback and the bad guys in their sinister Dodge Charger R/T. Simply put, it is the car chase by which all other car chases are measured. And to this day, nearly five decades later, it has yet to be topped.
X