Nissan Leaf depreciates worse than any other car [UPDATE] " Nissan was a pioneer in the world of mass-market EVs, and now we are once again pioneers as we create a healthy, secondary market for used EVs. A big factor in the drop in 2011 and 2012 Leaf residuals is the price reduction when we launched the 2013 model. Nissan has taken a number of steps to enhance the value of Leaf through the vehicle's life cycle, including adding the car to our Certified Pre-Owned program and offering replacement battery packs. We are also developing additional strategies to preserve the value of off-lease Leaf vehicles, and we are in the process of communicating those plans to our dealers."

Electric cars will save you money on gas, but that doesn't make them a sound financial proposition. In fact, buying one of the leaders of the EV movement, the Nissan Leaf, is actually a terrible financial decision (for the first owner, at least).

Leafs depreciate more than any other vehicle on the market, up to 48 percent in the first year, according to a study by used-car website Carlypso. The site looked at retail prices for new 2015 models and compared them to what they were sold for in wholesale used-car auctions, USA Today reports. The Leaf is in the lead, but it's far from the only surprise.

Premium models are notorious for rapid depreciation, so it's no surprise to see the Mercedes-Benz SL-Class holding down the number three spot (41 percent) and the Cadillac CTS at number ten (34 percent), but it's the slew of popular mainstream models that really shocks. Number two, at 45 percent, is the Dodge Charger, while the fourth position belongs to the Chevrolet Camaro (39 percent). With CUVs, SUVs, and pickups dominating sales, their absence on this list is to be expected. Of the top ten, the pre-historic Chevrolet Express van is the only large vehicle listed.

The Leaf's poor performance is based in part on the $7,500 federal tax credit enjoyed by first-time owners. According to USA Today, these savings often trickle down to second-hand buyers, which accounts for some of the precipitous depreciation. But as the only car entitled to a federal tax credit on the list, this study should still be a source of concern for any Leaf's first owner. 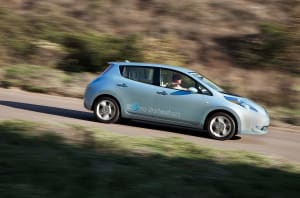