Steven J. Ewing
It seems weird to type " Genesis" without " Hyundai" in front of it – unless we're referring to the band, of course, which we aren't. What we have here is the first car that'll launch under Hyundai's new premium brand, officially called Genesis. This is essentially the replacement for the Equus, and when it reaches the States, it'll be called G90.

The G90 clearly makes strong use of Hyundai's "Athletic Elegance" design language, and looks like a more premium version of the existing Genesis sedan. There's a long hood, hexagonal grille, and vertically oriented taillamps that flow down the rear fascia. Judging by these low-res spy shots, we like what we see – even if, from some angles, it looks strangely familiar.

Genesis (the brand) launches next month in Hyundai's home market. Following the G90, the Genesis sedan as we currently know it will move to G80 nomenclature, and a midsize, rear-wheel-drive sedan – G70 – will follow. A luxury SUV and sport coupe will round out the premium lineup.

Head over to Korean site Bobaedream.co.kr for a view of the G90's rump, as well. 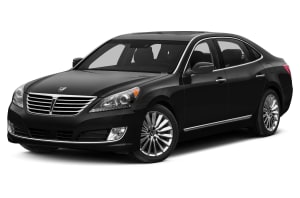