Dark And Stormy, But Oh So Pretty 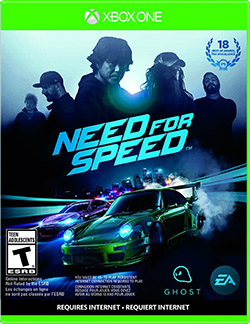 Ghost Games and Electronic Arts have really talked up the rebooted Need For Speed series. Promising "Five Ways to Play," this latest iteration was touched by Ken Block, Magnus Walker, Akira Nakai, Shinichi Morohoshi, and drift crew Risky Devil, to add a dose of the real-world to race game fantasy.

The results are... mixed. If, like us, you walk into this game expecting tutelage from Gymkhana pro Ken Block or tuning and design advice from Nakai-san, you're going to be disappointed. With over 50 percent of the events completed, the "Five Ways to Play" angle essentially feels like a gimmick, but there are still plenty of reasons to recommend this latest NFS game.

Need For Speed is visually stunning. It's blessed with some gorgeous scenery – the dark, stormy visual palette of Ventura Bay, NFS' main setting, is gritty and visceral. In particular, the lighting of this perpetually dark world gives the game an inescapably urban feel.

Balancing out the beautifully lit and rendered scenery is a solid weather system. It lacks the technical chops and impact on driving that you'll see in Forza Motorsport 6, but the weather looks nice here. Puddles on the ground form realistically, but hitting them won't cause you to hydroplane. If anything, rain just makes it a little bit easier to throw your car into a gnarly drift (brah!).

All this rain, darkness, and street lighting allows the cars to really pop, especially if you get wild with the paint. Metallic, shiny shades work best, showing off a realistic glean as the light plays across the water-covered surface. But there are shortcomings. The cars lack the depth and detailing that you'll see in a Forza game. The paint and parts don't stand out so starkly, and fine details, like orange peel and dirt, are pretty much absent. Damage rendering, on the other hand, is impressive, although again, not quite as good as FM6. But since it's so dark most of the time, you'll rarely notice these shortcomings, unless you're looking at your car in its garage. Overall, this game is almost cinematic, like something you'd expect in a film noir. 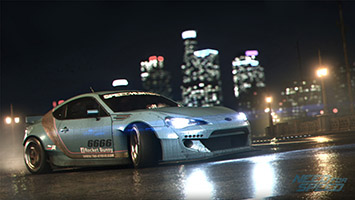 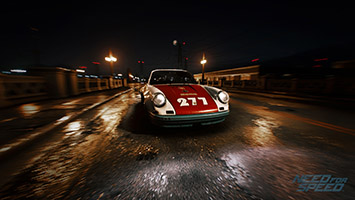 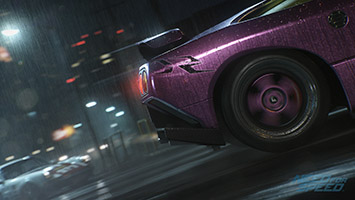 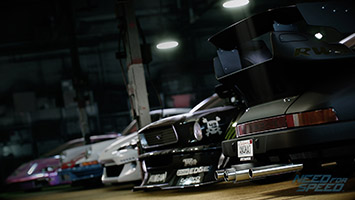 And that's an important point about NFS. Unlike past games where the story was almost added as an afterthought, this reboot is at least somewhat driven by real-world cut scenes. These break up the monotony of trundling along with some disembodied voice yelling at you about how awesome you are or what you should do next (although that still happens). The scenes all take place from your nameless, voiceless driver's point of view, and feature a crew of five others, each of whom identifies with one of the game's "Five Ways to Play" and says things like "bae" unironically. For example, Amy is your tomboy gearhead repping Nakai-san's Build angle, while Spike, a bad Kid Rock impersonator, worship's Magnus Walker's Speed play style. For the most part, these characters are unmemorable clichés with an unhealthy fascination with their chosen idol. Sad and desperate, in a way.

Then there's Need For Speed's frustratingly limited car selection. It's not that the 51-car catalog isn't robust – the last game, Need For Speed: Rivals only had 47 – so much as the quality of the cars is uninspiring. Why are the only Ferraris in the game the 458 Italia and the F40? Why do we have a pre-refresh Dodge Challenger SRT8, but no Hellcat? Why is the only Subaru WRX/STI a 2010 wagon? We like the inclusion of the Mercedes-AMG GT, but what about the rest of the range? It's not like EA doesn't offer incredibly similar cars – the Scion FR-S, Subaru BRZ, and Toyota GT 86 are all individually represented.

On the street, differences in sound and acceleration are easily noticed, but each vehicle feels mostly the same. Sure, some drift better than others, but you aren't going to be faced with a whole lot of understeer from the front drivers or uncontrollable oversteer from the RWD models. We expect the Toyobaru triplets to feel the same, sure, but there really ought to be discernible differences between a 1997 Toyota Supra and a 2009 Honda S2000. 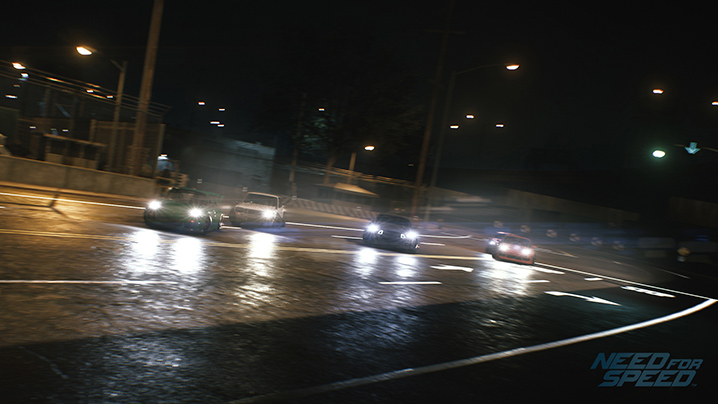 EA and Ghost Games continue to skip a manual transmission option for the Need For Speed games. Suffice it to say, it's a joke that a game with such an enthusiast lean refuses to let its players select their own gears. And for a series that was once a leader in offering an in-car view, its continued absence is a huge disappointment.

During play, there's an overlying issue where the entire game will seemingly hiccup. The screen and sound will skip, and if you were unlucky, you lose control of the car. It happens during cut scenes and races alike, so it seems like a more overarching issue than a problem with our Xbox One hardware.

That said, NFS' gameplay is varied and entertaining. There are nine different event types, each of which breaks down to three types of competition. In time trial and time attack races, you're going against the clock. Circuit, sprint, touge, and drift contests will see you go against AI competitors (who are either insurmountably faster than you or laughably easy), while drift trials, drift trains, and Gymkhanas require drivers to beat a high score. Combined with the miles and miles of open roads and the ability to challenge other drivers to impromptu races, it's difficult to get bored when driving around Ventura Bay. It also looks like there will be a versatile multiplayer option – this is an always-online game, after all – although we weren't able to test it. 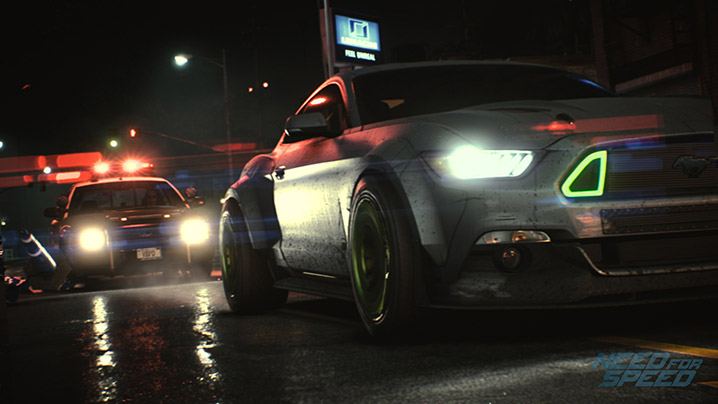 Like NFS: Rivals, this game has a police element. But unlike that game, where jerks from around the globe can assume the role of the cops and make "arrests" for no logical reason, the AI police of Need For Speed are firm but fair. Unless you're doing something wrong, they're not going to bother you. And if the blues-and-twos do flash you, you can either pay a small fine or make a run for it, which is remarkably easy. Apparently the cops can bust you, but we always manage to avoid it.

Whether you're racing formally or just raising hell around town, you'll be relying on two forms of currency. Credits are what you'll use to buy new cars and parts, and can be won in the usual way. Rep, meanwhile, is kind of like Forza Horizon 2's skill points. Doing anything from carrying a high speed to taking out a lamp post to tying on a lurid drift will earn you points, which accumulate until you level up. This is important; your level determines which visual and performance mods you have access to (don't worry, every car is available at the start of the game, provided you have the credits). 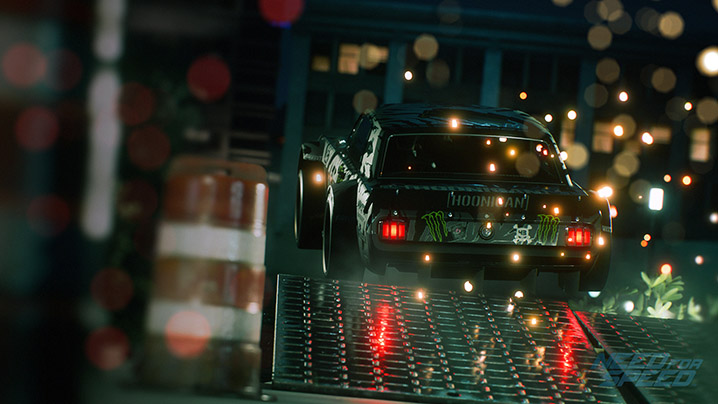 And boy, are the visual mods something worth worrying about. NFS hasn't hit a grand slam here, but it's easily a two-run homer. You can swap fenders, bumpers, headlights/taillights, mirrors, spoilers, diffusers, splitters, wheels, tires, and exhaust pipes. That's in addition to a versatile but cumbersome paint/decal tool. You can also tweak your ride's stance, adjusting ride height, front and rear track, and camber, although so far as we can tell, these settings have no impact on how the car handles. Perhaps our biggest frustration is that while every car shows the same hard points for tweaking, there are a lot of vehicles that won't let you make adjustments. Some things make sense – of course we can't swap in an aftermarket bumper for a car that isn't on sale yet, like the Ford Focus RS or BMW M2. Others, though, are genuinely confusing. For example, why is a tuner legend like the RX-7 limited to just one aftermarket taillight option? Why is there only one front bumper for the WRX STI? Why can't you make a single change on the Ferrari 458, aside from an overarching, all-in-one body kit?

What we have here are the bones of a great game that could really use some fleshing out. For every area it excels in, there are two spots where it lets you down. Do the cars look beautiful? Sure, but there aren't a lot of them. Will you have a bunch of events to race? Of course, but you're not going to be able to feel any difference between the cars. It's a game of wildly frustrating contradictions mixed with idiosyncrasies that boggle the mind (why is it always dark and raining?!). But even so, this is a game we can imagine adding to our collection. The shortcomings don't outweigh all the things we like.

Need For Speed will cost $59.99 when it hits stores on November 3, for the Xbox One and Sony Playstation 4. It will be available on PC in the spring of 2016.