The Ferrari F12 Berlinetta has never been in need of a performance boost, but Maranello has given it one just the same. Feast your eyes on the new F12 TdF.

The latest Prancing Horse recalls the legendary Tour de France ( for automobiles, not bicycles) that Ferrari dominated nine years running from 1956 through 1964 – and the elegant long-wheelbase 250 GT named in its honor. But the F12 TdF is much more about forward momentum than looking back. Power is up, weight is down, and everything's been tightened up, with new systems on board to keep it all together.

Of course, Ferrari being Ferrari, it didn't just tinker with the engine and call it a day. It also returned the seven-speed dual-clutch transmissions to deliver upshifts 30 percent faster, downshifts 40 percent faster, and with ratios six percent shorter. The track is wider, the wheels larger, and the one-piece brakes are lifted out of the even more extreme LaFerrari. Ferrari has also fitted the TdF with a new Virtual Short Wheelbase system – Modenese for four-wheel steering – that sharpens turn-in, increases high-speed stability, and keeps the tail from spinning around to fast on the wider front tires.


As you can see, the bodywork has been substantially redone as well, to be both lighter and more aerodynamically efficient. As a result, the TdF produces 87 percent more downforce than the stock Berlinetta. And thanks to its more extensive use of carbon fiber – not to mention the stripped-out cabin – the whole thing weighs a good 240 pounds less.

The result of all these enhancements, Ferrari says, is a 0-62 time of just 2.9 seconds. Keep the throttle pegged (as you would most certainly be tempted to do) and it'll reach 124 miles per hour after 7.9 seconds, topping out at over 211 mph. It's also been clocked around the company's private, on-site Fiorano test track in 1 minute and 21 seconds, which is a good two seconds faster than the Berlinetta or the 488 GTB – and barely more than a second adrift of LaFerrari, the fastest road car ever to lap the circuit. That's a whole lot of performance, especially from a front-engined car. But try not to be too enamored, because Ferrari will only make 799 examples – which, if tradition is anything to go by (as it usually is in Maranello), is one less than the Italians figured they could sell.

Maranello, 13 October 2015 – Ferrari reveals the F12tdf which pays homage to the Tour de France, the legendary endurance road race that Ferrari dominated in the 1950s and '60s, particularly with the 1956 250 GT Berlinetta which won four consecutive editions. It was a race that rewarded cars that combined maximum performance with the driveability and ease of use that enabled the competitors to race for hundreds of kilometres a day over fast, tortuous roads and on circuits. The F12tdf is the ultimate expression of the concept of an extreme road car that is equally at home on the track, and just 799 will be built.

The F12tdf is a concentration of technical innovations which involve all those areas central to Ferrari's DNA: engine, aerodynamics and vehicle dynamics. As a result, in terms of acceleration, roadholding and agility, the new berlinetta is second to none.

The F12tdf's performance is assured by the 780 cv, naturally-aspirated V12 derived directly from the F12berlinetta's multi-award-winning engine. The car's exhilarating dynamic behaviour, specifically its lateral acceleration in corners, is due to an 8% increase in the ratio of the front tyres compared to the rear ones. The car's natural tendency to oversteer as a result of the change in tyre sizes is compensated for by the innovative rear-wheel steering system – known as the Virtual Short Wheelbase, which is integrated with the other vehicle dynamic control systems – that guarantees the steering wheel response times and turn-in of a competition car while increasing stability at high speed. Cornering speeds are also higher thanks to the significant increase in downforce - +87% - which has reached unprecedented levels for a front-engined V12 berlinetta.

A radical redesign of the bodywork, interior, engine, transmission and running gear, along with the abundant use of carbon-fibre inside and out, has slashed 110 kg off the car's overall weight.

All of these factors combine to produce record performance figures: 0-100 km/h in 2.9 seconds and 0-200 km/h in 7.9 seconds in addition to a substantial boost in lateral acceleration. The F12tdf laps Fiorano in just 1'21".

Outstanding stopping distances are guaranteed by the adoption of the new Extreme Design one-piece brake callipers already seen on the LaFerrari. This new-generation system means the car can brake from 100-0 km/h in just 30.5 m and from 200-0 in 121 m.

Numerous modifications have been developed for this engine, starting with the use of race-inspired mechanical tappets and variable-geometry intake trumpets used on Formula 1 cars which help boost volumetric efficiency at high revs.

The F12tdf is equipped with a specific version of the F1 DCT with 6% shorter gear ratios that delivers 30% faster upshifts and 40% faster downshifts.

Ferrari's engineers sought to create an extremely agile and powerful car which could also be driven by less expert drivers. They drew on the wealth of experience built up in the XX programmes which are dedicated to developing extremely high performance cars driven by non-professional drivers.

Extraordinary chassis dynamics, in terms of maximum lateral acceleration and responsiveness, are in part achieved by the increase in the front tyre dimensions, which jump from 255 to 275, along with the front channel size - up from 9.5" to 10". This modification guarantees higher lateral acceleration generated by the front axle but, alone, this would have caused oversteer on the limit, making the car more challenging for less expert drivers.

To enable even gentlemen drivers to make full use of the performance, Ferrari developed its new Virtual Short Wheelbase system. Debuting on the F12tdf, the rear axle is active, allowing the rear wheels to pivot around a vertical axis.

The Virtual Short Wheelbase improves the car's responsiveness to make it feel more agile, with instantaneous turn-in that can be best appreciated on twisty roads and on more technically challenging tracks while, at the same time, improving stability at high speeds.

The F12tdf's aerodynamic performance is nothing short of record-breaking – its aerodynamic efficiency figure is 1.6, almost double that of the F12berlinetta. Downforce is 230 kg at 200 km/h, which is an impressive 107 kg more.

Development affected every area of the car's surface, producing striking elements that lend its forms a unique sleek power. At the front, a highly complex bumper contributes to downforce generation. It features a radically scooped lower section and incorporates a competition car-inspired splitter, dive planes, floor wings and louvres to boost the efficiency of both the sides and the underbody.

The Aerobridge on the car's front flank has been redesigned to increase the energising effect of the air flow along the top of the sides, while at the rear, louvres on the wheelarch create a depression that extracts air from the inner wheelarch, thereby increasing the efficiency of a section of the underbody that is usually little used in generating downforce.

The rear spoiler is now 60mm longer and 30mm higher, while the rake of the rear screen has been made more vertical to extend the surface area over which the spoiler can generate downforce and to capitalise on its advantages more effectively. The concave curvature of the rear luggage hatch either side of the rear screen further enhances the solution.

Three pairs of GT-racing-derived strakes have been adopted on the aerodynamic underbody and are responsible for 30% of the increase in downforce compared to the F12berlinetta. The rear diffuser has been completely redesigned and now sports a system of three active flaps. It has been split into three channels and features curved fences and vertical splitters to boost the power of the vortexes and enhance the expansion of the flow in the horizontal plane. This radical aerodynamic design work essentially created a whole new car that also marks a major stylistic departure from the F12berlinetta.

Designed by the Ferrari Styling Centre, the new F12tdf has particularly imposing yet sensual forms, the product of Ferrari's continuous commitment to melding sculptural beauty with functional demands.

All of the bodywork panels, from the chiselled nose to the tail, have been revised. Wider front and rear tracks also give the car an even more aggressive stance.

In terms of the formal design language, the objective was to create a sophisticated interaction between the sculptural surfaces of the F12berlinetta and a more graphic treatment of the various new aerodynamic features. The best testament to this intent is the evolution of the Aerobridge, the design of which is further enhanced by the use of bare carbon-fibre. Developed in such a technical manner, this component combines with the other details in creating a coherent aesthetic approach to the whole car.

The car's uncompromising sportiness is expressed with the same degree of purity in the deliberately Spartan cockpit. The wrap-around effect that embraces the driving position is intensified by the use of carbon-fibre housings for the instruments and satellite pods. The door panels have been pared back to a single carbon-fibre shell, while the glove compartment has disappeared to be replaced by simple knee padding. Alcantara rather the traditional leather was chosen for the cabin trim, technical fabric for the seats and patterned aluminium instead of mats for the floor, once again with the aim of saving every last ounce of weight.

The F12tdf's specification is completed by lightweight alloys with five twinned spokes that are designed to have the narrowest section possible to reduce unsprung weight.

* Engine power is expressed in kW, as defined by the International System of Units (SI), and in cv (1KW=1.3596216 cv). With dynamic ram effect
** With optional lightweight options
*** ECE+EUDC with HELE system 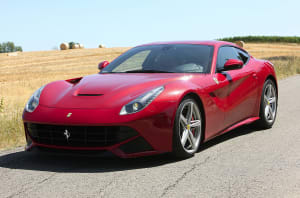