Matthew Askari
The SLS AMG was once the jewel of the Mercedes-Benz performance lineup, a commanding supercar the presence of which could be felt a football field away. The AMG GT has taken that crown with its seductive 4.0-liter V8 biturbo engine – a veritable bulldog cloaked in an alluring silhouette. But Mercedes was always clear: this was a Porsche 911-fighter. It was even called a "baby SLS." Now it appears in the world of three-starred performance halo-cars, Mercedes may be playing its own Game of Thrones.

To be clear, the GT will remain top dog for some time to come, and that lineup "will expand," we're told. A Black Series is still at least a year or more away, and we could see another model in the AMG GT family beyond that. But a recent conversation with a Mercedes-AMG product planner in Austria revealed that a new halo car is in the works, one that will slot above the GT.

It will likely draw power from a new 12-cylinder that's now in development, one that will be mated to an electric motor and battery pack. This ultra-hybrid setup could boast the greatest performance of any Mercedes yet. Crucially, it will have better fuel economy, good enough to justify its existence in an increasingly stringent regulatory environment.

As for the new 4.0-liter V-8 in the AMG GT, you can expect to see a lot more of it, starting with the E63 AMG, sometime after the next Mercedes-Benz E-Class launches next year. 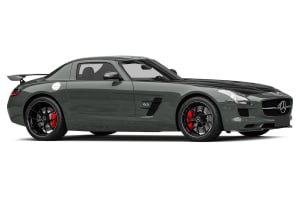