Comeback of the Year? First new Borgward will be an SUV

Mathias Ebeling
After a 55-year absence, a reborn Borgward will return to the circle of internationally renowned car makers. Its first strike: an SUV. As reported, the German brand is being revived as part of a new cooperation with the Chinese car manufacturer Beiqi Foton. Borgward has established its global headquarters in Stuttgart.

Borgward has released some photos in advance of the SUV's debut at the 2015 Frankfurt motor show. In one photo, Christian Borgward, grandson of brand founder Carl F.W. Borgward, stands next to a well-camouflaged SUV. Details of the new Borgward have not been announced, but it is expected to be available with 2WD and 4WD, powered by gasoline and diesel engines as well as a plug-in hybrid powertrain. The new Borgward will be manufactured in China, with design remaining in Germany. The car is to be available first only in the Chinese market, with availability in other countries coming later. 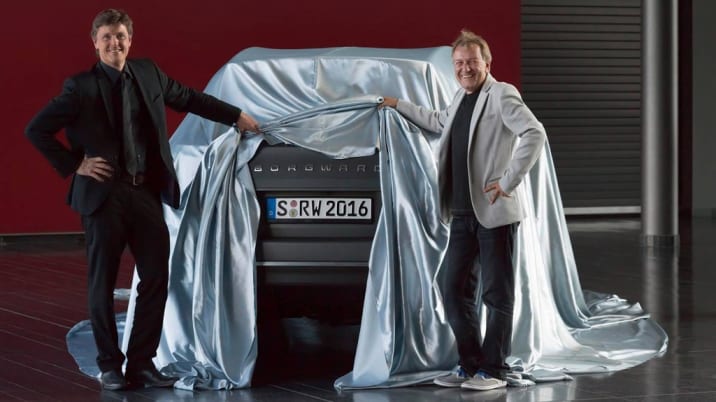 "I am convinced that Borgward will recover its place on the international automobile market," says Ulrich Walker, ex-Daimler-Manager and now chairman of the board at Borgward.

Critics are more skeptical about the chance for a glorious comeback, in part due to the founders, Christian Borgward and Karlheinz Knöss, lacking automotive backgrounds – Borgward is a beverage reseller in Wolfsburg, while Knöss is a free media consultant. The high-flying plans sound very ambitious, with a goal of selling 800,000 cars worldwide by 2020, and twice as many by 2025. The founders say that two new Borgward models will hit the market each year until 2020.

"I am utterly amazed about these grandiose announcements," said industry expert Ralf Kalmbach of the consulting firm AT Kearney in an interview with the Stuttgarter Zeitung. "In my opinion, there is a lot that doesn't fit together."