We Sit Down With Rob Dickinson To Talk Targa

We love Singer. Frankly, if you're a Porsche guy, or just a car guy, and have seen any of the Porsche 911s that have been restored and "reimagined" by the Californian company, you probably do too. So you can imagine our excitement in getting an exclusive first full look at the latest Porsche 911 restored by Singer.

The car you seen in the photographs above is a special thing beyond the obsessive Singer restoration treatment. It's the first Targa the company has ever restored. Plus, this car is one of the first with a modified 4.0-liter flat-six, making around 390 horsepower and 315 pound-feet of torque. With a body clad mostly in carbon fiber, the ultra-lightweight Targa is as modern under the skin as it is retro to the casual observer.

The liquid-pewter beauty makes its debutant turn tomorrow at the Goodwood Festival of Speed. We sat down with Singer founder, Rob Dickinson, to pick his brain about the new Targa, where his love of Porsches started, and about the punk-rock car company he's building in SoCal. 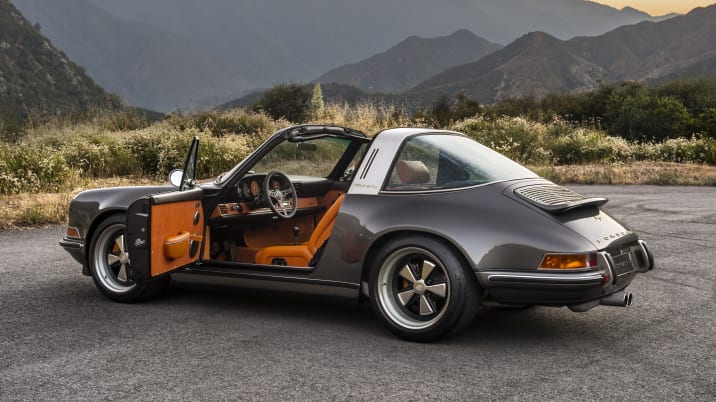 Autoblog: Tell us a little bit about the car. It's a 911 Targa, obviously, but tell us about what's special beyond that.

Rob Dickinson: This is the first time one of our clients has requested that we restore his Targa rather than his coupé and so we did. We always had hopes that we could get our fingers on a Targa and it's the first of a few that are coming down the line now, such that you'll see the second one at Pebble Beach in August.

It's basically a faithful rendition of the work that we do on the coupes. The Targa presents us with new challenges, but also an opportunity to add our jewelry to the car. Obviously, that iconic Targa hoop – that was rendered in stainless steel on the original 911s in '65 – we now render that in nickel, which is I guess part of our calling card, our signature. All the brightwork we do on the coupes is in nickel and we're following that principle with the Targas as well.

Just for the sake of injecting a little bit of uniqueness into the Targa hoop, we render it with two cool, air-filtering louvers, rather than three, which the early 911 had. Which we thought was a cute little touch that is somewhat different from the early 911s and very different from the later 964, which didn't have any louvers in it at all. 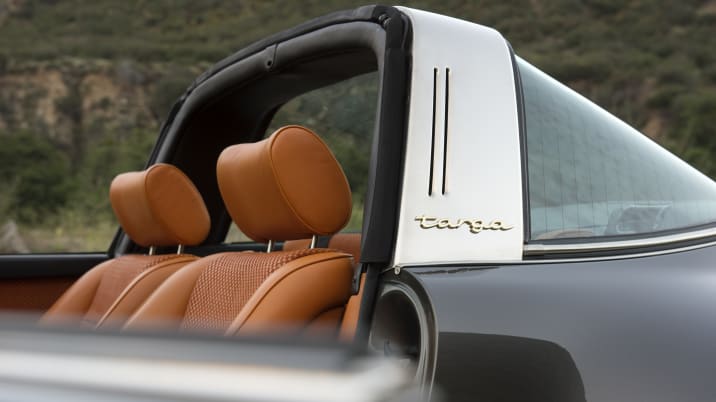 AB: That's Porsche nerdiness in the extreme. In a good way.

RD: Thank you, yeah. It's one of those things that won't be noticed by many but will be noticed by a few, and that's an insider's thing. It's something – that little bit of whimsical, insider neurosis – is something that we like to try and include everywhere on the car.

The other thing that's unique about the Targa is that, as well as the traditional collapsible Targa roof panel ... is the lift-up panel we've also done. We've introduced a second Targa top, which is made of carbon fiber... It's a beautifully executed carbon piece with a proper headlining in it and a proper convertible cloth covering and makes the car just look a little bit sharper.

AB: Let's move on to the engine.

This particular car is one of the first handful of cars that have the 4.0-liter engine. It's a very highly specified car. I think you may have seen that the car performing very well for Road & Track. The Targa contains that same engine which of course is rebuilt. It's the 964, 3.6-liter engine that's rebuilt by Ed Pink to this spectacular 4.0-liter specification. As usual, the engine number is the original case from the car that we started with. So the numbers for the engine match the numbers for the chassis – something, again, we're quite proud of for each of the restorations that we do. 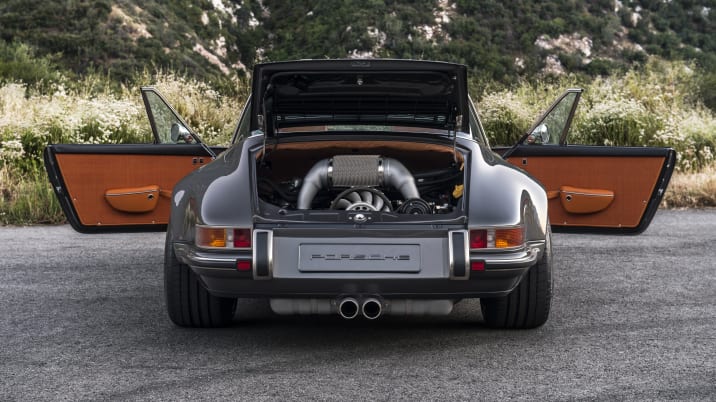 The car has a six-speed gearbox from the 993, and it has the Öhlins suspension that we have been working very hard to refine. We feel the 964 Targa chassis, the monocoque is extremely stiff and has responded very well to our work.

AB: Is there anything else, mechanically or otherwise, that we've never seen on a 911 restored by Singer before?

RD: Not mechanically, no. You're seeing some bodywork, obviously, that we haven't seen before on the car. The Aria Group, who are based in Irvine, CA – our long-term composite, bodywork, and paint partners – have done a spectacular job on rendering the carbon fiber for the Targa. There's new surfacing on the rear fenders and the rear quarters of the car, which is being spectacularly executed as usual for their amazing standards.

Again, Aria [is] one of the many partners that make us look very good. Whether it's Ed Pink, whether it's Little John who does our interiors, we have this amazing access to first-class artisanship and craftsmanship here in Southern California that makes this car possible ... Obviously the devil is in the details, but also ... bringing the details together.

That's what our incredible team here at Singer, where we restore the cars, make happen and again. The team at Singer, now which numbers over 40, are an incredibly talented bunch that bring all these disparate contributions from all over California together and execute these cars to these amazing standards for us. 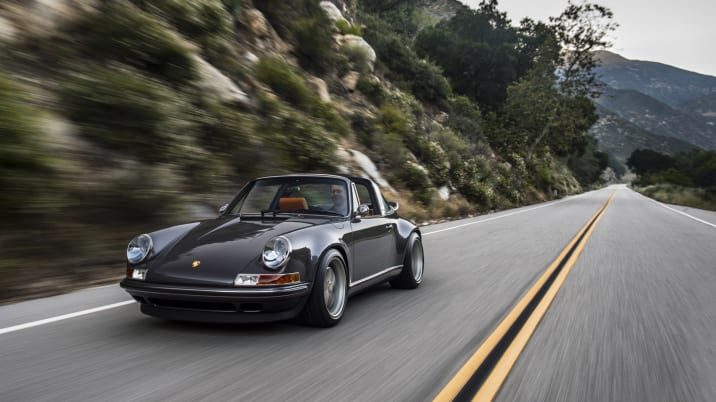 AB: I've got to say that there's something that's always been very Californian about the cars. Something that screams West Coast in the final presentation.

RD: Yeah, I think so. And of course you know this is the biggest market on planet Earth for Porsche. When I moved to California and when I moved to Los Angeles in 2003, and built my own little hot-rod 911 – which was very much the genesis, if you like, for Singer – it was very much informed by the amazing car culture and the amazing culture of the 911 here in the Los Angeles area ... The optimism and the sunshine and everything else that goes with the California lifestyle. I think that sense that we can dream here in California – dream and make things a reality here – is important to why we exist ... and probably why we're having this conversation. Of course, the Targa being a convertible of sorts obviously makes a huge amount of sense here in California.


"It was such a Porsche signature; that fishbowl of a rear window and that polished hoop that supported that big hole in the roof. It was quintessential Porsche for me."

AB: You did an interview a couple of years back with Tamara Warren where you referenced falling in love with Porsche as a kid. You mentioned that it was a 911 Targa that you saw on the road that really kicked off the love affair.

RD: Absolutely so. For me, as a kid in 1970, that experience, that was Porsche. It was such a Porsche signature; that fishbowl of a rear window and that polished hoop that supported that big hole in the roof. It was quintessential Porsche for me. And every car, every Porsche 911 I saw that wasn't a Targa in those early days was kind of weird because ... it didn't have those signature features.

AB: You're headed over to England next week. Is there a particular reason why you chose the Goodwill Festival of Speed to show this off?

RD: No, the stars aligned. The owner of this first Targa was anxious to participate. We have a customer-owned coupé in England – and that customer was happy to make his car available, too. We have got Chris Harris, Marino Franchitti driving the 3.8 UK coupé up the hillclimb at Goodwood, with the Targa on static display on the Cartier Lawn. We're pretty well covered. The generosity of both owners to participate made this possible and the Goodwood Festival of Speed is a fabulous event. This is the first time our customers have had the opportunity to show our work in England and the stars seemed to align and so we've gone for it.

I think there's some excitement around the cars being there which is very exciting and rather humbling. I think Lord March was personally quite excited about the cars being part of the Goodwood event this year. Again that's very, very, flattering for us. It will be interesting to see the reaction.