Autoblog Staff
A suspect was arrested Thursday in the killing of a Las Vegas mother of four who was gunned down a week ago in a road-rage shootout after giving her daughter a driving lesson, police said.

Police Capt. Chris Tomaino said the suspect was arrested around 2 p.m. at a home about a block from where Tammy Meyers, 44, lived.

Meyers' husband showed up at the scene and attempted to cross the street in front of the house but he was held back by police. He then yelled, "There's the animal, a block away."

The suspect was being taken to police headquarters to be interviewed. It's unclear if the man was believed to be the shooter.

Earlier, SWAT teams had surrounded the home and authorities tried to contact him using a bullhorn to get him to surrender.

Police have said Meyers was shot in the head in her driveway Thursday after confrontations that began when she was giving her teen daughter a driving lesson and the girl honked at a driver she felt was speeding.

Police say it was a two-way shootout after Meyers roused her son to grab his gun and go looking for the driver. 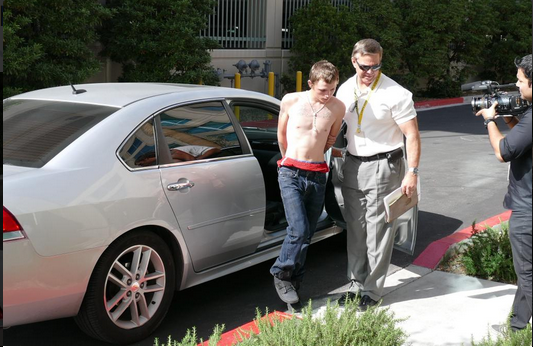 Associated Press contributed to this report.