It's been 26 years since Mazda showcased the original Miata at the Chicago Auto Show, and now it's returned with a conceptual take on the new model, decked out with all the accessories and optional equipment your roadster-loving heart could desire. Or at least some of 'em, anyway.

This show car is painted Ceramic Metallic (Zoom Zoom-speak for "white") and spec'd out with a full aero kit (including front air dam, side sills, rear skirt and lip spoiler) all done up in gloss black, 17-inch BBS wheels and Brembo brakes with red calipers. Mazda is also showcasing a carbon-fiber luggage rack for the new MX-5 that weighs less than two pounds and includes and integrated brake light.

"The concept parts and accessories we have showcased at the Chicago Auto Show," said Mazda's North American chief Jim O'Sullivan, "were developed to give customers a look at what is possible for the new cars to make them truly one-of-a-kind, adding to that excitement." See them shown off in our high-res gallery of live photos, above.
Show full PR text
MAZDA UNVEILS 2016 MX-5 MIATA ACCESSORIES CONCEPT DESIGN AT CHICAGO AUTO SHOW

At the Chicago Auto Show, Mazda revealed a 2016 Mazda MX-5 Miata accessories design concept for the next-generation roadster that will hit showrooms this summer.

"There is so much MX-5 history at the Chicago Auto Show, and we wanted to continue building on that," said Jim O'Sullivan, president and CEO, Mazda North American Operations. "The MX-5 is the soul of our company, and its enthusiast following both inside and outside of Mazda drives us to keep innovating new ideas for it and the rest of our lineup."

Painted Ceramic Metallic, the 2016 MX-5 accessories concept will be on display from Thursday, February 12 through Sunday, February 22 and includes an Aero Kit, BBS Wheels and Brembo Brakes as well as a Luggage Rack shown separately in Mazda's display. MX-5 concept accessories include:

The 2016 MX-5 has evolved to meet the needs of today's customers, yet it retains the pure fun-to-drive nature of its predecessors, whether cruising on the highway or the racetrack. With the new roadster, Mazda's engineers sought to capture the essence of the beloved first-generation MX-5 Miata, reducing overall length of the 2016 model by 4.1 inches to make it about the same size of the original. Engineers also reduced the MX-5's weight by about 150 pounds versus the outgoing car, lightening and strengthening even the smallest parts.

"For our next-generation MX-5, our designers and engineers obsessively focused on heightening the joy that comes with driving our signature sports car," said O'Sullivan. "The concept parts and accessories we have showcased at the Chicago Auto Show were developed to give customers a look at what is possible for the new cars to make them truly one-of-a-kind, adding to that excitement." 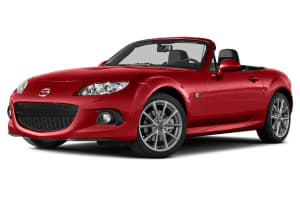